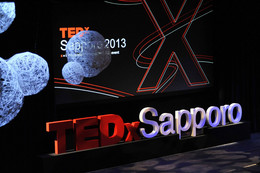 The difference between who you are and what you want to be is what you do.
We can never change things unless breaking the existing reality.
To create something, we need to build a new model that makes the existing things obsolete.

BLACK is a world Yo-Yo champion, performer and a traveler of extraordinary passion and determination.

Hiroshi Ishii is a Jerome B. Wiesner Professor of Media Arts and Sciences, at the MIT Media Lab.

17-old-high-school-student, she visited Nepal and joined an NGO involved in literacy education for women.

Tetsuya Kaida worked for Toyota for nearly 30 years in several divisions, including service, marketing development and product planning. Among his many accomplishments, in 2002 Kaida embarked upon restructuring global Motor Shows by using concept cars and innovative space design.

An independent scientist who has two Ph.D.s (Medical Science and Media Design.) Developed the MN-128 series (digital communication equipment sold by NTT) that triggered the spread of the Internet in Japan, and established the Japanese first digital certification authority company.