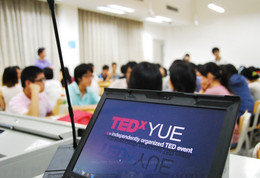 What is TEDxYUE, and why?

Inspired by the idea of TED, a team of students from 29 universities and colleges in Guangdong Province, China joined together. Their purpose is to hold a TEDx event which can attract more audience telling them that there is something called TED.

Their event is called TEDxYUE. YUE is the abbreviated name of Guangdong Province, and Oliver Ding, the co-founder of TEDtoChina, advanced this name of TEDxYUE, saying that YUE also means “Youth, University, Eagerness”.

Although TED received world-wide popularity, but its fame in the campus in China is not at parity with other more distinguished acronyms from western countries, like NBA, LV, or OMLG.

So the first target of the TEDxYUE event is to promote TED in the campus by holding a TEDx event, hopefully this could help more students, although still hesitate in embracing TED due to the language barrier (still remember Jay Walker’s TED Talk on the English Tsunami in China?), be informed that there is something good on the internet besides Renren.com and Youku.com (the Chinese version of facebook and youtube).

Another target of TEDxYUE can be reflected by its stated mission: “Better Education, Equal Opportunities”.

In reality, there is no solution for this: since the educational recourses is limited, the government of course want to invest them into the best colleges, allowing them to compete in the international level with the prestigious names around the world.

However, the information age, as the ‘Next Society’, can offer a solution, and TED is essentially the educational brand which is part of the answer.

The wish of TEDxYUE team is through sharing, watching, and discussing TED talks with students from different universities can join together to form a tribe of curiosity, of eagerness for knowledge, of the passion to change the world through ideas and actions, to form an invisible college without the border of knowledge segmentation and so-called discipline, to self-develop a new kind of education based on learning the wisdom from the TED talkers, a TEDUCATION.

That is why we have TEDxYUE.

TEDxYUE: how?
TEDxYUE will be held in 5th, September, 2010. What distinguished TEDxYUE is that there is no invited speakers for TEDxYUE.

Each individual organized team at the campus is responsible for carrying out the promotion and execution of the TED-replay. All the resources were provided by an online platform.

The idea of TEDxYUE won the “3rd Google Gong1Chuang1 Innovation Competition for Social Good”, and became one of the 30 team out of the 18200 applications from 1060 universities and colleges in China. Google CSR will be the sponsor of the TEDxYUE event.

In the future, we are planning to develop on-line learning community based on TED material. The idea itself was first exhibited in Wiser Summer 2010 at Peking University and won the “the best social value award”, as well as identified as "Happy China" Social Welfare Project by Nanfang Weekly.

The first step is to cooperate with Social Learn Lab (http://sociallearnlab.org/), an online education community for educators in China, to advance a weekly on-line watching and discussing TED activity. Also, we have a digest in Chinese of 100 most popular TED talk for newcomers to know what is available out there in the TED treasure (http://blog.sina.com.cn/tedxyue).

We truly appreciate if you have ideas or suggestions for TEDxYUE, please email: yukai@tedtxyue.com.

A disabled student who fought his way into university

A philosophical student from SYSU

A Research & Professor of Social Science from Jiaying College

An artist using cartoon to record the local culture of Guangdong