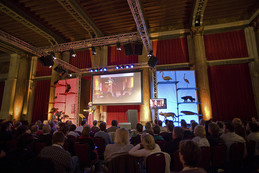 250 seats in the marble room of the Antwerp Zoo
A big screen in Antwerp Central station simulcast + free TEDxFlanders Roast coffee for passers-by
Streaming online by Canvas.be (http://programmas.canvas.be/tedxflanders-live/)
12 speakers, 4 music performances
Graphic recording
Media attention (newspapers, television, blogs)
Networking and community building opportunities
Coffee, lunch, parting gift
=> For Free!
How did I do this? I must admit that I really can't explain it!
But here's the story:
I gathered people around me who were familiar with TED and told them "You see, I'm doing this TEDxFlanders thingie, and I've been doing this pretty much alone" and "Well, I don't know what you peeps want to do with it, but any help would be nice"
And help I got!
Such an amazing bunch of talent:
Byron, a connector, knowing people from all kinds of businesses and
industries
Hans, a marketeer, seems to conjure sponsors with his fingertips
Thomas is an event organizer, and took most of the upscaling in his very able hands and mind.
Vincent is a teacher and a Drupal expert and took care of the site
Jan and Lisbeth did all the promotion and press...
ianka is an actress and will do the presentation, and did all the preparations.
Erik, a surgeon, helped us with so many extra's and his wisdom as the eldest of the crew
Denis did all the printing work, and let his company work for us for free... (ok, as sponsorship, but hey...)
And Roel proposed to take care of the volunteers...
So everything was taken from my hands...
I only gave trust and "carte blanche"
Ok, I did the speakers... and meetings, and mailing...
And I forget to mention all the smaller helping hands and pieces of advice.
You know, when passion spreads, it's like rolling a small ball os snow downhill

This was the result!
The process and preparation was so much fun, I could hardly believe
anything could go wrong
And aside from a technical delay, It didn't!

Arnaud Petre graduated in psychology (UCL). He worked there as a researcher in cognitive psychology for seven years, meanwhile he entered the marketing industry to apply his scientific findings. He is also a professor at JMCU

As a designer, media artist, writer-director and strategic design consultant, he explores conflicting constraints in evolving and hybrid contexts, via his design label Architempo. From hi-tech interactive installations to lo-tech mise-en-scene, he is dealing with storytelling in multiple media, place and technologies.

Merger of art, technology and biology, by entangling living organisms such as plants and cockroaches with games and digital glitches. Works with ESA to explore possibilities of ecological habitats on space voyages. TED Fellow, Teacher at Sint-Lucas Visual Arts in Ghent and at the University of the Philippines Open University.

Captain Drappier is a former Sabena management pilot. He is Vice President Training and Flight Operations, has 12500 hours flight experience, and flown all Airbus types from the first A300B2 to the A380, and is instructor on all Airbus aircraft.

BOX (Baroque Orchestration X) is an artist collective exploring the full potential of early music instruments today, putting them in unorthodox settings and bringing them to a different audience. They made their first public appearance on our stage!

Thomas Van Hoofstadt is a young engineer and organizer of OckxFest He works as operations engineer designing the world's fastest and easiest to use remote sensing solution, based on the X100 light unmanned aircraft.

PhD. Ellen Decaestecker is teacher in Zoology, Ecology and Evolutionary Biology She specializes in Host-parasite co-evolution and organizes international conferences

Together with Tom Barman he co-founded Belgian Alt Rock band dEUS. He left dEUS in 1996, concentrating on his own band Zita Swoon (previously A Beatband, and then later known as Moondog Jr.) which he founded in 1991 with drummer Aarich Jespers.

The Golden Glows is an acoustic three piece, keen on long gone melodies, with a focus on vocal harmonies. They come from the diamond mines of Antwerp, Kingdom of Bubblicious Belgium.

A design engineer with lots of personal energy, empathy, and intellectual curiosity. In 2000 Serge founded Futureproofed, a sustainable design consultancy based on one central thought: mainstreaming sustainability.

Belgian, internationally renowned, conceptual artist. His groundbreaking work deals with diversity and identity. Over the past decade Vanmechelen has collaborated with scientists from different disciplines. That earned him an honorary doctorate at the University of Hasselt this year.

Lars' passion is Public Speaking. As the 5-times Belgian Champion of Public Speaking with Toastmasters International, he speaks on the subject in keynote addresses, seminars, and lectures. With a background in Business and Social Sciences, Lars encourages us all to take the stage and share our ideas.

Master in business administration. His entrepreneurial activities span business, culture, science, politics and the environment. Pioneer of an ecological factory. Founder of ZERI (Zero Emissions Research and Initiatives) at the UN University in Tokyo, redesigning production and consumption into clusters of industries inspired by natural systems.