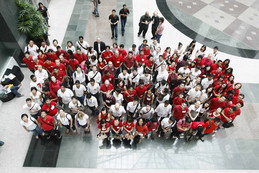 "The Substance of TED Unseen" was TEDxSingapore's forth idea event.

We showed aspects of TED that you would only experience when you attend a TED conference:

Meet and hear the experiences of Tino Chow, a Singaporean and TED Fellow

Insights into TED Conferences from TEDsters.

As a mass community activity, we asked everyone to come dressed in TED red and white and formed a huge TED logo made of TED fans.

Our venue host was Singapore Institute of Management

Tino is a designer, thinker, TED fellow, entrepreneur, educator, movement starter and trouble maker. He now run a design consultancy and a design magazine. Born in Singapore, grew up in Hong Kong, served in the military before coming to America for his design education at Rhode Island School of Design. In 2008, he helped found a national conference called A Better World by Design bringing 300 people from around the country who were redefining the social and environmental realm. Building upon the success, the conference attracted 550 people in 2009. In 2009, he was nominated as a TED Fellow. Tino then started BIG NEW IDEAS, a design consultancy, working with non-profits and companies making their idea happen. He then cycled 4,000 miles from Providence, RI to Seattle, WA raising money and awareness for affordable housing.

Coleman Yee is one of those people who are interested in too many things. Previously an educator at a polytechnic and still an educator at heart, he has given talks and workshops on a dazzling array of topics, from programming to design thinking, from information architecture to photography, from social media to pedagogy, among many other things. He still fondly remembers his first-ever talk - where he was rudely interrupted by a heckler who wanted him to hurry up, just as he reached the midpoint of his talk. During the day, Coleman is a Web Shaman at Digital Boomerang, helping government agencies improve their websites and do less evil online. At night, he catches up on his many interests (or at least he tries to, as he usually just falls asleep). He doesn't know what he wants to be when he grows up.

Born into a 5th generation entrepreneurial family, Joshua is a serial entrepreneur himself. Through his investment holding company, he invests and nurtures innovation-based companies in Asia. One of his pet projects now is working with a cross functional team in the US, Europe and Singapore to build technologies that promises to be able to peer into the minds of consumers before they can anticipate a need. He dabbles in several innovative start-ups and invests in worthwhile projects through his holding company.

Brett is a husband and a father. He is a travel marketer and angel investor focused on online travel technology. He is a kite surfer who has been traveling the world for more than 12 years following the wind. Brett is an MBA who deeply appreciates the experience and relationships

Alison Lester has been performing improvisational comedy for the last 12 years, and teaches these skills to her communication training and coaching clients to improve their mental agility, flexibility, and confidence. Improvisation has also loosened her up as a writer: her collection of short stories, Locked Out, was published in 2006, and she has just finished a novel. She recently wrote the script for A Singaporean in Paris, a cabaret starring Hossan Leong, which is being produced by Sing'Theatre and will be performed at the DBS Arts Centre in April. Additionally, she is directing the voices for a new children's cartoon and managing the dynamics of living with two teenagers and a small dog. She was born in the United States and has lived in Asia for 20 years.

Daylon Soh is most passionate about subject matters that challenge him intellectually and creatively and enjoys sharing the joy of being a design thinker; likening it to a journey as rewarding as mastering a new language. As an Account Executive at TILT, a design studio, he practices a holistic approach in tapping into the expertise and experience of project stakeholders to create unique tailored solutions for his clients consistently. His interest in design, photography and Toastmasters has garnered him several accolades -- most notably an Official Selection title for his photo essay