Saturday 15th September saw the convergence of people and ideas at Bristol’s M Shed. After months of preparation the day was finally upon us and it was all to play for! Not only did we have some fine speakers and performers but we were lucky enough to have a great view of Bristol from the top of the M Shed museum.

The event commenced with introductory videos on the TEDx phenomena, the idea of radical openness and some futuristic poetry from Bristol-based spoken word artist, Greg Bryce.

Our first two speakers, Stephen Hilton of Futures Group and Penny West of Knowle West Media, discussed local themes regarding Bristol and paid special attention to future community engagement. Stephen showed us the video that showcased Bristol’s bid for European Green Capital. As he explained we came second in the end (behind Copenhagen) which wasn’t bad considering the fact Bristol was competing with many larger cities around Europe!

Our next two speakers took more technological futuristic themes. Ian Forrester of BBC’s Research and Technology explained the concept of ‘Perceptive Media’ and how media will be personalised to the end- user. Professor Alan Winfield of Bristol University Robotics Lab illustrated the challenges faced in creating a robot with human characteristics. Bicentennial Man may be some time off unfortunately!

During the break people had a chance to have a look at a 3D printer demo by Sysemia Ltd over a cup of tea and biscuits.

Our following speakers took more environmental themes. Dr Steven Lake showcased his documentary ‘Drying For Freedom’ in which he champions the use of clotheslines as opposed to tumble-driers! Jacqui Reeves of Fairshare informed us of community projects to reduce food waste and discussed the current scale of food wastage. John Troyer of Bath University talked to us about Death and how future cemeteries would have QR codes and augmented reality. This talk was a bit on the morbid side but positively informative at the same time!

The event then took another technological twist with Tre Azam of Myndplay. He talked to us about ‘mind control’ (though not in too much of a scary way) and showcased his mind-controlled movie and video platform. According to Tre’s research free-runners have the best mind control skills. We suppose they’d have to as they find themselves running or falling into things more often if they didn’t!

Performers Mike and Matt of the Play People then entertained us with the concept of ‘FutureShack’; an impenetrable home which could survive anything from an earthquake to a nuclear attack though seemed to be lacking just about everything else!

Next up was self-confessed aerospace geek, Colin Sirett of Airbus. His talk discussed the challenges of ‘future flight’ both from a perspective of meeting environmental issues and consumer demand. Social Entrepreneur, Ali Parsa then discussed themes of business vision and mobilising people for action and social good. Dr Steve Simpson and Judith Randel returned to environmental and sociological themes on ‘our impact on the world’s oceans’ and ‘Global Poverty Eradication’ respectively. Daniel Steeves’ talk on the ‘translating technology’ focused on cloud technology and data creation…. with the help of one or two gardener and cleaner metaphors! The last talk was given by Jaya Chakrabarti discussing the Bristol Manifesto along with her great affection for Bristol (and not so much for Watford where she is from!).

Spoken word artists, Jane Mcleod and Greg Bryce, rounded the event off with some poetry they had written during the event…. about the event.

After an action-pack day of idea-sharing some of us went over to Bordeaux Quay across the water for a casual drink. Phew!!! Roll on next year!

Stephen’s work focuses on Digital Innovation, Democracy, Economy and Environment in the Bristol area. He passionately believe that wide scale digital literacy can create a fairer, more inclusive, more participative society. He works with others to make this happen.

Ian is a well known character and asset in any role he takes on. He lives in Manchester, UK where he works for the BBC’s R&D north lab. He focuses on open innovation and new disruptive opportunities via lively engagement and collaborations with startups, early adopters and hackers.

Dr. John Troyer is the Deputy Director of the Centre for Death and Society at the University of Bath. His interdisciplinary research focuses on contemporary memorialisation practices, concepts of spatial historiography, and the dead body’s relationship with technology.

More a realist than a futurist, Daniel advises SMEs to transform and grow their businesses – and enable a different way of thinking – both as a Partner with James Caan’s Advisory Business as well as independently across the Digital, Social, Technology and IT sectors.

The common thread throughout her career has been either recycling, fashion, food, furniture and people. She is passionate about reducing waste and working for Fareshare South West ticks all the boxes of recycling food and helping people.

A graduate from the Arts University College Bournemouth (UK), Steven accolades include an honorable mention in the Guardian’s ’One minute to save the world’ competition and ‘Best Artistic Response’ for the National 2012 Climate Week Awards.

Jaya Chakrabarti heads up a Bristol-based creative digital agency called Nameless. Her talk will share ideas on leadership and the future of local democracy under the banner of A Manifesto for Bristol.

Alan Winfield is Professor of Electronic Engineering and Director of the Science Communication Unit at the University of the West of England, Bristol, and Visiting Professor at the University of York. He conducts research in swarm robotics in the Bristol Robotics Laboratory and is especially interested in robots as working models of life, evolution, intelligence and culture. 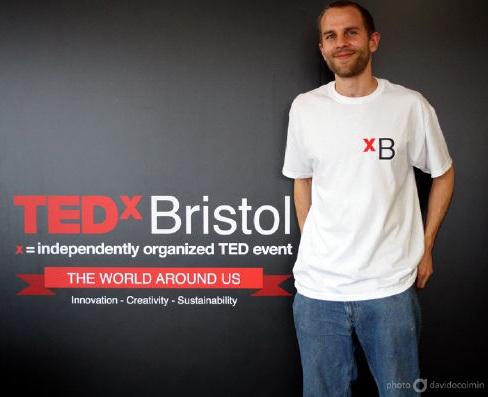