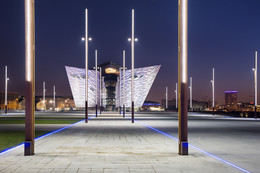 Working together even in small ways can create great things. That was one of the themes that emerged from TEDxBelfast held in Titanic Belfast on 6 June.

Speakers from Belfast, Vancouver, Kenya and Dublin presented their TEDxTalks at TEDxBelfast in the stunning yet still intimate venue to an audience of people from a range of disciplines including the creative industries, science, education, economics and community activism.

The famous staircase in the recently opened £90M Titanic Belfast was the backdrop for the nine speakers “Titanic Ideas” – the theme of the event. With the simple brief, one Speaker, one Talk, one Idea, TEDx and TED are a global phenomenon where people gather together to listen to short talks on the broad themes of Technology Entertainment and Design. TEDxBelfast is part of a network of events that span the globe.

Among the speakers was Colin Williams who produces children’s television programmes with a global audience of 200 million. He described growing up in Belfast, and how he was inspired by his own family to create television programmes that would do inspiring, educational and uplifting. The Creative Industries – are he contends – leading the way in the re-establishment of Belfast as a great international city.

Anne McReynolds, Chief Executive of The MAC, talked about the 14 year journey to establish Belfast’s newest arts venue, and how it was important to bring the right people together and to be as aware of what you don’t know – as well as what you do know.

Chris Horn from Dublin who spoke about how science and arts come together in The Science Gallery which he helped establish.

Colleen Hardwick, an urban geographer and entrepreneur from Vancouver, Canada, spoke about the crisis in public consultation and the need for evidence-based decision making. She showcased PlaceSpeak, an innovative new social media platform that connects citizens to decision-makers based on their geographic location.

"What makes a great TEDx event is a wide range of speakers and an audience with diverse interests who come together to listen and discuss. The word used so many times during and after was “inspiring” and that’s good enough for me." - Davy SIms

Thanks to the audience and the other speakers, too. Some stood in at less than 24 hours notice.

Chris Blake talking about his music work with children with autism

Nigel Hart medical doctor on the inspiration of climbing Everest