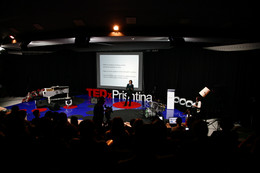 In its second edition, TEDxPrishtina will offer a safe arena where thoughts and ideas on social design and changes from the last decade and the future one, will transfer from a coffee place to a stimulating space, among a selected audience from the community of the enthusiasts of ideas worth spreading.

Like the unfinished houses, that can be seen on all the main streets of Kosovo, many times the social designs and changes start out with no good planning from actors that lack abilities. The citizens of Kosovo express this dichotomy among the very ideas applied in their country, while sipping coffee after coffee.

At TEDxPrishtina 2012, firm and finished constructions and well-thought plans will be presented by artists, publicists, academics, in addition to new and well-known names of different fields.

Sislej Xhafa is a contemporary artist known for his inquiry into the social, economic and political realities as they interact with the protean variety of modern society. His investigations use a minimal ironic and subversive language, utilizing indifferently a wide range of media, from sculpture to drawing, from performance to photography. Xhafa’s artistic research occupies a wide variety of issues, ranging from questioning the legal status Kosovo with his “Clandestine Pavilion” at the Venice Biennale to reflecting on the concept of security and stability with work exhibited in New York. Based out of New York, Sislej’s work does not merely reflect reality. Through his art, Sislej questions it.

Aida Bytyçi wants to tell you the greatest story ever written in four letters: A, T, C, and G. The four nucleotides making the DNA code are the core of the greatest book ever written, the Human Genome. Aida is a certified genetic counselor at the McKusick-Nathans Institute of Genetic Medicine at Johns Hopkins University in the US. Her time is divided between providing genetic counseling to patients and working on several research projects, such as one attempting to sequence the whole human genome to identify genes responsible for inherited syndromes and health conditions. As a genetic counselor, Aida provides support and advice to patients and their families on the inheritance and consequences of the genetic disorder. In this ideal position between research and patient care, Aida orients herself with the polar star of creative innovation brought by science and art. She believes that these two disciplines stimulate the mind and require a developed imagination to bring change in people’s lives.

As an aspiring poet, an active media practitioner, and last but not least a mother, Albana Shala has undertaken a journey of great proportions in her life. With first-hand experience in dealing with autism through her son, Albana strives to combine motherhood, writing, poetry, and an indefatigable sense of wonder for the human condition into one holistic package.   Albana brings to light a new and optimistic scenario for understanding individuals with special need in a context lacking prior history of such understanding. Based in tangible contemporary reality, she proposes a re-evaluation of obsolete values, seeking synergy and new means of communication in order to fill the gap of knowledge and ignorance of a bygone time.   Currently living in Amsterdam, Albana has been nominated and awarded by various prestigious institutions for her poetry, and she continues to maintain her determination and compassion for what she does.

January 2011 finds Ahmed on the streets side-by-side with many other Egyptians in their attempt to fight for social justice and democracy. Ahmed has mobilized his family and friends – a group of five – to march together for 20 kilometers to Tahrir Square. When they reach the downtown area, the group has managed to gather over 30,000 protesters. Ahmed was a member of the Trustees Council of the Revolution, an organizing committee of Tahrir Square protests. More recently, he has launched the Coordination Committee of the Masses, a joint committee to mobilize public opinion to pressure Egyptian interim authorities to fulfill the popular demands of the revolution. A firm believer that our generation has the potential to change the world, he is currently working on starting a school for young social activists to get educated on the practical side of politics and on how to impact policies. The effort to build something new comes with gaining momentum to change the old, and the persistence to follow change through. Ahmed comes to TEDxPrishtina to tell the story of Egypt during the Arab Spring and to talk about the challenges faced to fully implement the demands of the Revolution.

Kushtrim Ahmeti is a student of dentistry and a grassroots activist, whose idea has taken Turkey and the world by storm. By realizing the power of sheer will when paired with creative solutions, Kushtrim Ahmeti managed to bring about a shift in the way which individuals view environmental conservation vis-à-vis assisting the less gifted. Through a multi-layered and human-oriented approach, his “Collect Plastic Caps to Support Disabled People” initiative has turned 235 thousand kilos of plastic into around 1200 wheelchairs. The Plastic Cap initiative invites people to gather plastic caps, which are in turn recycled to produce wheelchairs for the benefit of disabled people, who cannot otherwise afford them. Currently, the initiative is expanding to 81 cities in Turkey and to 44 countries around the world. Kushtrim’s attempts to generate positive change in his surroundings are not limited to the Plastic Cap initiative. Lead by a vision that there is a need to make the world a better place by improving health and the socio-economic wellbeing of people, Kushtrim is coming to TEDxPrishtina to talk about the birth of a universal idea and its repercussions around societies worldwide.

Elvis Hoxha is one of the most visible representatives of a new generation of Albanian political thinkers. Elvis decided to dedicate himself to philosophy, while he was still studying chemical engineering at the University of Tirana. After graduating, he switched from the chemistry of the material to the chemistry of the intellectual. From Tirana, Elvis moved to France, where he graduated and then completed his Masters and his PhD. While in France, he was a lecturer of epistemology and also a member of “Art et Diffusion”, a research team at Maison des Sciences de l’Homme (Paris Nord), which studies the forms of sensitivity in relation with the mechanisms and within what is known as the industry of sensitiveness. Elvis believes that in order to talk about sendërtim*, a reference to “public” shall be established first. At a time when institutions, the city and politics are deflated from this concept, he puts the student at the center as marker of the public. He is a professor of philosophy, political philosophy and aesthetics at the Marubi Academy, at the Academy of Arts, and at the University of Tirana. *Sendërtimi is one of those singular words in a language that lose their character in translation. It’s meaning in Albanian is: bring to life, implement, fulfill. “Fulfill the ideal, the goal, the wish”.

When in the early 80’s, a long journey by train led Enver Robelli to Switzerland, what would happen to him 20 years later was as remote as his homeland. Since 2007, he is the Southeastern Europe correspondent for the German newspaper Süddeutsche Zeitung and for the Swiss national daily Tages Anzeiger. During the years 2001-2007, he was the foreign policy editor of Tages Anzeiger covering political, economic and cultural developments in the Ballkans and Turkey. Enver lives between the triangle Zurich, Zagreb and Prishtina, and travelles very often to Tirana and Sarajevo. While bringing a perspective from beyond the Balkan fences on the region he calls homeland, Enver considers his job to be a mix between obligation and pleasure. His work is present in other media, as well. From 1997, Enver writes columns and other pieces for the daily Koha Ditore. His writings have also been published in the German newspapers Frankfurter Allgemeine Zeitung and Tagesspiegel. An independent journalist, but not an indifferent one, Enver Robelli thinks that those unable to get angry are not fit to be engaged in public fairs, be it journalism or politics. He comes to TEDxPrishtina to talk about the role journalism plays in a society’s realization.

Nurhan Qehaja is a young contemporary artist and a vegetarian food ambassador. The latter role is a natural continuation of her attempts to use art and performance in exploring issues of one’s own identity, its relation to the body and to earth. Food, as well as art, enables Nurhan to grapple with questions on how we heal ourselves, what our relationship with food is, and how it leads to our self-expression. For Nurhan, food is a source of inspiration and an instrument of expression at the same time, as another type of medium among those she uses: photography, video, poetry, and her own body. Nurhan started her artistic career as a visual arts student at Auckland University of Technology in New Zealand. During that time, she collaborated in four shows with New Zealand young artists and also had two individual performances and one individual photography exhibition. Upon returning to Kosovo, Nurhan had a series of collaborations with fellow Kosovar artists, which were displayed in respected art spots such as Novi Sad, Serbia and Vienna, Austria. She only began to seriously experiment with vegetarian food five years ago. Faced with the challenges of vegetarians living in a meat-loving country like Kosovo, Nurhan decided to open the first vegetarian food shop in Prishtina. Her next step is to open a full-fledged restaurant. 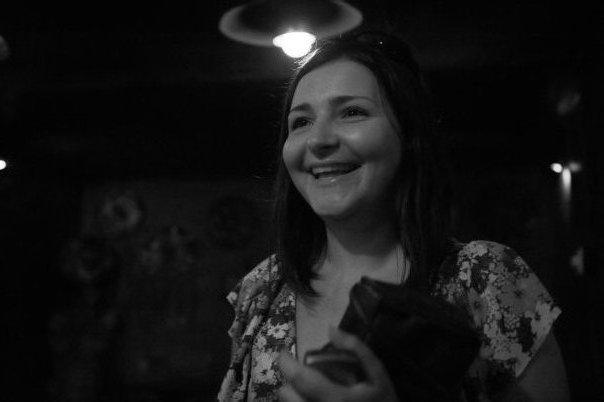 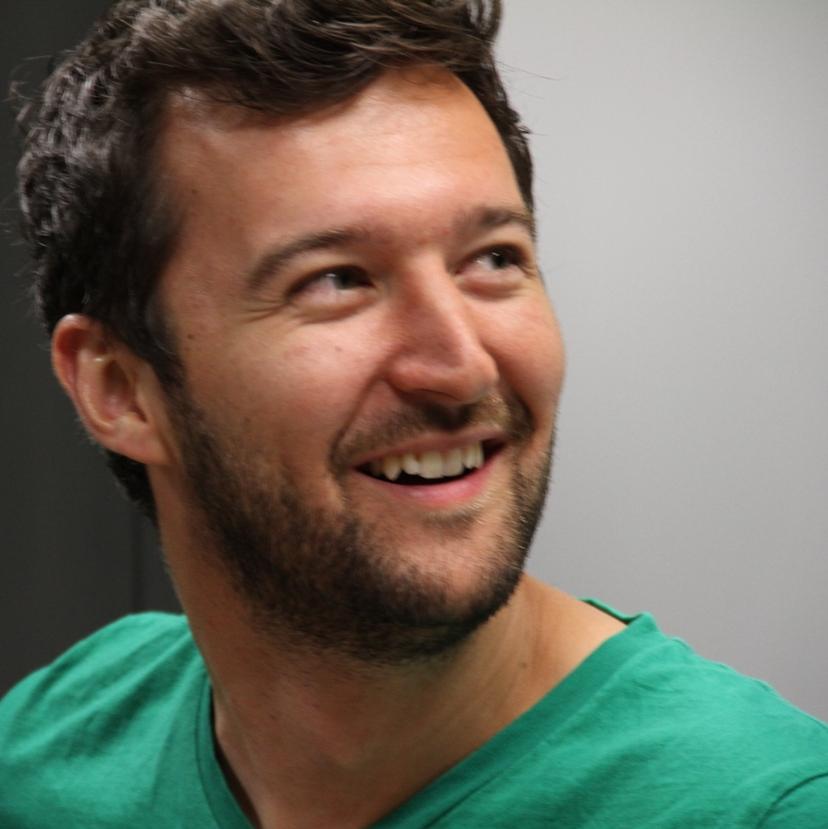