Innovation and optimism are the themes of TEDxFirenze, at the Palazzo Vecchio on November 12.
Innovation not only in science and technology but also in themes more closely related to the human soul, like art, music, entertainment, communication, etc..
Innovation means looking to the future and to do this we have to be optimistic (the other key ingredient to revolutionize, to change).
Every speaker's talk at TEDxFirenze will be in Salone dei Cinqueceneto, a place of innovation and optimism, a place where even Lorenzo il Magnifico, in the Renaissance, gave value to the power of ideas, a common mission to TED today.

The mission is to create a place where we give power and visibility at the ideas of 7 speakers who want change the world, representing optimism, freshness and innovation. We want to say to Florence and Italy to go back and come up again with their role as cradle of ideas.

The vision of TEDxFirenze has been shaped, constructed, and executed by people who care about TED and are in love with Florence. Over the following months, we will be posting insightful and inspirational TED talks from USA and from other TEDx.
Please bookmark this site and continue to read, share, and follow TEDxFirenze.

Marco Boglione, founder and president of BasicNet Group, was born in Turin May 9, 1956. His first work experience is at Maglificio Calzificio Torinese, a company in which grow up immediately, just 25 years he becomes sales and marketing director. During this period was born his greatest passion, that for computers, a passion that will be the focus of the business model of the future BasicNet. Infact in 1994, when he become owner of maglificio calzificio Torinese and founded BasicNet, creates a new business model. No longer a textile company, but networks of independent contractors connected with the holding company through the internet. A network of licensed partners who produce or sell in the industrialized world collections designed by the parent company, now owns as Kappa, Robe di Kappa, Jesus Jeans, Superga, K-Way, AnziBesson, Lanzer. Besides the activity of an entrepreneur, Boglione covers a range of institutional roles. Since 1995 he is member of the Council for Relations between Italy and the United States, between 2000 and 2006 he is chairman of the Torino Piemonte Film Commission and the Consultative Committee of the Faculty of Architecture. On June 2, 2010 President of the Republic, Giorgio Napolitano appointed him Cavaliere del Lavoro. In November of that year Boglione bought the Apple I, the first computer designed by Steve Jobs and Steve Wozniak in 1976.

Matteo Renzi (Florence, January 11, 1975) on September 29, 2008, he announced his intention to stand for election to the Democratic primary for Mayor of Florence. The young politician, declaring that if he lost the primary he would return to his old job (giving up what he called "privilege and dream of doing politics"), risks to loose the role of President of the Province of Florence that the PD had secured for a second term. Against all strategies outside of his party, Matteo Renzi wins the primary and subsequent elections, becoming by Thursday, June 25, 2009 Mayor of the City of Florence. During the first 100 days of his term he has already enter in history making totally Piazza del Duomo. Followed by the Palazzo Pitti. In the previous five years from 2004 to June 2009 he was President of the Province of Florence. He graduated in Law with a thesis entitled "Florence 1951-1956: the first experience of Giorgio La Pira, Mayor of Florence. Matteo Renzi thinks that communication is essential in politics. For this reason it's more than eight years that he dialogue with citizens, friends and supporters through Facebook and Internet. He believes in politics and in that wonderful phrase of Bono Vox, addressed to Blair and Brown, for whom "the politicians are the custodians of the dreams of the people."

orenzo Cherubini (Rome, September 27, 1966) follow his passion for music from an early age, performing as a DJ. He was inspired to rap, which he introduced in Italy, and became famous with his first hits "Gimme Five" and "E' qui la festa?", a prelude to album "Jovanotti For President" (by this time become known as Jovanotti) . Success comes with historical songs like "Ciao mamma", "Gente della notte", "Una tribù che balla" and "Ragazzo Fortunato". With the album "Lorenzo 1994" comes the updated manifesto of his thought, a combination of optimism and deep ideas: "Penso Positivo". While "Serenata Rap" becomes the love song of the year. After the tour with Pino Daniele and Eros Ramazzotti he founded Soleluna based, independent record label and multimedia production house. From this moment Jovanotti transforms his passion into a strong social commitment, supporting important causes. As with the single "Salvami", a song against the war, and "Buon sangue" (2005), the album dedicated to the writer-journalist Tiziano Terzani died recently. In 2008 comes the album "Safari", the best-selling album in Italy, but also the most purchased in the last five years with over 600,000 copies. In 2011 comes the new album, titled "Ora", the new manifesto: heart and music by Jovanotti.

Franco Cervelli, Pisa April 14,1950, during his last physical studies is interested in "Beyond the Standard Model", or try to find possible answers to some experimental observations,that are not easily explained within the current knowledge of physics particle. He partecipated to AMS-02 experiment which aims to understand the absence in the Space of nuclei of antimatter (which may have been generated in the early stages after the Big Bang) and to discover any particles that could form the so-called "dark matter ". Understanding these questions may contribute to the discovery of a completely natural way to create clean energy. His scientific activities are dedicated to experimental research in Physics of High Energy.

Selene Biffi is the founder of Youth Action for Change. She served with the UN, Amnesty International and AEGEE in the past in different capacities, supervising projects aimed at empowering young people in different areas. She contributed to a few published works on youth inclusion and participation and youth policies, and has been profiled in several national and international media outlets for her work. She has organised national and international consultations on youth participation on behalf of UNESCO and the World Bank. She was also included in ‘Fighting for our Future: Tribute to Young Women inspiring Change’ by MADRE, and received awards such as the “Young Woman of the Year Award” in 2004 by the European Academy of Civil Society, the prestigiuos 'Premio Isimbardi' of the Province of Milan (Italy) and has been selected as ‘ChangeMaker of the Month’ by Ashoka, the leading organisation supporting social entrepreneurs worldwide. She holds a Degree in International Economics and Management from Università Bocconi (Italy), and is currently pursuing the NOHA Master in International Humanitarian Action in Ireland.

The italian actress Monica Guerritore is known to audiences for her important roles (Jocasta, Lady Macbeth, Ophelia) and female characters of great strength, as Miss Julie by Strindberg and Marianne in Scenes from a Marriage bt Bergman, also directed by higher Italian directors, from Missiroli to De Lullo to Gabriele Lavia. She made her debut at fifteen years in the Giardino dei Ciliegi, directed by Giorgio Strehler at the Piccolo Teatro of Milan (1974). From 2001 to 2004 she collaborated with Giancarlo Sepe and bring in tour Madame Bovary, Carmen and The Lady of the Camellias, with great success with the public. Her television debut was in 1977 with the first RAI color drama directed by Sandro Bolchi, Manon Lescaut. In 2004 / 2007 she wrote, directed and starred Giovanna D'Arco, one of the shows most seen in the last theatrical season. In December 2007 begins to work with Ferzan Ozpetek in the movie "Perfect Day" while in March 2008 she has been called by Mimmo Calopresti to play the role of the mother of one of the boys killed in tragedy of the Thyssen-Krupp. On April 2008 she performed in Giovanna D'Arco to support the struggle of the Tibetan monks, as a response to the Dalai Lama's appeal. Now she's currently involved in the filming of "St. Augustine" in the role of "Monica" with Alessandro Preziosi and directed by Christian Dugay, Lux Films production. She brings in some Italian theaters a "lectio magistralis'' about Dante / Leopardi "Dall'Inferno the Infinite.", which she wrote. Rarely on television shows and debates, no social life she spends part of her free time to humanitarian causes. She's also envolved with the association Article 21 and Save Darfur to sensitize the fight in Darfur.

Maurizio Seracini is a diagnostician of Italian art. A '73 UCSD Alumnus, graduated in bioengineering from the University of California, San Diego(UCSD), he founded, in 1977, the first company in Italy for diagnostic and non-destructive analyses on art and architecture, the Editech srl, Diagnostic Center for Cultural Heritage in Florence.[1] Adapting technologies from the medical and military fields and other technical measuring instruments he has made possible diagnostics of art and search for art without destroying the artwork itself. Seracini has been well known for his search for the Leonardo da Vinci mural, The Battle of Anghiari in the Salone dei Cinquecento, Palazzo Vecchio, Florence.

During his University studies at the Faculty of Engineering of Florence, Federico Biondi launched its first own business at the age of 22 years, dealing with the implementation of software and applications for the fledgling Internet. He founded the company Megamente in charge of creating and implementing specialized software for the management of services related to publishing, printing and online services. Putting together the innovations that emerged from the use of applications designed for editorial services, with the new web trends, Federico Biondi has designed and developed just a new "social media network" that links and shared media communication of any kind. The new project, Qooid, has been online since October 6, 2011.

David Battistella is a canadian writer and film maker, he has italian origins. In 2010 he completed Bryan Adams: Bare Bones for the and created the web series ripperhockey.com, a series that tracks Canada’s most overzealous beer league hockey player. In 2002 he made the documentary Shinny: The Hockey in All of Us (that won the Banff World Television Festival Rockie Award) and is used as a teaching tool at Ohio State University. At the moment David is living in Florence, where he's studying Filippo Brunelleschi's life, and soon he'll made a film on his life. 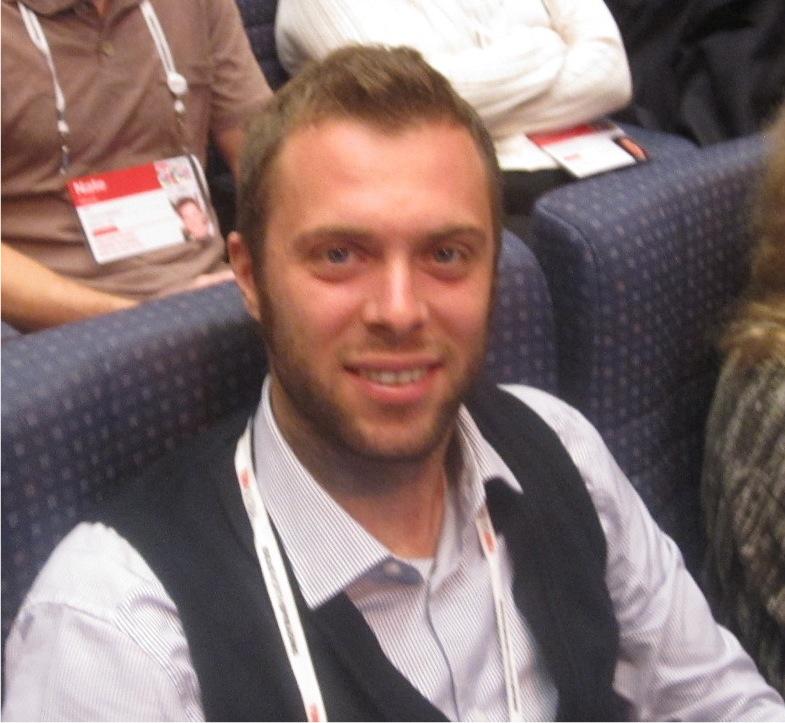