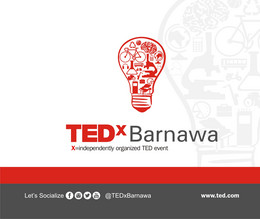 This Is a TEDx event taking place in the heart of Kaduna City, Nigeria, West Africa.

Is a Nigerian businessman, award winning musician and technology visionary who is best known as the e-business Entrepreneur. He is a graduate of Architectural Technology, Linton University Malaysia, and has attended various professional trainings both in the field of Architecture and ICT. He has worked with Mega Holdings an international company with presence in more than 30 countries and is presently the country agent in Nigeria. He is a professional speaker that has spoken in various events in around the globe, helping people understand the growth of technology and its effects. He is the CEO Arewa Classic limited; a fashion house that makes all kinds of clothing for both male and female. After his graduation Ibrahim diverted his attention to the Information Technology world where he sees a brighter future. Following his ideology to the e-business world he believes the world will not take years to change with the speedy growth of technology. He believes the future workplace will be

Birth History: was born June 21st 1970 in Kaduna State, Nigeria to the family of Late Prof E.O and Mrs. E.M Adekeye. He is the first of four children. Early Educational History: He had his primary education at the St. Annes Primary school Kakuri Kaduna between 1975 – 1980 and secondary school at the Federal Government College Malali Kaduna from 1981 – 1986. Higher Educational History: He obtained a Diploma in Law (DIL) from the Ahmadu Bello University in 1992 after which he obtained a Bachelor of Science (BSc Hons) degree in Psychology from the University of Jos in 1996. He then proceeded to the University of Ibadan and obtained a Master of Science (MSc) in Clinical Psychology in 2001. He returned to the University of Ibadan again and obtained a Doctor of Philosophy degree (Ph.D) in Clinical Health Psychology. He has also received training in bereavement of sudden loss and countertranceference from the Ife centre for psychological studies. Other training includes cognitive behaviour