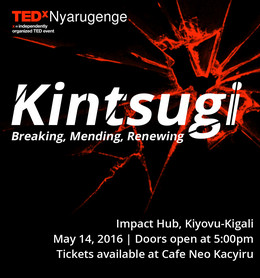 Kintsugi: Breaking, Mending, Renewing is a theme that places emphasis on taking risks and exploring the unknown. Talks will defy the norm and draw together conventionally disparate themes, ideas, or techniques. We hope to encourage radical thinking and embrace the discoveries that come from taking a chance to break the conventional and emerge with something revolutionary.

The word Kintsugi originates from a Japanese art form, which repairs broken pottery with lacquer made out of powdered gold, silver or platinum. Kintsugi represents the act of breaking, mending, and renewing - a symbolism closely aligned with the journey of life. The philosophy around this art is powerful. It is a call to find ways to mend, transform and strengthen what has fallen apart. It reminds us that out of shattered pieces can emerge renewed, startling beauty

Before joining the founding Kepler team in 2013, Carolyn worked as a teacher in New York City Department of Education. She graduated with a BM in Vocal Performance and later joined the New York City Teaching Fellows to earn her masters degree in Education. In 2013, she received the Educator of the Year award from EdNews for her work incorporating technology into her music classroom and her work improving special education outcomes. Outside of Kepler, Carolyn teaches yoga, runs the hills of Kigali and has recently started learning ukulele and tennis.

Eric 1key is a spoken word artist from Rwanda who rhymes in French, English and Kinyarwanda. His music style is a fusion of various genres. He recently performed at the opening of the African Championship of Nations in Kigali, Rwanda, in front of 25,000 people and millions across Africa live. He will be performing with Merphy Kayonga Mpore and Elie Habimana.

Gayatri Datar is the co-founder and CEO of Earth- Enable, a social enterprise that aims to make living conditions healthier for the world’s poor, first by eliminating dirt floors. Prior to founding EarthEn- able, she worked at several international development organizations, including Dalberg Global Development Advisors, the World Bank, the Government of Liberia, and grassroots NGOs in India, Namibia, Nicaragua, Albania, and the United States. She holds a BA in Economics from Harvard College, an MPA/ID from the Harvard Kennedy School, and an MBA from Stanford Graduate School of Business,where she was an Arjay Miller Scholar.

After surviving the Genocide against the Tutsi of 1994 at the age of seven, Hyppolite Ntigurirwa decided to spend the rest of his life working for the service of humanity advocating for peace. Since high school, he has been using Performing Arts (Theatre) as a way to heal himself and to redress normality in his country, Rwanda. His traumatic childhood had the potential to transform him into a resentful and hateful person. Instead, he chose to spread peace and love. His current initiative, Be My Peace, aims to promote the Culture of Peace through educating young Rwandans.

Julian Ingabire Kayibanda is the Founding Director of Child Resource Institute-Rwanda, a non-profit organization committed to ensuring access to high quality, stimulating, developmentally appropriate early childhood care and education. She believes that early intervention promotes healthy growth and development not just for individual children but also for the entire community. She is an award winning social entrepreneur whose experiences span from leading startups that focus on community development, girls’ education and most recently early childhood development. Her passion is about “unleashing other people’s potential.” She is an Acumen Fellow ‘13, holds a bachelor’s degree in Accounting and a post-graduate degree in International Development.

Willy Karekezi is a young Rwandan artist based in Kigali whose mission is to create himself. In his mind, he tries to develop an image of the truth according to an idea which he believes to be universal. He is certain that any expression given to it will persist throughout time.