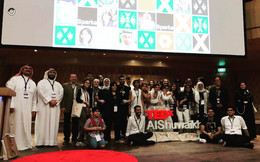 It’s all about ideas!

We invite you to share in the unique experience of TEDxAlShuwaikh in Kuwait, a one day conference with three ingredients...
a crowd + a light + your desire to inspire.

Director of RISE (Center for Research in Informatics, Sciences and Engineering) a Associate Professor of Computer Science at the American University of Kuwait (AUK)

Dr. Amir Zeid has over 70 publications in international conferences and journals. Dr. Zeid’s research interests include: global software engineering, cloud computing, gender issues in computing and adaptive learning methods. He received numerous research funding grants and international awards. Throughout his career, Dr. Zeid dedicated his efforts to unleashing talents of young innovators in the Middle East to create new generations of creative minds. Through coaching student teams over the years, Dr. Zeid managed to help students share their innovations with the world through international competitions like, Microsoft Imagine Cup. He also served as a judge in many prestigious innovation competitions. In 2014, Dr. Zeid was the founding Director of RISE at the American University of Kuwait to be the first science center in the university, and among a few in Kuwait. One of the research lines the center is currently working on is women in computing. He is a member of ACM and IEEE.

Kuwaiti scientist with expertise in advanced technologies including nanotechnology, lasers & photonics, advanced nuclear reactors design, and space technologies. Bassam holds Ph.D in MicroElctroMechanical Systems (MEMS) from Virginia Tech where he contributed to the development of micro gas analysis devices. He has served as scientist in the Nanotechnology program with the Kuwait Institute for Scientific Research, and program coordinator in the Kuwait National Nuclear Energy Committee. In 2012-2013, Bassam was a Fellow of the Kuwait-MIT Center for Natural Resources and the Environment. He has served as a visiting scientist at MIT Chemical Engineering Department, and was a visiting scientist at the Institute for Materials Research, Tohoku University, Japan. He is active in the scientific community and is a reviewer for international scientific journals and continues to serve on national and international technical committees.

Kevin Mathew is science enthusiast, a history nerd and a passionate education activist. He promotes student empowerment here and in India, where he volunteers for a charitable trust which promotes the education for economically disadvantaged children. Kevin is of Indian heritage and moved to Kuwait as a child. At 14, he immersed himself in the Middle East’s rich culture via the Dar al-Athar al-Islamiyyah (DAI), where he volunteered as a docent and a museum intern for the last three years. At 16, he initiated a student-led docent program at Tareq Rajab Museum, Tareq Rajab Docent Program (TRDP) In addition to the growing role it plays in promoting the region’s rich culture to residents and visitors alike, TRDP docents have revitalised the museum and will expand to the Tareq Rajab Museum of Islamic Calligraphy in 2017/2018. Open-minded youths with a solid grasp of culture and history, the docents lead museum tours today, but may be the social, cultural, and political leaders of tomorrow.

Secretary-General of the Supreme Council for Planning and Development in Kuwait and the program director of the Country Action Program of UNDP in Kuwait.

Member in several government boards and higher committees, such as the Public Authority for Industries, and Kuwait Institute for Scientific Researches, Public Housing Authority, the Economic and Fiscal Reform, Silk city and Bobuyan Island and Kuwait MasterPlan besides others. Khaled was an Associate Professor in the College of Engineering and Petroleum at Kuwait University where he taught 29 different courses, received the best teaching award and co-authored more than 65 publications in different fields and co-founded SYNERGY, a complex network . Khaled received his PhD from Northwestern University and his bachelor degree from the University of Toronto both in Chemical Engineering. Khaled is certified consulting engineer CEng, PMP and PRINCE2 as well as a certified GCC arbitrator. He is a member in several local and international organizations. Khaled serves as a technical advisor for Kuwait University and the Minister of Planning and Development Affairs office.

Mr. Mohammed AlSharekh held many governmental positions in Kuwait. - 1969-73: Deputy Director General, The Kuwait Fund for Arab Economic Development. - 1973-75: Executive Director, Internatiaonal Bank for Reconstruction and Develpoment (I.B.R.D.)/World Bank, Washington D.C., USA. - 1975-79: Founding Chairman/Managing Director, The Industrial Bank of Kuwait. From 1980, Mr. AlSharekh devoted his time to build his personal business ventures, and in particular Sakhr Software. Mr. AlSharekh enjoys Classical Music, Arabic Literature, and writes fiction. With his company, he has introduced the Arabic language into computers and technology. In 1982, Al-Sharekh launched Sakhr Software Co. with the mission to adapt computer and communication techniques to meet the unique requirements of the Arabic language. He is the first person to enter Arabic language by computer.

Muthla has shaped the overall vision and strategy, grown TagStone’s customer base, extended its product offerings, and promoted a more open and collaborative corporate culture. Prior to TagStone, Muthla was a Management consultant at Bridgewater Associates, the worlds largest hedge fund. Muthla managed a team that worked with Bridgewater’s executive management, including the CEO, to develop and roll out a suite of proprietary mobile applications designed to systematize the day to day operations of the firm. Muthla’s passions include serving as mentor to young arab entrepreneurs through the Kuwait based technology accelerator program, Sirdab Lab and participating on the advisory board for MS Holdings. She is a mother of two boys and is a keen Bikram yoga student.

Nada Faris is a Kuwaiti writer and performance poet known as “Kuwait’s Finest.” She is an Honorary Fellow in Writing at Iowa University’s International Writing Program (IWP), USA. In 2015, she became a member of the board of trustees for Kuwait’s Cultural Circle Prize for the Arabic Short Story (Almultaqa), the Arab world’s first international award for short story collections in Arabic. She received a MENA Salam fellowship from World Peace Initiative Foundation’s Peace Revolution to meditate with Buddhist monks in Turkey in 2016. Her article “Every Child Deserves a Home: Zeina Al-Sultan Unveils the Truths Behind Adoption in Kuwait” won en.v’s Voice of Success program in 2012. Her fiction, nonfiction and poetry have been published in The Norton Anthology of Hint Fiction, Economic and Political Weekly, Fanack Chronicle of the Middle East & North Africa, The Operating System, Sukoon, The Indianola Review, and more.

Assistant Director of PR &amp; Marketing at the American University of Kuwait (AUK).

She has been working in higher education for 7 years and has a number of peer-reviewed publications in the areas of women in STEM studies, cultural models in education, student coaching approaches, and cross-cultural issues in global software engineering. Rehab is currently a graduate student of Business Psychology at Heriot Watt University in Scotland. Her dissertation examines the Effect of Social and Motivational Factors in Predicting Career Continuance Intentions among Women in STEM careers.

Since 2003 was part of a major recycling company, where I developed my management and technical know how that promoted me from supervisor to management, until I reached a Waste Management Director level within an 11 years span. During this time, we have launched in 2006 a home & office collection campaign. Unfortunately the efforts were shut down back in 2013. As a leader for this collection program, several households urged me to develop a collection program to cater to their needs. Thus @RecycleKuwait program was born by May 2015, and after 2 years, we have exceeded more than 150 houses, and served over 250 houses total.