Theme: Last year it was brilliant so let's do it again 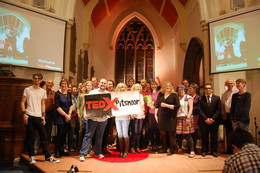 TEDxPitsmoor is about local Pitsmoor people, unused to public speaking, who want to say something that is interesting or entertaining, or both (although an interesting speaker who wants to come and join us from another part of Sheffield would also be welcome). We would really feel like we have succeeded if, in the process, speakers gain new skills and the confidence to speak. We are looking for balanced views that are powerfully made. We also want to make time for tea, lots of cake and local people to meet up. It is about Pitsmoor having a voice.

We have some excellent potential speakers for this year’s event who are starting to plan and rehearse their talks. The brilliant speakers from last year have been helping with the organisation and mentoring speakers.

Martin has secured a pro film crew for the videos, the event is free, and we have no sponsor, just local good will.

David is a community leader who has worked as a multilingual teaching assistant and Roma Placement Officer.

Dr. Panni Poh Yoke Loh is an artist, writer and researcher, born in the U.K. to an English Mother and a Chinese Father. She has worked as a social worker, teacher, researcher and arts coordinator, and exhibited art and spoken at conferences around the world. Sourced from personal experience of being of dual heritage urges us to not only embrace difference but to implement it

Has the misfortune of Martin for a father.

Lee is a successful businessman, entrepreneur and charity worker.

Patrick is a skilled community artist who can create something beautiful out of anything.

Patrick is a skilled playworker, who works at Pitsmoor Adventure Playground.