Theme: Inspire and get Inspired 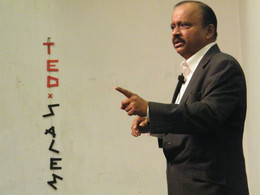 TEDxSalem has the same passion as TED: Spreading Ideas. This event seeks to bring the exciting TED experience to the Steel city of Salem through the speeches of top thinkers and world-changing innovators from the local community. Our mission is to bring powerful ideas to an audience that is every bit as interesting as the speakers.

Madhan is a league by himself in the world of cartooning: he is also well known as a journalist, writer and a film critic. His primary claim to fame was as a cartoonist and his success was his ability to evoke instantaneous laughter. Madhan runs his creative consultancy unit 'Madhan's Sway' which provides guidance and assistance in Journalism, Advertising, Audio/Visual projects to media-related companies.

T Chendil Kumar or CK as he prefers to be called is a corporate trainer and a guest faculty at IIM Bangalore. With over 20 years of experience in sales and marketing and entrepreneurship, CK took a decision to switch over to training and speaking at the age of 45. He doesn't regret it one bit because he now does what he enjoys best - connecting with people and enabling confidence in them. He calls himself "Chief Catalyst" of his organization simply because he doesn't nurse any grand illusions of changing the landscape. He feels he can create an awareness and ignite a spark in his audience by challenging them. CK is an avid Toastmaster and a much sought after speaker. He has sponsored more than 10 Toastmasters Clubs in India.A redeeming feature of CK's talks has been his sprinkling of relevant humor in his talks and programs. He has been conducting workshops on using humor in Public speaking to a wide variety of audiences in India, USA, Sri Lanka, Malaysia, Singapore, Dubai, Bahrain and Saudi Arabia tremendous feedback. He maintains his sanity by dipping regularly into Asterix and PG Wodehouse.

Bret is a geographer from Texas State University-San Marcos whose work focuses on interdisciplinary issues related to international development, refugee interests, gender violence within conflict settings, poverty reduction, and humanitarian assistance while acquiring fundamental skills in quantitative analysis, geographic information systems, and remote sensing. She has presented a professional paper at the 2010 Association of American Geographers National Conference in Washington, D.C., where she was invited to participate in a session on “Geographies of Displacement”. She completed specialized coursework designed to train public and non-profit managers in the technical competencies and ethical values associated with outstanding public service to become a Certified Public Manager through the William P. Hobby Centerfor Public Service. Bret’s academic work initially covered rural development in Alaskan villages and later she incorporated a rural emphasis while completing her studies in Texas by representing the University’s public service program in the Texas Rural Innovators Forum. For more than a decade she worked with faculty and administrators within the university providing her an exceptional opportunity to polish her statistical analysis and research skills. She recently arrived in India to bring an international perspective to her work with rural populations by serving in a volunteer capacity with the Organisation of Development, Action and Maintenance (ODAM) which assists women and their families in Tamil Nadu.

Aarti C Rajaratnam, instrumental in designing innovative classrooms and curriculum models in India and abroad, is a Masters in Clinical Psychology with specialization in Childhood and Adolescent Mental Health from the University of Delhi. Aarti’s mission in life is to redefine education systems all over the world to make Holistic Learning accessible to all children irrespective of cultural boundaries, economic barriers and limiting mindsets. She is a Master Trainer in Neuro Linguistic Programming and is also trained in Transactional Analysis, Dream Analysis and Counselling. Aarti is the Correspondent of Kailash Manasarovar School, Salem and the Director of Academics and Student Welfare Anan Kids Academy, Coimbatore. She also runs Kriti Play school - a preschool, along with her associates in Salem. The focus here is stress free education for children through an eclectic model specially designed to nurture young minds through a thorough analysis of Learning Styles. She has set up schools for children in the rural areas of India to cater to the needs of first generation learners to ensure that their educational and nutritional needs are met. This model of education has increased retention rates and reduced dropout rates, truancy and delinquency among children. She has always cited that working in the villages of India has been her passion, and she has laid a stronger foundation to it by conducting many camps for teachers as well as the students in villages all over the state. Apart from revolutionizing the field of education, Aarti has volunteered to help the victims of Tsunami in 2004. Aarti ‘s charisma and vibrance never fail to ignite the minds that come across her. A true youth icon she is and a great human who inspires us to be humane!

T S Subbaraman holds a doctorate in Physics and was a former Head of the Physics department at Anna University, Chennai. This is one side of him. His specialization may be Physics, but his fervor in his heart is inscribed with Tamil. He always had the passion to write dramas, articles and stories in Tamil. He is also an expert in writing poems in English. Dr. Subbaraman has acted in Tamil plays from the age of nine. He has also performed in various TV and radio dramas. He has the credit of making the science show "Maanudam ventradu" aired in All India Radio for three continuous years into scientific drama. Dr. Subbaraman has authored many books. He has also translated Shakespeare's "Hamlet" into Tamil. Seeing Dr.Subbaraman's passion for Tamil, Anna University appointed him as the first Director of the Centre for Development of Tamil in Engineering and Technology (CDTET) in 2001. He believes that Tamil must be given the status of a classical language and people should works towards developing Tamil in Engineering, Scientific and Technological literature. Through "Kalanjiyam", a quarterly magazine published by CDTET, he wrote several science and technology articles in Tamil. Through CDTET, he also initiated the process of updating Tamil dictionary through the Tamil Virtual University on a regular basis. He strongly believes that scientific Tamil literature can survive on its own without the incorporation of scientific terms from other languages. True to his thoughts, in his book "Oli Nooru" which is about the science of light, he has aesthetically explained Physics concepts through simple and short Tamil poems.

Aparna is the first and only lady artist who holds a Masters degree in both Dance and Music. Introduced to dance at a tender age of 7 under the tutelage of Smt. Savitri and Kalaimamani Dr. Saraswathy, she assimilated the basics of the famous Pandanallur style and the tradition. Her abhinayam exhibits dexterity in depth and refinement in full. She has to her credit more than 500 performances. She is also proficient in classical folk like karagam, kavadi, oyilaattam and poikkaalkudhirai. She is the only artist to have performed Thiruppugazh in the form of dance repertoire. She has also choreographed for Nattrinai, Kurunthogai, Muththollaayiram and many classical poems. She has delivered many lecture demonstrations on Pada and Tiruppugazh at various Sabhas in Chennai. Aparna also has presented a paper on "The Role of Sakthi on Pada". At present, she performs "Thirupugazh" as "Sampradhaaya Bhajana Repertoire" by narrating the meaning of the hymns. She also conducts dance and music classes at VIPANCHEE (Dr. Balamurali Krishna Trust) at Chennai and Salem.

Durga is an architect with the Center for Vernacular Architecture (CVA). She graduated with my Bachelors of Architectural Studies from Carleton University, Ottawa. Following which she worked in Canada, prior to working with CVA, she was working in Bahrain for a couple of years in modern architecture. Later, she had the opportunity to study under Dr. V.Ganapati Sthapati about Temple Architecture and the tenets of Vaastu Shastra. Durga is a specialist in Vernacular Architecture, which is “Architecture that is Artisanal – “Of the Craft”. She says, “Vernacular architecture is an exercise of love. It’s not bound by the strict rules of rationality, industrialization and modernism. It’s fanciful, whimsical and innovative with an inherent structure much like the temples of India. They are as structured as much as they are fruits of loving labour and passionate innovation. The vernacular can never die, as all you have to do is just delve into your past or the collective past of your people to find a treasure trove that’s yours to re-interpret and reconnect with.”

N.V.Sankaran, known widely as O Pakkangal Gnani, is a writer, journalist, theatre person and a film maker. Founder and Executive editor of 'chutti vikatan' tamil monthly magazine for children, he worked as journalist with Junior Vikatan, Ananda vikatan, Dheemtharikida, Vinn Nayakan for several years. He has to his credit a detailed coverage of Kargil war for vikatan group. He was the Correspondent for Ananda Vikatan and now a columnist for Kumudam. He has published books like "Pazaiya paper" (old paper), "Marupadiyum" (again), a collection of articles on current affairs, "Baloon" (play), Ayya ( filmscript of five part serial on life of Periyar E.V.R.), and many more. His articles such as "Arindhum ariyaamalum" (on life education for adolescents and parents), "oh pakangal" (five volumes), "en vaazhkkai en kaiyil" (on life skills) are very famous. His is also a founder member of Koothu-p-pattarai, a group formed to revive traditional tamil theatre form of kooth and to evolve a modern idiom of theatre from these roots and also has directed many plays, scripted and directed several tamil television serials.

Kalieaswari, a Psychology graduate, extends the science of understanding people through the art of theatre. As a theatre performer, having been a voice actor with the AIR - Rainbow FM, she believes theatre does have an impact in the society, touching and transforming lives positively. She is an actor, director ,writer and trainer in theatre. Her associations include, Theatre Y- a professional theatre group and her first home. Through Theatre Y, Kalieshwari is involved in reaching out to people through the medium of theatre . She is also actively involved with NalandaWay- an NGO working with marginalised children and empowering them with life skills, through arts, music and theatre. Kalieaswari, previously, had been in the corporate Sector, working with organizations including Dell, and Citibank. A dreamer with a lifelong quest, found the raison d'etre of her existence (in its truest sense), in theatre. Then on, it has been theatre all the way. Now, the mission is, " yaam petra inbam peruga ivvaiyagam". Hence the journey, to make theatre accessible and applicable to all walks of people, in different phases of life. To sum her up in her own words," naan oru kattiyangaaran."

"In the midst of our fast-paced lifestyle, people read the quotes and the thoughts that I write on the street walls of Salem as they wait at the 'red' traffic signal, and feel that my quotes inspire them and give a 'green' signal in their paths of life. This makes me feel extremely happy and proud". The proud owner of the above lines is MMM Corner Pasupathy, who is a graffiti artist. Innovation was in his blood.18 years back he started painting the names of the movies on the walls as images instead of letters. For example, while painting the advertisement for the Tamil movie "Poova? Thalaiya?", he drew the picture of a flower and a head each followed by a question mark, to depict the name. Later, he started to paint motivational thoughts on the street walls of Salem every week. This great work has touched and changed the lives of many. People then started to stop in front of the walls in anticipation, to read the quote which he would write for that week. Though known for his work, he remains unknown to the public. 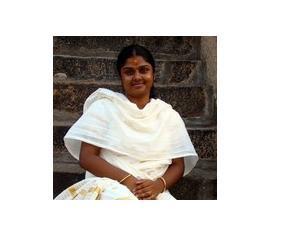 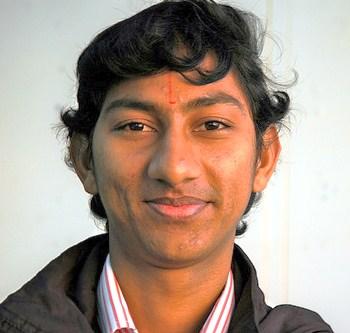