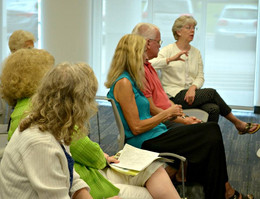 Our theme for the evening is education. Join us for a screening of 3 recorded TED talks with a group discussion to follow afterwards. Refreshments will be served.

All the talks we watched mentioned the idea of inspiring students to take risks (rather than being so afraid to fail they wouldn’t try). Someone mentioned being a dance instructor, and how children ages 3-5 are brimming with creativity, but after that it becomes more difficult to get them to experiment because of their fear of failure. Someone else noted that as a society, we often feel pressure to conform to the majority for fear of being penalized for being different, and this can hamper our desire to try new things and possibly stand out.

One person likened Sir Ken Robinson’s talk on inspiring students to be creative to teaching the entrepreneurial spirit. Unfortunately, school systems often receive funding for “teaching to the test”, so the change would have to start from the top down of the education system. A mother mentioned one thing she has done to inspire creativity in her children is to never tell them “because I said so” as a response, and that we should encourage young people to ask why and inquire about things that interest them. Another participant said Winston Churchill’s advice to pursue at least a couple of hobbies could also help spark imagination and creativity among students.

One teach in the audience mentioned using Salman Khan’s video lessons as supplements in their classrooms. Another mentioned that the teachers at their school flipped some classrooms by creating their own lecture videos versus using the Khan Academy ones. One audience member noted that the flipped classroom assumes students having reliable access to the internet and an environment where they can focus on the material. By attempting to flip classrooms, we may put already at-risk students at more of a disadvantage.

Rita F. Pierson’s message of building a culture of feeling respected and loved was well-received by the audience. A teacher wholeheartedly agreed with Pierson’s advice to create a classroom of mutual respect because you want students to be on your team.

- Further writing by Sir Ken Robinson available through the library
- Further writing by Salman Khan available through the library
- From the TED Blog: "Remembering Educator Rita F. Pierson"
- Sakena Yacoobi, "How I Stopped the Taliban from Shutting Down My School"
- Linda Cliatt-Wayman, "How to Fix a Broken School? Lead Fearlessly, Love Hard"
- Angela Lee Duckworth, "The Key to Success? Grit"