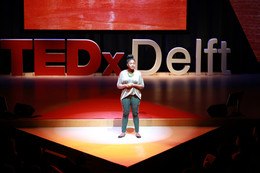 This edition is TEDxDelft’s 5th anniversary and was held on the birthday of one of history’s biggest thinkers: Leonardo da Vinci. Come join us on April 15th to celebrate the universal genius and share some more brilliant ideas!

Speaking of universal, the variety of the talks most certainly is: from storytelling to healthcare, and from confidence to the creative industry. For more information on the speakers visit the speakers section on the TEDxDelft home page. And then there are of course the many side events.

Marcel Harteveld (1984) and Johan Fretz (1985) form the duo Harteveld & Fretz. In 2010 they traveled to 25 countries in 35 days, for a TV show. In their performance Harteveld & Fretz share a small travelogue. They make theater and music ; Johan is the storyteller, Marcel is the troubadour. The Dutch audience might know them from the fictional bid for the position of prime minister in 2025. Currently they are working with producer David Middelhoff on their debut album, released late in 2016. .

Since 2014, Amsterdam Funk Orchestra have given big band music a new dimension through their funky music with a formal outlook.

Seoane studied chemical engineering at the University of Zaragoza, where she graduated in 2009. That same year she embarked upon a PhD on the development of new strategies for MOF synthesis, and their application as filler in polymeric membranes for gas separation. MOFs are metal oxides and metal-organic frameworks: metal ions that together with organic molecules form a three-dimensional structure. After receiving her PhD degree cum laude in 2014, she moved to The Netherlands to work as a postdoc in the Catalysis Engineering group at TU Delft. In 2015 she was granted a Veni personal grant. Since January 2016 she has been working at Utrecht University.

Van der Ham was born in Amsterdam, where he would later study history. He switched to the Maastricht Academy of Dramatic Arts, after which he worked as an actor at various theatre groups. But the appeal of politics was stronger, after being the president of the youth section of D66, a Dutch liberal democrat party. He worked as a parliamentary assistant for both the European and Dutch parliament and was elected several times as a a full-fledged member of Dutch parliament, where he stayed for ten years. At present, Van der Ham is a writer and is chairing various organisations, such as the Dutch Humanist Association. Last year he made the documentary ‘Among non-believers’.

To Daan Verlaan, songs are a mix of singing, playing and composing. The best ones are those that make the connections between these layers of expression. Daan demonstrates this by playing some pieces on stage, linking medieval music to contemporary jazz.

Van Fenema initially set out studying violin at a conservatory in Amsterdam. After four years she went on to study medicine. Having attained her degree she worked for a year as a doctor in first aid, before starting her education to become a psychiatrist at Leiden University Medical Center. “It is the best profession there is,” she says.

Van Kuijk studied Industrial Design Engineering, he obtained a PhD in the same field, and continues to work at TU Delft as an Assistant Professor. During his studies he followed a course in theatrics and comedy. From this course came a group with which van Kuijk toured for three years, and went on to win a contest at a comedy festival. After three years of touring the group was dissolved, and Van Kuijk decided he wanted to become a solo artist.

The emergence of minimally invasive surgery, also known as keyhole surgery, marked a revolution in the operating theater. Dankelman, Professor of Minimally Invasive Surgery and Intervention Techniques at TU Delft, was at the forefront of it. She has been designing novel medical instruments since the 1990s, including training and simulation systems to teach doctors how to use these, and systems to optimize patient safety in operating theaters. With such a background, it is not surprising that Dankelman’s favorite TED talk is on a medical subject. It is by Dr. Jill Taylor, a neuroanatomist, who describes her personal experience of a left hemisphere stroke.

How can it be that sex is such a commonly practised activity, yet it is still kind of taboo to talk about it in depth?

Everyone at some point in their life has likely given a presentation, more often than not with a few all too familiar pointers such as to smile, or to avoid saying “um”. Karin de Groot, a presentation coach and radio presenter, says there is only one piece of advice people need: stop presenting and start talking.

Kevin 'Blaxtar' de Randamie is a hip-hop artist and an entrepreneur, and has set up several creative platforms. Through his struggles to make ends meet, he learned valuable lessons about what it takes to be an artist who can support him or herself financially. Lessons he is eager to share.

Eight years ago, Kiza arrived in the Netherlands, fleeing from the civil war in Congo. With the support of the local community, he managed to evolve into the best version of himself. At present he studies at university level, and writes opinion pieces on Africa, politics and migration. In addition, he has written for various publications on Africa and politics and migration. “I am an opinion maker,” he said. His involvement with the various organizations has given him a very clear perspective on the integration of migrants in Dutch society and ideas on how he feels it could further improve.

Van Duijn studied at Leiden University, where he obtained a Bachelor’s degree in Dutch Language and Literature, in addition to following a minor in Business Administration. He followed this up with a Master’s in Literature/Linguistics. Having attained his MA, he embarked on a multitude of projects. He became a PhD fellow at Leiden University, and worked at the University of Oxford as a Visiting Researcher where he was affiliated with the Social and Evolutionary Neuroscience Research Group, headed by Professor Robin Dunbar (known for formulating Dunbar’s number, which says that people have a cognitive limit to the number of stable relations a person can maintain). Since 2015 Van Duijn has been working as an Assistant Professor at Leiden University.

Niels is a journalist and fiction writer. Throughout his career, he has written three novels and several short stories. Passionate about technology, Niels is also involved in the creation of worlds for video games. Now, he is worried about the novel and shares his opinion on its future.

Rowland Manthorpe is an award-winning writer and journalist who has written for publications from the Guardian to the Atlantic. He is currently an editor at Wired magazine. Confidence is a concept that has fascinated for years. Rowland came to his own conclusion, one which he is anxious to share

Breedveld was born and raised in the port city of Rotterdam, where from an early age he realised that both health care and science were two topics that very much interested him. And so he enrolled at the Delft University of Technology, where he studied mathematics and eventually obtained a Master’s degree. At the same time, he continued to find ways to connect with the health care sector. “I was always looking for the intersection between mathematics and medicine,” he explains. After graduating he became a student at Erasmus MC, where he would eventually achieve a Doctorate in Medical Physics.

Tim Houter is team leader of the Delft Hyperloop project, which competes in the Hyperloop competition. Tim is a Mechanical Engineering student at TU Delft. Before joining the Hyperloop team, he worked for two years on the Formula Student Team of the university.

Toon Lobach is a jumpy dancer with unexpected twists and turns and a great lithe body, which all is in contrast with the heavy industrial music he prefers.

Hupe was born 17 years ago, and is currently in his final year of VWO, pre-university level, at high school. Outside of school his main interest is playing soccer, with friends as well as at a local club. He also likes to travel, draw and play board and card games. After graduation it is Hupe’s intention to enroll at TU Delft, where he plans to study industrial engineering. The opportunity he had to continue practising science as an extracurricular activity at his high school was the main reason for this decision. “At the end of the third year I had to choose the courses for my final years,” he explained. “A few teachers would get together every once in a while to build things, but often didn’t actually get around to getting together.” An initiative started where the teachers asked several students who might be interested in joining the group to work on a project of their own, amongst which was Hupe. 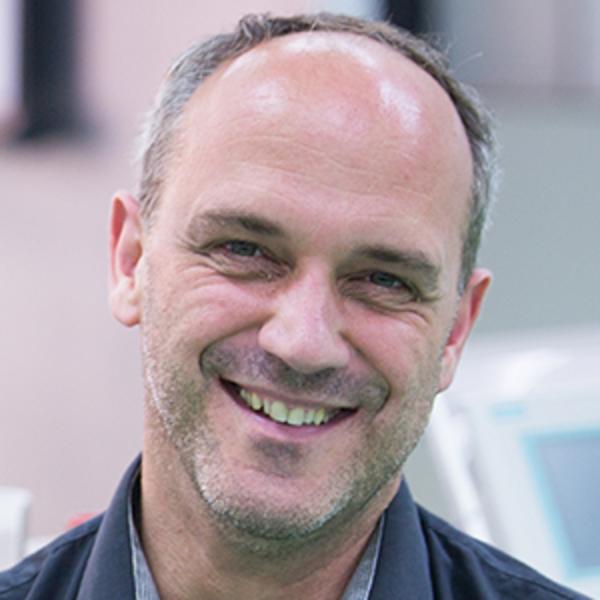 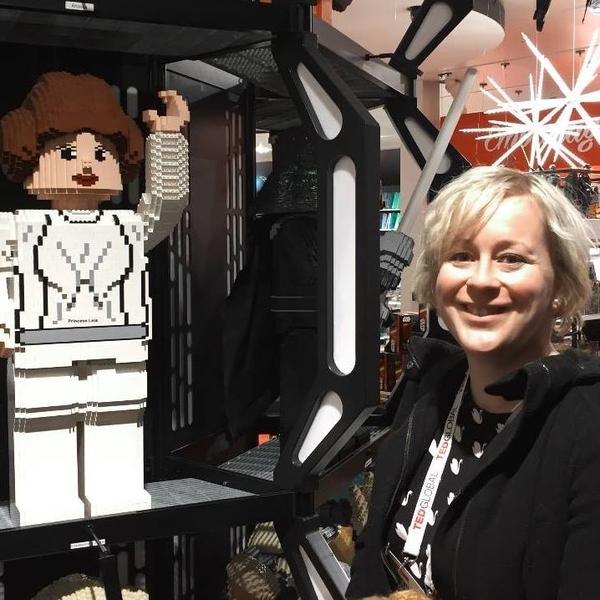