"Everything changes when you start to emit your own frequency rather than absorbing the frequencies around you. When you start imprinting your intent on the universe rather than receiving an imprint on existence...

Leave an imprint on this world."

Fahd was born in 1982 in Iasi, Romania, from a pharmacist Greek mom and a dentist Lebanese dad. Up to his 17 he was raised in Greece, till leaving for LAU University (Lebanese American University) in Beirut to study Marketing. Whereas his parents were into the restaurant business, Fahd was completing his military service, when decided to work in Dubai. So for four years in a row, he worked in advertising and marketing. He returned to Greece and after an additional four-year tour at various job positions, such as yacht broker, telecommunications, multinationals, brokerage, he thought that enough is enough and engaged to what he really loved…. cooking!

Georgia Kakourou Chroni hold the position of the official curator at the Koumantaros Gallery, National Gallery Annex,Sparta till 2015. She studied and completed her doctoral thesis at the NKUA Filosophy dept. Her postgraduate studies at the University of Leicester were concentrated on the field of museology, leading her steps at the History of Art dept. University of Cambridge. Her career is based on art teaching techniques for elementary school, a domain she involved with at the University of Missouri Columbia. Mrs.Chroni has taught at the University of Peloponnese and the Hellenic Open University dept."Postgraduate Department of Cultural Management" and was a member of the Fulbright Foundation. Her scientific interest focuses on modern Greek literature and museology. She has also published various papers in international magazines, as well as a number of books.

Giannis Gerontidis was born in Kastoreio, Laconia in 1975 a village near Sparta, Taygetos. He grew up in Sparta, where he finished high school. Before having the chance to join University he had to take hold of a trout farm and a food store, a family enterprise of two generations, something of course that would have done anyway. A restless mind by nature, he never lulled himself from the knowledge he could gain and was determined to maximize the unit's capabilities. So he began to read scientific books, attend to various seminars concerning management, marketing, merchandising and financial accounting, organization and business fields, offering to the market one of the first Greek "gourmet" products, award-winning, patented and unique.

Jimmy Athanasopoulos, is the Head of Social Responsibility for the Libra Group and provides strategic oversight of the group’s global responsibility and education programmes. He is also Chairman of the Hellenic Entrepreneurship Award. Following an MBA from Northeastern Illinois University, Jimmy began his career in Chicago as a provider of financial and investment services across various asset classes. He undertook a variety of management roles at multinational corporations including DNV, Tyco Healthcare, and TetraPak before entering ship management as Chief Accounting Officer / Controller with FreeSeas Inc. He later joined G. Bros Maritime S.A. where held various senior positions including responsibility for financial reporting to the Board of Directors. Jimmy Athanasopoulos joined the Libra Group in 2012 as Director of the Hellenic Entrepreneurship Award, responsible for its launch and development, as well as management of the application and shortlisting process.

Born in New York in 1983. He completed his PhD studies at the University of Aegean on Sea Sciences, gaining a specialization in ecology of the fish fauna of the Evrotas river. Since 2005 he has been collaborating with the Greek Centre for Marine Research and has also participated in European research projects all over the country.

Born in Piraeus in 1936, he draws his ultimate origin from Eastern Romilia and Hydra. He studied at Panteion University and continued his postgraduate studies in English Language and Literature at the UK. His career was connected to his Professor and Translator profession though his athletic inclination began to overtake him in 1951 engaging his steps in middle-distance roads and strength stamina feats. He is officially and internationally established as a Marathon and Ultra Marathon runner. They globally refer to him as "Master of Sport". Founder of the Greek Association of Road UltraRacing, a sport that was unknown in Greece 1992, he then decided to revive the legendary Pheidippides feat (490 b.C. “Battle of Marathon” History has it as the Athens - Sparta - Athens path) about 500 km and thus declared as the world's first reviver of the Pheidippides feat.

Stathis Stasinopoulos was born in 1976 in Athens. Before he had even completed his studies at the School of Mechanics Technology Department, Educational Institute of Halkida he had already traveled several thousand kilometers by bicycle. After a long work "Voyage" in multinational and non-multinational companies, he decided that fate had him tied up on his two wheels passion. In 2013 he founded Velo Lab (Velocipede Laboratory), a bicycle construction workshop, a startup which aims to the commercial presence of a 100% Greek bicycle for the International market. So his life was literally turned into a bicycle...as well placed by a Greek saying...

Born in Athens in 1983. He has been working on theater as an actor and director. For the past six years, he has formed part of the Theatre of the Deaf's of Greece, where he has been directing shows, collaborating with both deaf and speaking actors. Simultaneously, his studies as a social worker have not ceased action, since he is still teaching theatrical play to children with autism, mental and learning difficulties. 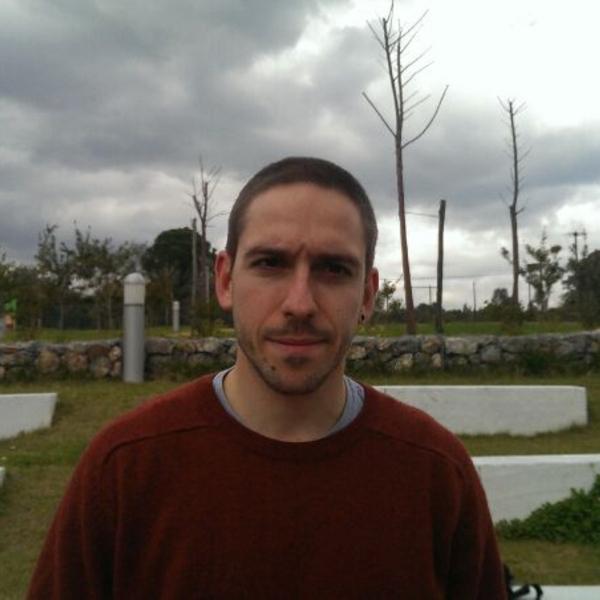