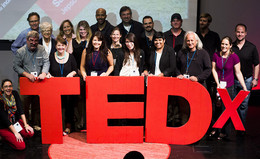 We're all sold out for this year's event! You can still be a part of it via live stream: livestream.com/tedx/creativecoast

TEDx was created in the spirit of TED's mission,"ideas worth spreading." The program is designed to give communities, organizations and individuals the opportunity to stimulate dialogue through TED-like experiences at the local level. More information further down.

We had an amazing number of speaker applications and after many hours of discussions we have finalized our list.

TED is a nonprofit organization devoted to Ideas Worth Spreading. Started as a four-day conference in California 25 years ago, TED has grown to support those world-changing ideas with multiple initiatives. The annual TED Conference invites the world’s leading thinkers and doers to speak for 18 minutes. Their talks are then made available, free, at TED.com.

The TEDx initiative grants free licenses to people around the world to organize TED-style events in their communities with TED Talks and live speakers. More than 5,000 TEDx events have been held, and selected talks from these events also appear on TED.com. In the spirit of ideas worth spreading, TEDx is a program of local, self-organized events that brings people together to share a TED-like experience. At a TEDx event, TEDTalk videos and live speakers combine to spark deep discussion and connection in a small group. These local, self-organized events are branded TEDx, where x = independently organized TED event. The TED Conference provides general guidance for the TEDx program, but individual TEDx events are self-organized. (Subject to certain rules and regulations, including non profit generating.)

Each ticket holder will be entitled to:

Coffee & Breakfast, A full day of TEDxCreativeCoast Sessions, Full Sit-down Lunch, and Post TEDxCreativeCoast Reception. Tickets can be purchased until two weeks before the event (or until they sell out which usually happens first).

No refunds… sorry! Please gift your ticket to a co-worker or friend.
(See our Substitution policy for details)

Tickets are transferable without a fee by sending an email to tedxcreativecoast@thecreativecoast.org 2 weeks BEFORE the event with subject: Ticket Transfer. Attendees must have a badge with their name on it. Badges will be checked throughout the day.

YOU MIGHT BE PHOTOGRAPHED, VIDEOTAPED AND/or BROADCAST ON OUR WEBSITES WITH NO COMPENSATION. By attending TEDxCreativeCoast, you waive any injury or talent claims whatsoever and accept these terms and conditions. Specifically, you claim no copyright interest in your image if used as part of any websites, any video images, or any promotional materials for TEDxCreativeCoast, The Creative Coast, LLC or others. By purchasing a badge, you hereby RELEASE ALL BROADCAST & TALENT RIGHTS.
207 West York Street
Savannah, Georgia, 31401
United States
See more ­T­E­Dx­Creative­Coast events

Carl Scott is a 2013 Behavior Analysis Graduate from Savannah State University. Carl has a passion for working with at risk youth and teaching them the importance of making critical decisions to enhance their futures. Carl spends majority of his time exposing young males to positive endeavors so that they can strive for greater things outside of their communities. In the Bronx Carl faced many different challenges growing up in a poverty-infested area. Those challenges instilled a desire in him to want to help others. Carl remains very optimistic that one day the world will be a peaceful and cohesive place.

Mrs. Hayes is a graduate of the University of Chicago Law School. She worked as a clerk for Judge B. A. Edenfield, as an associate at the law firm of King & Spalding and as a lawyer at The Coca-Cola Company. There she handled more than a billion dollars worth of acquisitions. She retired as Associate General Counsel and Secretary to the Board of Directors. She holds an M.S. in Professional Counseling from Georgia State University and helps clients overcome trauma, grief, depression or anxiety. She practices in Savannah. Mrs. Hayes is a widow and mother of two children, one living. She lives in Bluffton with her daughter and twin granddaughters.

Celeste Headlee has worked in public radio since 1999, as a reporter, host, and correspondent. She was the Midwest Correspondent for NPR before becoming the co-host of the PRI show The Takeaway. She also guest hosted a number of NPR shows including Tell Me More, Talk of the Nation, Weekend All Things Considered, and Weekend Edition. Celeste holds multiple degrees in music and still performs as a professional opera singer. She's the granddaughter of composer William Grant Still, the Dean of African American Composers. Celeste is an avid hiker, biker, paddler and dog walker.

David Kyler is the executive director of the Center for a Sustainable Coast, a non-profit membership organization he co-founded in 1997. The Center advocates responsible decisions that sustain coastal Georgia’s quality of life and environment. David has authored numerous articles, reports, and opinion commentaries on issues related to coastal Georgia’s development, economy, and environment. He holds degrees in Industrial Engineering and MS, Design Science, and has completed advanced studies in Resource Management and Policy.

Denise Grabowski, AICP, LEEDAP, is an urban planner, sustainability advocate, native Georgian, and mother of two. She founded her firm, Symbioscity, as a reflection of her interests in the relationships between the built and natural environments. Denise serves on the U.S. Green Building Council (USGBC) Board of Directors and is a co-founder of Designing4Health, a collaborative working to increase the understanding between public health and community design. She has a B.S. in Environmental Science from Furman University and a Master of City Planning from Georgia Tech. In 2009, she was named to Georgia Trend’s “Top 40 Under 40" list.

Giselle Rahn is a professor and practicing designer. Her intrinsic love for communities grew out of work in anthropology, historic preservation, public policy and bicycling. So far, she has moved thirteen times in nine different states. Frequent relocation has informed her approach to research, design and belief in the value of a sense of place. Since October, she has been rehabilitating a previously vacant historic home near the Starland District. She currently teaches at SCAD and works for California based LEVEL Studios. She holds a Design Management MFA from SCAD and a anthropology/sociology BA from St. Mary’s College of Maryland.

Howard Paul strikes an exhausting balance between performances, lectures, recordings, and running the day-to-day business as President/CEO of internationally renowned Benedetto Guitars, located in Savannah, GA since 2006. He’s performed extensively with guitar legends including Bucky Pizzarelli and Howard Alden and small groups with Grammy winners Tom Scott, Mark Egan, Bob James, and with Tony Monaco, Don Braden, and many others. He’s a 2011 inductee of the Coastal Jazz Hall of Fame. His most recent CD releases is Tony Monaco & Howard Paul - New Adventures 2014. He is married to attorney/clarinetist Patty Paul and has a 17-year old son, Andy.

Jeremy Jon Kaiser was born and raised in Wyoming. He earned a bachelor in studio art from the University of West Florida in 2008 and then joined the military. He was deployed to Iraq with 2nd brigade and returned in 2010. In 2012 he served a year in South Korea before returning to the States. He is currently stationed at Fort Stewart. His hobbies include art, reading, video games, and moving heavy things. He loves doing volunteer work with animals and seeing how many seasons of a show he can watch in a weekend. His goals are to retire from the military, get married, and try to change the world.

John Carlyle trained in NYC at the Harkness School of Ballet on a full scholarship. He has danced professionally with City Center Dance Theatre, Tampa Ballet, and Savannah Ballet. John has been a Principal Guest Artist with Lexington Ballet and Columbia City Ballet. He and his wife, Karena Brock-Carlyle, are the Co-Artistic Directors for the Hilton Head Dance Theatre and the owners of the Hilton Head Dance School.

Katheriin is a part of team Geekend, and helps craft programs and events for entrepreneurs. Before landing in Savannah for a year-long internship program with CIEE. she worked and studied in England, Poland, Singapore, Indonesia and Estonia. A social anthropologist by training, Katheriin has a keen interest in community empowerment and entrepreneurship. When not cheering on entrepreneurs, she likes to plot the eventual execution of one of her own business ideas. Besides her entrepreneurialism, Katheriin prides herself on her relentless curiosity, willingness to learn and relearn, unyielding kindness and on diving in headfirst.

Katie Maurer is currently a sophomore at the Hilton Head Island High School. She began her dance training at the age of 3 and her passion for ballet became her main focus at the age of 13. She has grown through the ranks of the Hilton Head Dance Theatre becoming a member of the Company and having multiple opportunities to perform throughout the community as well as dancing roles such as the “Snow Queen” in this year’s production of The Nutcracker. Karena Brock-Carlyle and John Carlyle continue to be her main source of inspiration.

For 24 years Dan was an award-winning journalist and editor for newspapers nationwide. In 2002, at the age of 39, Dan was diagnosed with Parkinson’s disease. This spurred him to step away from his media career to study neuroscience. The more he learned, the more applications he saw for leaders and organizations. In 2005 Dan became the President of the Rapid Change Group, a 20-year-old neuroscience-based employee engagement firm. Company clients included the leaders of Fortune 500 companies. In 2013, Rapid Change was bought by WorkplaceDynamics, the country’s leading employee survey company, to bolster a joint mission: to make the world a better place to work together.

Nigel Law is an Englishman by birth, a sea kayak guide and small business owner by profession, and has, for twenty years, been a vipassana meditator by design. He has traveled the five points of the earth: North, South, East, West, and Self. After having walked, biked, sailed, and paddled his way through his adult years, he is glad to have chosen the slow route. At human speed, he can hear himself breathe.

A nationally touring performing artist, instructor, and speaker, Paul Miller's boundless energy and improvisational comedy engages audiences of all ages. In 1999, he founded Flow Circus with a mission to promote active learning and play through the juggling arts. Flow Circus has partnered with hundreds of educational organizations to conduct skill based programs that encourage self-directed learning, build resiliency, and foster a growth mindset. In 2014, Paul co-founded Skoyz Wellness with this same model of experiential learning to create productive individuals, strong teams, and a culture of innovation for companies.

Roger Moss has a degree in interpersonal communications from Wheaton College, Wheaton Illinois. He is the co-founder of the Savannah Children’s Choir and Savannah Classical Academy, a public charter school in Savannah. His “get it done “ attitude has served organizations ranging from the Savannah Downtown Business Association to the Savannah Downtown Neighborhood Association. The David Kennedy crime prevention program Savannah has contracted was introduced by Roger. His next project is getting fiber into Savannah.