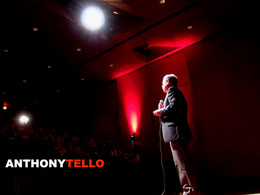 TEDxBismarck is based on stepping outside of your comfort zone and granting yourself permission to take action. Thus, our event is themed on the word, "Permission" [per-mish-uhn] authorization granted to do something. It is an inspirational, social-networking day filled with great speakers, networking activities, and musical entertainment.

At just 11 years old, Bridger Anderson wants to show the world that you’re never too young (or old) to be charitable and make a difference. Since the age of 7, Bridger has been focused on helping others around the world gain access to clean water. He came home from school one day with the idea of saving his allowance and sending his first $100 to help people in Africa. That week, he launched his very first clean water campaign through charity: water. In the past 5 years, Bridger has raised over $38,000 for water projects in Ethiopia and Rwanda through his yearly Clean Water for Christmas campaign, where he gives up Christmas gifts in hopes of encouraging and inspiring others to give money that will bring the gift of water to communities in need. Bridger attends Horizon Middle School in Bismarck, ND and enjoys playing soccer and football, writing, drawing, choir, and learning to play the piano and guitar.

Dr. Debora Hansen Dragseth is a professor of business and the Director of the Theodore Roosevelt Honors Leadership Program at Dickinson State University. Dragseth has won national awards for her writing from the National Federation of Press Women. She develops leadership curriculum for Fortune 100 companies and has been a recent contributor to New Geography, India Times, CNN.com and MSN.com. Her work has been cited in both Forbes and Newsweek magazines.

Gwyn Ridenhour is an educational advocate, children’s librarian, and founder and writer of the popular education blog STEAM-Powered Classroom. Since 2009, she has combined elements of public school, home education, online learning, and private mentorship to create a student-led, hybrid education for her two children. As a result, her 11-year old daughter is now a six-time self-published author and has presented to hundreds of kids throughout the state and across the world; her musical son just graduated from high school at 14 with a professionally produced album and plans to fully pursue a music career. Gwyn works now with home and public educators alike, advocating for out-of-the-box, student-led, cross-curricular learning for all kids. Her website is: www.steampoweredclassroom.com

Ian Ridenhour is a fifteen-year-old drummer/keyboardist, singer/composer. Since joining the African drumming group Djoliba Jr. at age four, Ian has expanded his musical accomplishments to include rock, funk, jazz, classical, and choral music. A multiple award-winning performer, Ian played in a number of bands on the Bismarck music scene, including Blind Mice, Hex Radio, and Tigirlily, and he regularly performs as a solo artist and bandleader. Ian was nominated in three categories at the 2015 North Dakota Music Awards--Best Percussionist, Best Keyboardist, and Best High School Band.

Jim enjoys sharing the healing power of yoga and meditation as a yoga teacher and filmmaker. He has spent much of the past 20 years traveling the world, learning languages and studying under gurus from India and Europe to Brazil. He earned his Masters in Film Theory at UND and studied cinematography at the Polish National Film School. Jim and his wife, Angie, have produced three yoga DVDs, including "Mysore Magic: Yoga at the Source," which is being distributed in over 60 countries. Their website is upwardspiralfilms.com

Scott Samuelson studied philosophy at Grinnell College (BA, 1995, valedictorian) and Emory University (PhD, 2001). Since 2000 he has taught at Kirkwood Community College in Iowa. Inspired by his students, he wrote his first book The Deepest Human Life: An Introduction to Philosophy for Everyone (University of Chicago Press, 2014). He also writes movie reviews for Little Village and hosts Ethical Perspectives on the News, a Sunday-morning talk show on KCRG, the local ABC affiliate. For a decade he moonlighted as an occasional sous-chef at Simone’s Plain and Simple, a French restaurant on a gravel road. He’s published articles in the Wall Street Journal, the Huffington Post, the Chronicle of Higher Education, The Philosopher’s Magazine, and The Atlantic. On top of his job at Kirkwood, he teaches philosophy at Oakdale Prison. He’s currently working on his second book, Seven Ways of Looking at Pointless Suffering.