The theme was Ideas on the Edge of...
The schedule...
0830: Sign In
0900: Welcome by Dr. David W. Powers and TEDx Introduction Video
0910: Brian Carter- Poets, Actors and Comedians: The Edge of Social Media Marketing
Synopsis- In social media you have to do three things: grab attention, create rapport, and inspire desire. These three things require contrary talents. Can one person do them all?
Bio- Called the "Jim Carrey of Social Media Pundits"; Brian Carter is Director of Social Media, SEO, and PPC for the Internet marketing agency, Fuel Interactive. He was quoted in Twitter Marketing for Dummies and has been interviewed and profiled by Information Week, US News & World Report, and Entrepreneur Magazine. Brian is one of the most popular writers for the search/social industry blogs Search Engine Journal (ranked #5 by Ad Age), Search Engine People, and SEO Scoop. A speaker and trainer for top conferences and organizations including SMX, Pubcon, and The American Marketing Association, Brian is one of the nation's leading experts in Social Media Strategy & Internet Business Optimization.
www.briancarteryeah.com
0930: TED Talk- Daniel Pink on the surprising science of motivation
0950: Jordan McDonald- Women in Mixed Martial Arts
Synopsis- Is it acceptable for women to step into a cage and fight? Is it okay for us to enjoy watching it?
Bio- Jordan McDonald began training under Maurice Travis, a three‐time World Muay Thai Champion. Her focus is in Muay Thai kickboxing and Jiu Jitsu. Jordan has caught the attention of prominent pro MMA fighters and coaches Dan Henderson and Randy Couture who have both expressed interest in training with Jordan as her MMA career progresses. Her other passions include being a competitive surfer and model. Jordan held the #1 spot in the Eastern Surfing Association Northern South Carolina region in 2002-03, and has remained in the top 3 in the following years. Jordan has been featured on the cover of Surge Magazine and the centerfold in Surf Carolina Magazine.
http://mmajordan.com
1010: TED Talk- Clifford Stoll on…Everything
1030: Speaker 3- Jeff Small- Technology Ubiquity: A Brief History of the Future
Synopsis- What happens when “space age technology” becomes a part of our everyday lives? What are the effects of making millions of dollars in hardware and software available to anyone at anytime? How does it affect our lives, and what will the ramifications be for future generations? Also, just how fast is all this happening? Join me for an inspirational look back at “the future” as we explore technology and everyday living.
Bio- (in Jeff’s own words) I’m Jeff. I’m Interactive Development Director at LHWH Advertising and Public Relations. I’ve been doing this stuff for about 25 years or so. A lot of people don’t like what they do. They don’t like their jobs, they hate the work their tasked with every day. I’m the opposite. I love what I do. I love programming, I love code, and I love sitting in front of a computer completely losing track of time, looking up later to discover you’ve actually made something. Something that does something, or accomplishes something. Something that’s cool.
www.rocketshiptoplanetjeff.com
1050: Speaker 4- Campbell Thames- Interstates, Toothless Rednecks, and Cultural WMDs
Synopsis- This is an exploration of our shrinking world, culturecide, CSTDs, and the redemption of conversation.
Bio- Campbell Thames is the Pastor of Live Oak Church in Murrells Inlet. Aside from his seminary studies in theological matters, he is well-known as an expert resource in matters pertaining to pop culture, including music, television, cinema, and literature.
www.liveoakchurch.com
1110: TED Talk- Elizabeth Gilbert on nurturing creativity
1130: Speaker 4- Gina Trimarco- The Power of Yes
Synopsis- Improv has the power to change your life. Find out how by experiencing the Power of Yes.
Bio- Gina is the founder of Carolina Improv Company and oversees all aspects of the company, including teaching all individual adult classes, facilitating corporate training programs and directing/producing improv shows. Originally from Chicago, Gina earned her Bachelor of Arts in Communications from DePaul University. While in college she studied improvisational theatre at Chicago’s famed Second City Conservatory and Player’s Workshop of the Second City. She has also studied with Zach Ward, owner and producer of DSI Comedy Theater in North Carolina. When she discovered that improv entertainment and classes didn’t exist in Myrtle Beach she decided to start teaching improv herself.
www.carolinaimprov.com
1150: Closing Words and TEDx Feedback Survey with Dr. David W. Powers

The Master of the Art of Living 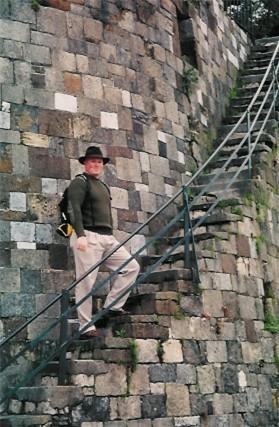