Theme: Fantastic Reality - How We Shape Our Future 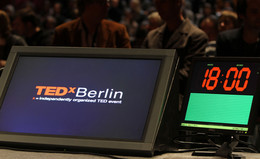 The shape of the future is about the shape of the present. It’s about ideas put into action, about thoughts that can set change into motion. And this is the theme of the TEDx Conference in Berlin.
The presentations at the conference are ideas that are worth spreading because they are just the type of innovative thinking that is poised to influence change.

Simon Berry is the founder of Cola Life, which is a charity that aims to use Coca Cola’s distribution channels to provide remote communities in third world countries with essential medication and water cleaning tablets. He came up with this idea in 1988 while working on the British Aid Program.

Dr. Maritta Koch-Weser is CEO of The Global Exchange for Social Investment – GEXSI, a UK Charity and LLP. She has a distinguished career in international development, as an anthropologist and environmentalist, and has led major environmental & social assessment tasks and investment programs in the agriculture, forestry, mining, energy, and urban-industrial sector. She worked at the World Bank for 20 years where she held senior managerial positions and is closely associated with the build-up of environmental & social programs and policies . She also served as Director General of IUCN -The World Conservation Union. Mrs. Koch-Weser is the Founder/ President of Earth3000, a globally oriented non-profit organization that was founded in 2001. Earth3000 supports strategic innovations in governance for environment and development through academic, executive, advisory, board, project, and outreach engagements. She is currently coordinating the “Amazônia em Transformação – Historia e Perspectivas” Program at the Institute for Advanced Studies at Sao Paulo University, Brazil.

Fabian Hemmert is a design researcher, born and raised in Germany. During his studies towards an M.A. degree in Interface Design, he worked for Nintendo of Europe and Marvel Comics. He currently finishes his PhD at Deutsche Telekom Laboratories, with a focus on new ways of interacting with technology.

Growing up in Berlin, Raul early on dedicated his life to creating change. He enrolled at the Berlin University of Arts, studied design thinking, created a campaign for the Right Livelihood Award, trained as a radio host with a call-in show for people in emotional distress, confronting himself with poverty, abuse and loneliness in the dark niches of the welfare state. Reacting to these social issues with a spirit of inclusiveness, participation and entrepreneurship, Raul co-founded the SOZIALHELDEN platform, a multi-award-winning group of extraordinary changemakers, of which he is one of the creative masterminds. The group has a track record of creating successful, sustainable and well marketed social innovations, including

Matthias Kröner is the CEO of FIDOR Bank AG, where he is responsible for investor relations, corporate communications, strategic development and communities. He is a passionate and knowledgeable entrepreneur and has developed many innovative concepts into successful business models. With vast experience of creating new media presence on the pedestrian zones of the internet, Matthias Kröner provides insights into how to be best positioned in the market place.

Dr Peter Lovatt is a Reader in Psychology at the University of Hertfordshire, where he heads the Dance Psychology Lab. Before embarking on an academic career Peter was a professional dancer. Peter has a BSc in Psychology and English (University of Surrey), MSc in Neural Computation (Stirling University) and a PhD in Experimental Psychology (Essex University). Peter carried out his post-doctoral research at Cambridge University and he founded the Dance Psychology Lab at the University of Hertfordshire in 2008. Peter carries out experimental psychological research in dance and dancers, exploring areas such as Dance and Thinking, Dance and Perception, Dance and Hormones and Dance and Health. Peters is actively engaged in promoting the public understanding of science and of engaging a wide range of people with science and its application. Peter

His explanation was based on published data records from classical endocrinology-diabetology and the modern neurosciences, but argued from both a mathematical standpoint and from a system theoretical standpoint. This represents a completely new methodological approach for obesity research and diabetology. The

Philipp Selenko holds a doctorate degree in biochemistry and is the group leader for In-cell NMR at the Leibnitz Institute of Molecular Pharmacology (FMP) in Berlin. He was the first scientist to employ high-resolution NMR spectroscopy to study proteins inside live cells. The overall aim of his research is to develop tools for observing biomolecules in their native cellular environments and at atomic resolution. Prior to his appointment as group leader at the FMP, Selenko held a fellowship in the Department of Biological Chemistry and Molecular Pharmacologiy at Harvard Medical School and at the European Molecular Biology Laboratory in Heidelberg, Germany.

Janine R. Wedel writes about power, influence, and public policy through the unique lens of a social anthropologist. A professor in the School of Public Policy at George Mason University and senior research fellow at the New America Foundation, Wedel is the first anthropologist to win the Grawemeyer Award for Ideas Improving World Order. Previous award recipients include Mikhail Gorbachev and Samuel Huntington. After nearly 30 years studying communist and post- communist societies, Wedel has turned some of her energies to the United States. Her book

After studying architecture in Berlin, Stuttgart and New York, Tobias Wallisser worked in the United States, Netherlands and Germany. For 10 years Tobias was Associate Architect at UNStudio in Amsterdam, where he was responsible for a series of high profile projects like the Stuttgart Mercedes-Benz Museum which has attracted worldwide attention for its innovative spatial concept. 2007, he co-founded LAVA (Laboratory for Visionary Architecture) with Chris Bosse and Alexander Rieck. LAVA is an architecture think tank with offices in Stuttgart and Sydney and operates as a network of specialists. They gained recognition with the prototype for the future hotel, the Schumacher Tower, the green void installation and their winning competition entry for the center of the Co2-emission-free city Masdar. Since 2006, Tobias Wallisser is Professor of Innovative Construction and Spatial concepts at the State Academy of Fine Arts Stuttgart.

A story teller from an early age, I was born in the city of a thousand and one nights, into a family with a history of storytelling, spiritual healing, philosophical teaching and writing. I studied in the inspirational city of London, at the avant-garde Architectural Association School of Architecture. My creativity has been nurtured in Berlin, my home for the last seventeen years. Here my passion for visualising time has manifested itself through short story writing and creating art, including: ‘The Media Garden’, a 30 metre installation of poetry in motion. A time Machine created for the German Pavilion, Expo 2000, Hannover. ‘Alusi Ephemeral Art’, founded in 2004, selling the concept of time passing, in the form of art works of wax consumed by the music of changing flames. The most valuable in all this need for visualising time, is finding joy in creating a story in answer to the meaning of life, a little story of moments of happiness and their influence on my life, a story I would love to share with many people.

In 2007 anOtherArchitect [aA] was founded by Daniel Dendra as a multidisciplinary platform for digital design with a focus on sustainable strategies, connections between virtual networks and real tectonics and urban design processes. Ever since aA has served as a cooperative platform for architects, artists, fashion designers, landscape architects, environmental specialists and structural engineers. Before founding aA Daniel Dendra was working at various design offices in London, Moscow, Düsseldorf and Rotterdam such as A.M.O. (Rem Koolhaas) and Zaha Hadid Architects. In 2008 Daniel was nominated for the International Chernikhov Prize. His work was widely exhibited at locations such as the Royal Academy Summer Show 2008 (London), the International Model Festival in Budapest in 2008, Milan Furniture Fair 2009, Furnex Cairo 2009, Parametric Prototypes (Xian – China) 2009, +20 Cairo 2010 and the Venice Architecture Biennale 2010. After leading a studio together with Dr. Jenny Lowe at Brighton University (UK) Daniel Dendra was appointed visiting professor at DIA (Dessau Institute of Architecture | Bauhaus Dessau) in 2007 where he is leading a design studio. Since 2010 Daniel has become a studio master of GREENlab together with Thomas Auer (Transsolar) at the Ecole Spéciale d ́Architecture in Paris (ESA Paris). In 2008 Daniel was curator of CANactions 2009 – a festival for young architects in Kiev, Ukraine. Daniel Dendra is a founding partners of the OpenSourceDesign Network: OpenSimSim.

Sebastian Dittmann was born in 1980 in Plauen, Germany. He has worked in the fields of media, IT and virtual worlds. After his graduation in media economics at the technical university of Ilmenau he founded Audanika GmbH, a company dedicated to creating digital virtual music instruments. At their core these instruments transform complex harmonic concepts into easy to use graphic user interfaces so users are not required to understand these concepts anymore in order to use them intuitively.

German-born Spanish singer Laura López Castro is joined by French-German guitarist Don Philippe (aka. Philippe Kayser) to play songs from their latest album, OPTATIVO. Some are inspired by López Castro’s own history: the stories she has heard from her Catalonian grandmother, who was imprisoned under Franco for selling beans without a license. Others were stirred through conversation with the Sin Papeles, anonymous African labourers who bring in Spain’s peach harvest each year. López Castro and Kayser draw from the hum of the city streets, the soundscapes of Latin America, and the rhythm of Africa to produce a playful collage of sound as light and warm as a Catalonia’s autumn breeze.

TrendOne is Europe’s leading trend research institute and the market leader in the identification of key trends in fastchanging industrie sectors. As such, TrendOne identifies over 330 microtrends worldwide every month with a focus on marketing, media, service and product innovations. The institute also offers the Trendexplorer—an extensive trend database with over 14,000 micro-trends and has an international trend scouting network of over 80 freelance scouts across the world. TrendOne’s Norbert Hilliger and Nick Sohnemann will take you on a multimedia, video-based journey into the future.

Stefan Münch describes himself as an enthusiast for the fascinating world of design and fonts. He has been working as a designer in Essen for 10 years. Specialising in accessiblity, usability and credibility he cherishes the virtues of standard conform web design, always seeking the next cutting edge technology that helps dismantling barriers between companies, content and users.