This is the first-ever TEDxOsaka event and was designed intentionally as a low-key, invitation-only gathering of people who may be interested in creating a much larger TEDxOsaka event in future. Eight Kansai-area presenters were selected and two TED videos will be shown. Following the presentations a party will be held at the same location. The gathering of a diverse group of creative people for the purpose of sharing ideas was the main goal behind this event. The aim is to also generate some excitement regarding the idea of organizing a larger event in future.

Since the triple tragedy of the earthquake, tsunami and the Fukushima Nuclear Plant, Douglas Schafer, entrepreneur and 19 year resident of Japan, has made several volunteer trips to the Tohoku region. He will share his story of emergency shelter life and a side of the tragedy that we don’t often read, see or hear. How human connections and even smiles can be created during times of tragedy via the unlikeliest of methods.

Juho Viitasalo is a Finnish industrial designer in Japan. He works with consumer product development among others. Juho will talk about how 3D printing will revolutionize manufacturing and open new possibilities. The way we perceive the products we use every day will change in the future.

Markuz Wernli Saito exhibits his relational and culinary take on art – convivial situations that bring about relations and potentials among people that otherwise remain dormant and invisible. Markuz will share two of his recent experiments: One as a tourist with acute memory loss in a small town in Sardinia, the other as proprietor of a chic restaurant in a desolate Korean shopping arcade that runs without menu and money.

Musician, Educator, Therapist, Life Philosopher / United States / Mexico Freddie will be talking about the importance of having more inspiration in one’s life and how to live with a greater sense of purpose and meaning. He will also talk about what has inspired him from living in Japan and important lessons learned there. Finally he will perform one of his musical pieces at the end of his discussion. website: www.hypnotherapy-osaka.com

Astrobiologist/ Russia A story about an insect blessed with “extreme abilities to survive a dry spell” and it’s way from a rock pool in Africa to the space mission to Mars. If you look carefully, there are a lot of “must-know” secrets even in the smallest creatures and those discoveries can contribute greatly in technology, medicine and even space science. The beauty of science is all around us just take a closer look.

Chief Designer/ Mexico The presentation centers on the intuitive nature of design, and how does it apply to transport design. Design must be at the center of new transport development. Technology is meaningless unless it connects with people’s lives. With the future increase of use of public transportation systems, we will all have our lives affected directly or indirectly by the proliferation of modern modes of transportation.

Filmmaker / Educator/ Canada David will be showing a short film that he recently has written and directed. Synopsis: An English Professor working at a foreign language university goes through a transformative crisis when his outsourcing company terminates his contract prematurely. The book, A Whole New Mind by Daniel Pink, inspired the film.

Best-selling Author / Presenter / Educator/ Japan Garr Reynolds is an internationally acclaimed communications expert, and the creator of the most popular Web site on presentation design and delivery on the net: presentationzen.com. He will be talking about the need for a more naked approach to communication and presentation in our high-tech times. 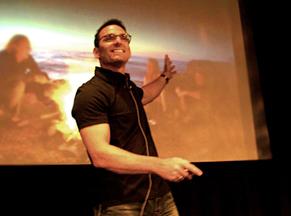