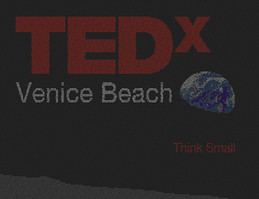 The world is getting so big and connected that we forget how important the little things in life are to us. Like a smile from a passing stranger, the small of fresh baked bread, or when we get a really good parking spot.

We also overlook problems right in our neighborhoods for problems taking place globally or nationally. Not that these problems are worth our time but shouldn't we be more balanced or even more attentive to local issues?

The world of science and technology is shrinking too. Nanotechnology, Wearables, sensors, drones, cars, and even social networks.

Think small means looking at the life you have right in front of you and the life you can't even see but it is right under the skin and more complex and nuanced than the remainder of the worlds around you.

think small means prioritizing you, your family, friends and neighbors instead the corporation you work for, your country or the world at large.

The world is a big place and to make sense of it all, sometimes it helps to think small.

(We were inspired by this TEDx talk: http://www.ted.com/talks/neil_pasricha_the_3_a_s_of_awesome)

At the next TEDxVeniceBeach, we will…

Explore the human experience. Our commute, our workspace, our homes, our third places, our community, our relationships, our families and our friends.

Learn about the smallest elements of life and the universe. Drones, nanotechnology, subatomic particles, neuroscience, and biology.

Understand how to turn an idea into a project, recruit a team, leverage resources, build relationships, and measure success.
Witness how perspective shapes ideas. Your view of anything depends on where you are in relation to that object.

Design, politics, architecture, art, music, science are constantly judged. Our hope is to look at the perspective from which they can be judged and how that affects opinions towards concepts in those areas.

Ashley Crowder is the co-founder and CEO of VNTANA, the first scalable, affordable and interactive hologram system on the market. Before VNTANA she graduated from the University of Southern California with a bachelors and masters in engineering. She applied these skills at BP where she devised the production strategy for multiple products for the West Coast refinery, managing cross-functional teams to ensure maximum profitability. She always had an interest in production and AR so she also gained experience with event production at MTV Networks in Los Angeles working on shoots and the MTV Video Music Awards. Later she worked in London as a Production Assistant for INCA Productions, planning events to be executed in multiple countries. As VNTANA’s CEO, she uses her engineering knowledge and production planning skills to manage the direction of VNTANA’s technology.

Ben Forman is the Co-Founder of Intuitive Motion, makers of the ZBoard Weight-Sensing Electric Skateboard. When not skateboarding loves USC Football and his dog “Sage.”

Brad Kay is a pianist, music historian and composer. He specializes in music from the ragtime era, the 1920’s, and 1930’s. Besides leading his own bands and playing as a sideman, he is a solo entertainer. In his solo performances, he plays and sings from a vast repertoire of the century's popular music, from vaudeville routines to romantic ballads to hot instrumentals. He laces it all together with his clever original songs, improvisations, and wit. And always with a powerful yen to delight his audience.

Claire L. Evans is a writer and artist working in Los Angeles. She is lead singer and co-author of the pop group YACHT, and the co-founder of the mobile app 5 Every Day. A science journalist and science-fiction critic, she is currently Futures Editor of Motherboard and a regular contributor to Grantland, VICE, and uncube magazine. She regularly participates in panels, conferences, and screenings on the subject of science and culture, including Moogfest, Eyeo Festival, WIRED x Design, the UCLA Center for the Art of Performance, the Kitchen, the Rubin Museum, the Hirshhorn Museum, and the Center for Science and the Imagination.

Colin Mangham is an unapologetic marketer, driven to help people exchange value. He’s supported the success of a couple dozen Fortune 500 companies as well as 100+ early-stage ventures. His career-long fascination with how things work and why people do what they do led him to discover biomimicry, innovation inspired by natural forms, processes, and systems. He’s now a bright-eyed advocate (and humble student) of bio-inspired solutions, and he’s eager for you to join him on his learning journey.

A young man of many talents, Dante is the founder of one of the largest weekly poetry venues in the country, “Da Poetry Lounge” in Los Angeles and he has also shared his spoken word poetry on Russell Simmons’ HBO Def Poetry Jam. He has also begun writing and producing his own features with his production company Kinetic Films, including Hang Loose, a (hilarious buddy) comedy with YouTube sensation KevJumba, winning the 2012 Los Angeles Asian Pacific Film Festival Special Jury Prizes for “Best Actor” and “Best Newcomer” respectively. For a full bio visit http://en.wikipedia.org/wiki/Dante_Basco

David Hertz, FAIA, is well-known as an innovative architect, designer, inventor, educator and pioneer in the field of environmental design. Hertz’s architectural practice focuses on projects both residential and commercial in scope with particular experience in climate responsive, environmentally-sustainable and in creative repurposing. As founder and president of Syndesis Inc. in 1983, a multidisciplinary architecture, design and manufacturing firm, Hertz specializes in creating sustainable green building and environmental products. Syndesis achieved international recognition by developing Syndecrete®, a precast, lightweight concrete architectural surfacing material that incorporates recycled aggregates extracted from society’s waste stream. David Hertz and his firm S.E.A. The Studio of Environmental Architecture recently completed the 747 Wing House, made from the wings of a de- commissioned 747 which represents a sublime example of Up cycling.

Light Watkins is one of the world’s leading experts in meditation and creator of The Inner Gym book series. He has taught meditation in several countries, festivals, corporations, community centers and schools. His diverse list of clients include everyone from Oscar-nominated actors to stand-up comedians, dentists and lawyers.

Matt is a social entrepreneur in the fields of personalized health and future medicine. In 2013, Matt founded the Ultimate Human Foundation, a non-profit with a mission to transform world health and assist in eliminating chronic pain and disease from the planet. Matt has founded 7 businesses in health and medicine over the past 10 years, most recently launching ph360.me, the world’s first smart health app based on personalized epigenetics and gene expression.

Place a camera in Nicole’s hands and she will capture the truth hidden in the human soul and in the earth’s landscape. Nicole graduated with a BA in Communication Studies from UCLA in 1989 and later studied fashion at Parsons School of Design in Paris, France. After 7 years at Sony Studios, Nicole created Simul-Sports, Inc., an interactive start-up funded by Sun Microsystems. Nicole went on to create, design and produce her photographic work in her first publication entitled RARE (Daab Books, 2008) followed by two children’s books: Romeo Loves Juliet and Much Ado (2011). Nicole’s most recent installations are the OOMO Cube (oomola.com) in downtown Los Angeles and her Hello Kitty: All Stacked Up sculpture (Exploring the Super Cute World of Hello Kitty worldwide traveling exhibition 2014-2018). Nicole’s OOMO Cube was awarded LA Weekly’s Best Public Art 2014 and the President’s Award from the Japanese-American National Museum.

Robert is the Founder and President of L.A. Kitchen (LAK), which recovers fresh fruits and vegetables to fuel a culinary arts job training program for men and women coming out of foster care and older men and women returning from incarceration. LAK also operates Strong Food, a social enterprise that employs graduates and earns revenue via senior meal contracts. Robert pioneered this model during his 24-year tenure as the President of the DC Central Kitchen, the country’s first “community kitchen.” Since opening in 1989, the Kitchen (which is a $11 million a year, self-sustaining, social enterprise) has produced over 30 million meals and helped 1,000 men and women gain full time employment. He was the recipient of the Restaurant Association of Metropolitan Washington’s “Lifetime Achievement” award and the James Beard Foundation “Humanitarian of the Year” award. www.lakitchen.org @robertegger @TheLAKitchen

Dr. Harrigan’s main research interests include the evolutionary biology and ecology of species and species complexes, including infectious diseases. Separate and yet not mutually exclusive forces often contribute to the complex relationships we are witness to across the globe. Particular interesting are cases where additional anthropogenic forces are likely contributing to already complex natural processes. Increases in global transport, land use conversion, and climate change all dramatically alter the way in which humans interact with infectious diseases, and understanding these changes is key to preventing epidemics. Dr. Harrigan’s current work is focused on how anthropogenic stressors have affected the spread of recently introduced, multi-host pathogens such as avian influenza and West Nile virus, and how migrant bird populations have been affected by such introductions.

Along with being the 1st and only poet to have a poem named ‘download of the week’ on iTunes; this National Poetry Slam Champion and 4X National Poetry Slam Finalist has been featured on a variety of media outlets including 7 appearances on 6 seasons of HBO’s Def Poetry, NBC, Oxygen Network, Current TV, Nike Battlegrounds, Reebok, adidas, NBA, CNN, ESPN, Complex and Billboard Magazine, several national commercial spots, 5 National Tours including the Tony Award Winning Russell Simmons presents Def Poetry Jam International Tour and 2 Spoken Word documentaries, SP!T and the sequel to 1997’s cult doc Slam Nation, Slam Planet. Shihan is the current voice for The Sprite Street Mix, a radio program broadcasted in over 14 countries in Africa. He’s also one of the founders of the nation’s largest weekly open mic, Da Poetry Lounge. His abilities to transcend cultural and generational boundaries have made Shihan a much sought after talent.

I describe myself as an Architect, Artist, Athlete, Musician and a Dad. As the Design Director for the Aviation and Transportation studio for Gensler, I sometimes lead the design of very large, complex civic commissions. I’ve led the design of SFO Terminal 2, San Jose Airport and Incheon International Airport Terminal 2, as well as museums, concert halls and theaters around the world. I’m passionate about living a healthy and creative life. I aspire to leave a completely worn out, well-travelled, very old corpse with every mile and creative drop completely squeezed out of it. Lately I have been pondering the relationships between music, design and architecture and how to enhance creativity. 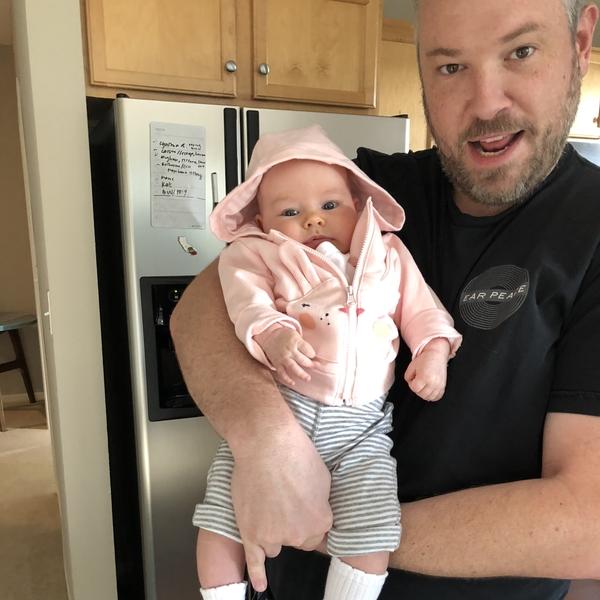 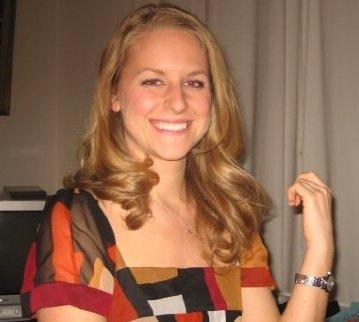