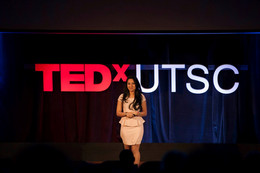 We are all born with unbiased and prejudice-free minds. However, upon entering the vicious cycle of life – social pressure, conformity and expectations, our ability to innovate and dream, slowly shrinks. It then becomes a distant image in the backdrop, enslaved by norms and restrictions. TEDxUTSC 2015, for the 3rd year, invites you to resurrect your talents, aims and ambitions; it gives you the chance to challenge what is perceived to be, the impossible.

Unleash The Fantasy is the cradle of boundless imagination and genuine zeal. The theme conveys the endless human aptitude to explore and inspire beyond the conventional framework, to excite and aspire, overcoming every obstacle in the mighty pursuit of achieving your personal YOUtopia. Join us! Break the shackles and dive into the vivid world of your own imagination. Dream as you have never dreamed before, reach for whatever feels unreachable and follow us on a life-changing journey.

As an advocate of equal opportunity, equity and justice, University of Toronto Scarborough is dedicated to fostering, not only the academic performance, but also the creative genius within every student. TEDx and UTSC are converging powers and passions to provide YOU with a landscape of unlimited opportunities.

Brett and Lenard are both professors at the University of Toronto Scarborough and have been performing together for almost 20 years as of 2015. They have been featured as soloists and collaborators across Ontario. Learn more about Lenard at: http://www.lenardwhiting.com/biography.html and learn more about Brett at: http://www.madawaskaquartet.com/bio/brett-kingsbury/

Brian Harrington is a lecturer in the Department of Computer and Mathematical Sciences at UTSC. After completing his BSc in Computer Science (co-op) at UTSC, he went on to earn his M.Sc. and Ph.D. in Computer Science from Oxford University in the UK. He then spent several years as a lecturer in the research faculty at Oxford, before a brief stint as a researcher at the University of Wisconsin led him back to his Alma Mater where he has been lecturing since 2012. His research focuses primarily on the interaction between natural language processing and Artificial Intelligence.

Daniel Tysdal has been a Senior Lecturer in the Department of English at UTSC since 2009. He is the author of three books of poetry and the poetry textbook, The Writing Moment: A Practical Guide to Creating Poems (Oxford University Press 2014). He is the recipient of multiple awards for his work and his research interests include creative writing and poetry.

Dr. David Bristow received his Ph.D in Civil Engineering from the University of Toronto. He is a postdoctoral fellow at the Centre for Resilience of Critical Infrastructure. David’s research concerns developing and applying systems methodologies for decision making and analysis in the areas of sustainability, resiliency, and risk assessment.

Donald Schmitt, an alumnus of the University Of Toronto Faculty Of Architecture and is a Principal in his firm, Diamond Schmitt Architects Incorporated. A Fellow of the Royal Architectural Institute of Canada, he and his firm have won over 200 design awards including six Governor General’s Awards. He is also the Founding Chair of the Public Art Commission for the City of Toronto for which he was awarded the Civic Medal. Donald strongly believes that the architecture of a structure can have a profound and positive impact on both the environment, and the interactions and rituals of everyday life.

Dr. Jessica Dere is a clinical lecturer in the Department of Psychology and the Graduate Department of Psychological Clinical Science at UTSC. She obtained her Ph.D in Clinical Psychology from Concordia University in 2012, and completed a post-doctoral fellowship in the Social Aetiology of Mental Illness (SAMI) training program at the Centre for Addiction and Mental Health (CAMH). Her research interests include the role of cultural factors in emotional processes and cultural variations in symptom presentation of depression and anxiety.

Seamlessly stumbling through her final year in 2015 at the University of Toronto Scarborough Campus with a double major in Psychology and Art History is Joanna Tence. Tripping over words, instruments, and tables (most especially tables), she gracefully catches herself after meandering in personal thought and into an acceptable closing pose. To put it simply; her songs are about life. To put it more complicatedly; her songs are about life. A roller coaster of emotions, so they say, and Joanna hates roller coasters (and trite idioms), but, slowly and surely, will find herself in one almost instantly. So it goes!

John River, born Matthew Jonathan Derrick-Huie was raised in Mississauga Ontario. John is a 20 year old, well-rounded and musically adept rapper/producer who not only conveys his own message and story through his music, but also that of his peers. John River broke into the music industry in early 2012 at the age of 17 when he released his ﬁrst single, “Every Evening”. The song generated 50,000 views on his YouTube channel, making it the highest played video on his channel thus far. Since “Every Evening”, he has released 5 other songs and their accompanying videos, which have collected a total of 100,000 views on YouTube. John River’s ﬁrst project, The Calm, released in November of 2012, was critically acclaimed and received positive feedback from various media outlets. John is currently working on his second project entitled The Storm.

Lynne Stewart is an alumna of the University of Toronto with a Bachelor’s degree in Psychology. She completed her MBA part-time while working in the Investment Bank at CIBC. She now runs a Pilates, Yoga & Wellness studio (SOL BARRE) and speaks and instructs on posture and wellness in her community. She has an amazing outlook on life that inspires others to connect to their community, their passions, and find balance and great health.

Mandekh Hussein is in her final year as an International Development Studies (co-op) student at the University of Toronto. She actively aims to reconfigure the boundaries set by society so that more individuals are able to live their lives in a manner that makes them happy and unafraid of judgment. Her work experience in both Kenya and Mozambique has shaped her understanding of international aid and support. Her interests lie in human security development in conflict and crisis settings. She is one of the founding members of MAANTA International, an organization aiming to increase access to education and creating empowering environments to young women in the Horn of Africa.

Marnie McBean is one of Canada’s most decorated Olympians, and an expert in turning potential into performance. She is one of only two Canadians ever to win three Gold medals in the Summer Olympics –Barcelona ’92 and Atlanta ’96. She is a member of the Canadian Sports Hall of Fame and a recipient of the Governor General’s Meritorious Service Medal. After her record-breaking rowing career, she worked as a Specialist in Olympic Athlete Preparation and Mentoring, helping athletes transform their potential into reality. She has also authored her first book titled “The Power of More”.

Dr. Rene Harrison is an Associate Professor and Associate Chair of Research & Graduate Studies in the Department of Biological Sciences at UTSC. She completed her Ph.D at the University of Toronto, and received numerous research awards including a Canadian Institutes of Health Research (CIHR) New Investigator Award. Her research work includes the study of how disease/infections modulate the microtubule cytoskeleton and the effect it has on cellular events. She also led an experiment on whether microgravity compromises bone cell architecture (specimens were sent to space).

Rohit Gandhi is an international journalist, war correspondent and documentary filmmaker. He has worked as a producer for both CNN International and CBC, and has twenty years of experience across forty countries. He was awarded an Emmy for his documentary ‘The Afghan Warrior’, and continues to produce journalistic work that speaks to global audiences. He is currently the Founder and Managing Editor of South Asian International News and considers his journalism to be without borders.

Teresa Auntora Gomes is a student of life, Public Policy and International Development Studies at the University of Toronto Scarborough Campus (UTSC), who stands for global peace/justice, resistance and love. She is passionate about international affairs and actively engages in her local and global community. She created an initiative called Education & Equity for Women in Nilphamari, Bangladesh and hopes to continue initiatives that will inspire others.

Thakshikah Stitharan is a classically trained Bharatanatyam dancer and has been performing since the tender age of 5. She is currently enrolled as a student at the University of Toronto in the Life Sciences program. She completed her arangetram (dance graduation) in August 2011, received a Top Talents award for “best classical dancer” and was the cover page model for the wellknown Ninaivukal magazine for 2014.

Dr. William Gough is Vice-Dean of Graduate Education & Program Development and a Professor in the Department of Physical &Environmental Sciences at UTSC. He completed his M.Sc at the University of Toronto in Physics and a PH.D at McGill University in Atmospheric and Oceanic Sciences. His research includes the climate change impact assessment, hurricanes, climate change in the Eastern Arctic and the climate of Toronto.