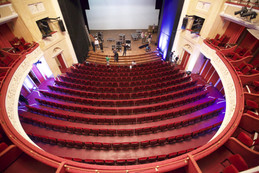 Our sixth major annual event held at a wonderful, historic theatre in the centre of Warsaw.

HOFESINKA is a group of comedians performing one of the most spectacular and lively types of comedy – improvisation. Improv is a performance created live, by actors making it up in front of the audience. Constant interaction with the viewers, their active contributions to the show and the choice of topics limited only by imagination guarantee quality fun regardless of time, place and circumstances. Trained at the famous iO Chicago improvisational theatre, they define their style as a combination of the Chicago and Lublin-Mazovian improv schools.

Woodsmoke Avantgarde Trio is a project founded by two young musicians from Poland accompanied by a few other instrumentalists. Their goal is to mix dense old-time ambience with progressive melodies and rhythms into music sought by fans of modern instrumental art. To achieve this they exploit sounds of different acoustic instruments: from piano, guitars and strings to accordion, flutes and cellos. Their inspiration comes from many genres such as ambient, jazz, post rock, folk and classical music. They have just finished working on their debut album ’Places from a distance'.

Alicja Peszkowska is not only a new technologies and social change blogger but also a community builder. She co-built Warsaw NetWtorek community and took part in organizing first Polish social hackathons - SocHack. At the Open Knowledge Festival and Non Profit Technology Summit she spoke about community building and how new technologies change the world. Alicja works at Fundacja TechSoup where she focuses on transparency, accountability and e-participation projects. Her interests range from open data and free internet to popular culture. Not only did she use to be a regular film critic for the Polish KINO magazine but she also organized and took part in two booksprints. Did we mention she also sings in a band "niskie ciśnienie"?

Our next speaker, Andrzej Lubowski, moderated first ever TV debates between Solidarity and the communist government of Poland in 1981. He's the author of i.a. “Zbig. The Man Who Cracked the Kremlin” currently on the path of writing a new book. A Varsovian by birth and upbringing, Andrzej has lived in the USA since 1982 where he worked in senior executive positions for major international companies. He has served as an adviser and a board member in American and European companies as well as non-profit organizations.

After 1,000 kilometers across 4 deserts, Daniel Lewczuk never runs out of steam as a serial entrepreneur and career transitions guru. Active in driving social change, he translates the experience of fighting the forces of nature into a fascinating story of perseverance and hope in the face of adversities - always running on all cylinders.

For the last 7 years Emma has been working as a performer in Wroclaw with two multi award winning companies of international renown: Teatr Piesn Kozla and Teatr Zar. Their work is both physical and vocal and works is ensemble work. Working with these companies has allowed many first hand contacts with master singers, ranging from Siberians to Armenians and Persians. Emma has also been on research expeditions to Georgia, Armenia and Sicily the Western Isle of Scotland to learn song and sounds from the people who still hold original and ancient traditions of music and polyphony. She works in both in London and Wroclaw as a singing teacher for both groups and individuals and trains professionals, amateurs and those who want to find their voice.

Jakub Stefek is an organ student at the Fryderyk Chopin University of Music, where he has been the Chairman of the Students’ Council for two years. He has taken part in many competitions and music courses. He divides his time between solitary work on his instrument and meetings and conversations with people of diverse professions, trades and walks of life. Where these activities meet, his reflections about culture and its creators come to life. Thanks to his company management studies at the Warsaw School of Economics, he slowly works on making his dream come true: to be a total manager of culture, knowing the art inside out and shaping it according to the times we live in. This is the question which, using the example of organ music, he discusses in his Master’s Thesis. The art of creativity in disciplines and times seemingly buried in history forever.

Kinga Panasiewicz is a young neuroscientist who conducts research on how the cognitive and behavioral functions depend on neural impulses in the brain. Her research project represented Poland during the Intel International Science and Engineering Fair in Phoenix, Arizona in 2013, where it won the second prize in Medicine and Health Sciences. In recognition of her work, MIT Lincoln Laboratory named a recently discovered planetoid (29762) ‘Panasiewicz’. She successfully represented Poland at the World Neuroscience Competition in Washington and was awarded a scholarship by the Minister of Education. Kinga actively popularizes knowledge about the brain and supports foundations which improve the quality of life for people with brain diseases. In 2014 she appeared on New Europe 100, the list of Central and Eastern Europe's top 100 innovators, co-created by Google, Financial Times, Visegrad Fund, Res Publica Nowa magazine and many other European institutions.

Michał Krupiński is a physicist who holds a passion for popularizing science. He currently works in the Institute of Nuclear Physics, Polish Academy of Sciences where he studies nanomagnetism, researches new materials and discovers their previously unknown properties. He holds a strong belief that new physics is participatory and everone can contribute to it. In this spirit he cooperates with organizations such as Polish Children's Fund, and Children's University.

This year's high school graduate, she started her career when she was only 16, researching the influence of buff-tailed bumblebees on tomatoes. She is a winner of many prestigious awards for young science enthusiasts, such as EUCYS, E(x)plory, the International Environment and Sustainability Project Olympiad INESPO and Google Science Fair. Currently, she is an intern at Joint Research Centre – Ispra in Italy.

Paweł Najgebauer is an instructor at Szkoła Impro and an improviser at HOFESINKA and Klancyk! theatres in Warsaw, he was trained at improvisation centres all over the world (iO Chicago, The Second City, The Annoyance Theater, Impro Melbourne), under supervision of the best instructors from the USA, Canada, Australia and Great Britain. Over the last year, he has taught over a hundred impro workshops and performed in over a hundred impro shows all over Poland. He is most often seen on the stage of Klub Komediowy at Pl. Zbawiciela in Warsaw. He teaches and performs both in Polish and English languages.

Robert Krool is a mentor and a developmental diagnostician. Over his 26-year-long career, he has committed more than 10 thousand hours to personal consultations and has carried out two thousand individual analyses of behavioural attributes and their usefulness in managerial and expert roles. A strategy director at 50 projects for the implementation of useful organizational changes, he has conducted over 10 thousand hours of mentoring sessions and has participated in taking up decisions worth over 5 billion PLN collectively. One of the few court appointed experts in the country in the area of restructuring and risk assessment in business. He was ranked as 7th in the THINKTANK magazine’s ranking of the most influential business advisors in Poland. He has written eight books and his seminars have attracted over 500 thousand managers and entrepreneurs.

Shirin Naeimi is a women’s rights activist. Opposing the Iranian regime’s treatment of women, she was forced to flee to save her life. Her ride to freedom has been long and bumpy, and it took a long time before she could speak openly about her experiences from our stage in Warsaw. She believes that success is still a long way away, but she is optimistic and looks forward to the future, cherishing every moment of freedom as she goes.

Beer blogger with the biggest audience in the World, international beer judge, homebrewer collaborating with craft breweries. In short, a true beer geek. 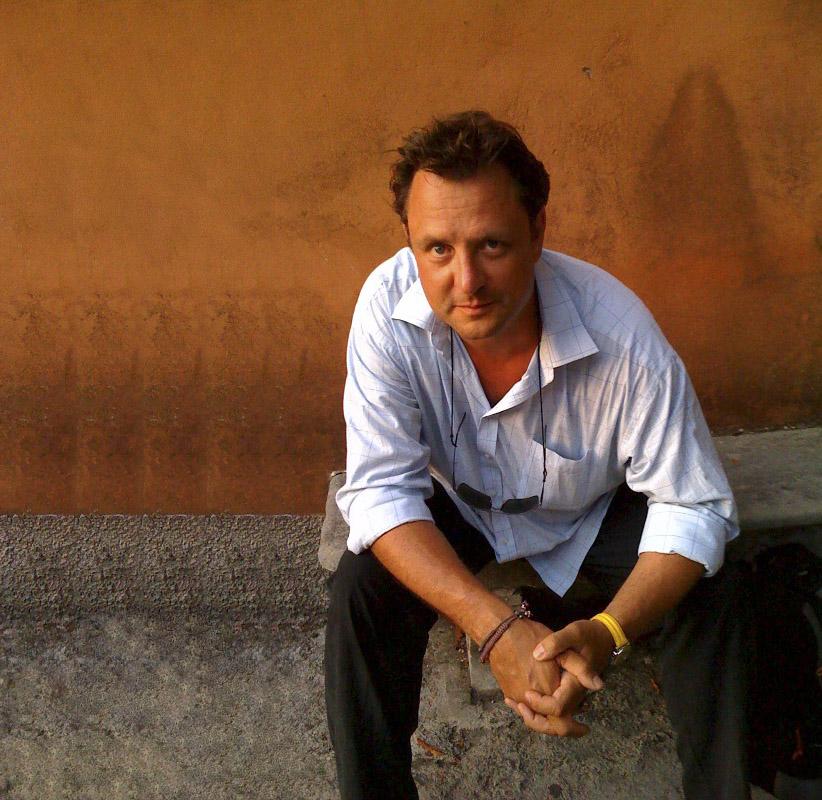