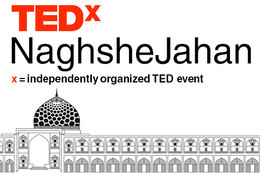 TedxNaghshejahan is the first Tedx event in Isfahan . Our main purpose of the event is to introduce Ted and Tedx to people and create conditions to spread of worth ideas . Since we does not have the context of present and support these ideas in our city so we can provide Conditions to all people from Authorities , elites and ordinary people to support and spread these ideas .
We select "A Dream Come True " for our event and we select speakers of the event who have worth ideas and could spread their ideas and come true their ideas .

Alireza Doostani was born in 1965 . He started his school Under considerations of patience and forethought parent . He went to Kalim Sanaee elementary school and He went to Adab high school. After he finished his college he started educational science major in university Then he employment to education system of Iran. During 30 years he was teacher in high schools and Cultural Centers . He started cultural tasks and organization for students free time from 1986 . And he started his research :" School and university evolved" in 2009 . He hope young people learn what they like by what ways they prefer, and they get out of domination of imposed Sciences.

She attend medical college of Ardebil Azad University . In her senior year she wrote her first book , named "in the name of me/ Akbars mohr" which were published for two times and received great compliments from literal and artistic communities . After that she wrote "blue pit", "I am a jerk" and "letters to Anita" in that order. She even made a short movie out of "blue pit" which were nominated for "Media Wave" Festival contest , and the "third eye" festival contest of India , which are both from word cup festival. In 2009 she edited a book about dawn syndrome named "An Internal Report" which were published as a catalog and were sent to 30 medical universities all over Iran during the years of 2011-2012 .she has been trying to find the people who are suffering from this disease all over Iran since 2009 and her hardworking through all these years has led to the opening of "wall 47" in current year.

He born in 1982. He completed his educations in architecture with a master's degree in 2009. Then for further educations, he continued his supplementary education in institute of Catalonia, Spain. He started his professional career with architectural offices in Tehran and then resumed with Lab Architecture Studio in Melbourne. In 2012, he designed residential apartments in Abadan and won the gra d prize of architecture in Iran. Lately with designing the city of dreams commercial complex in Isfahan he could won the global architecture festival in 2014. From 2008 he started his scientific activities in Iran. He completed his studies in smart architectural structures and alignment the architecture with geography at international levels. Now he cooperates with School of architecture of Melbourne, Australia as a visiting professor.

He was born in 1970 in Isfahan. He has got his PhD in chemistry in industrial university of Isfahan.in 2003 he became the president of Entrepreneur center of Isfahan university and ever since then he has been doing nothing but, teaching, propagating, judging, evaluating and admitting entrepreneurs because he kept being in positions which somehow were related to entrepreneurs. Some of these positions are listed below: -Chief manager of entrepreneurs center in Isfahan university in 2003-2007 -Executive manager of international entrepreneurs festival of Sheykh Bahaee in 2004-2008 -The manager of Sheykh Bahaee technology center (science and research center of Isfahan)in 2007-2010 -The founder of research and technology fund of Isfahan in 2007 -The board member of researching and technology network of Isfahan in 2011-2014 Since 2010 he has joined the community of entrepreneurs through establishing a small researching Institution and now he is the vice president of a synthetic fiber factory

He was born in 1946 in city of poem and literature , Shiraz . He finished his university in master's degree in hygiene major . Since he loved Persian poem and Persian literature , he started his art activity in this field from 1989 and he dedicated his life to introduce poetry and literature to ordinary people. Since he loved epic songwriter Ferdowsi , he started narrate Shanameh from 1996 to accustom ordinary people to Ferdowsi and Shanameh poems .

He was born on July, 1985, in Dehaqan, Isfahan. He finished their elementary and high school in Isfahan cities. In 2003, He entered Amirkabir University of technology (Tehran polytechnic). After about 6 years, he majored in artificial intelligence. In 2007, he entered Institute for Research in Fundamental Sciences (IPM) to start PhD in cognitive neuroscience. The long-term goal of Mohammad-Reza’s research is to understand neural basis of brain computation so he have recorded from the neural activity of non-human primate brain engaged in cognitive tasks. In his PhD program, he focused on the underlying mechanism of visual object recognition and temporal dynamic of category representation in inferotemporal (IT) cortex. Mohammad-Reza Abolghasemi-Dehaqani is researching in IPM at present.

He was born in a farmer family in Renan village in Isfahan, in 1966. He got his high school Diploma in "Social and Economical science " in Isfahan, then in 1984 he entered the Tehran university and took his MA and Ph.D. in the same major in that university. In 1991 he started his career as a teacher in Tehran university while he was studying for Ph.D. at the same time .Then in 1998 he attend the Department of Economics at University of Isfahan as an Assistant Professor and the then he worked his way up as an Full Professor. He has authored around 12 books, three of them are: "The sound of Siavash wings","bazzar or Na bazzar" (Market or Non Market?) and "The Decline Cycles of Morals and Economy". He also translated some books from English to Persian. Plus he had more than 150 lectures and published more than100 articles. And all of those achievements are just a sample of his entire achievements through all these years.

Morteza Eslami Dehkordi was born in 1983 in Shahrekord city . From childhood he was interested in nature and animals . When he was 14 years old , he started his voluntary activities about wildlife in Darabad nature and wildlife museum . In 2002, he and his two friends Established Iranian Cheetah Society. In 2004 , he became a member of International Organization Committee of experts hyena species conservation (IUCN) that With 21 years of age, he was the youngest expert of that Organization. at first , Mr Eslami started his university in chemical engineering – oil major but he left this major and started natural resources engineering – environmental major in university . And he continued his education in master's degree at the trend of biodiversity.

Soroush Dadyar was born in 1984 in Isfahan . He acceded to Isfahan singing classes at the Conservatory of Music under the guidance of his father, when he was 14 years old . And he learned Mahur system and Humayun system by Taherzadeh's style . Then he learned Passion and belongings of those for 2 years . Take advantages of the presence of the great masters of Iranian music, With many years of strenuous efforts in resolution of Iranian vocal secrets , Performances and concerts in different cities of Iran and also teach song made Soroush Dadyar as a experienced artist who has inspired a new coat of singing.