Written by the educators who created Climate Change, a brief look at the key facts, tough questions and big ideas in their field. Begin this TED Study with a fascinating read that gives context and clarity to the material.

The greenhouse effect has been detected, and it is changing our climate now.
James Hansen, June 24, 1988

The drought that crippled much of the U.S. and Canada in 1988-89 was the costliest natural disaster in U.S. history prior to Hurricane Katrina. It spawned dust storms in the Midwest and forest fires in Yellowstone National Park. That summer, thousands died during an intense heat wave.

It was against this backdrop, on a 101-degree day in the nation's capital, that NASA scientist James Hansen delivered his landmark testimony to the Senate Energy and Natural Resources Committee. The next day, The New York Times ran a headline that read "Global Warming Has Begun, Expert Warns." Coverage of Hansen's testimony by the Times and other national and global media organizations transformed climate change from a relatively obscure scientific topic to one that people began to discuss over dinner, in the pub, at school and at work.

It remained newsworthy over the rest of that pivotal year. Days after Hansen's testimony, the World Meteorological Association (WMO) hosted a conference called "Our Changing Atmosphere," one of the earliest international climate change gatherings. 300 scientists and policy makers representing 46 countries attended. Participants called upon countries to reduce carbon dioxide emissions by 20 percent or more by 2005, and by the end of the year the WMO and the United Nations Environment Program had established the Intergovernmental Panel on Climate Change (IPCC).

British Prime Minister Margaret Thatcher famously became one of the first world leaders to talk about climate change in a speech delivered that September to the Royal Society. "For generations, we have assumed that the efforts of mankind would leave the fundamental equilibrium of the world's systems and atmosphere stable," remarked Thatcher. "But it is possible that… we have unwittingly begun a massive experiment with the system of this planet itself." In this speech and others she gave during the remainder of her tenure, Thatcher advocated for expanded climate research and for policies that would safeguard the environment and promote sustainable development.

As global public awareness of the issue grew in the 1980s and beyond, the science and its significance were vigorously debated. Is there credible evidence that climate change is real? If it's real, when and how will we feel its effects? If it's real, what should be done, and who should do it? (Thatcher herself reversed position many years later, calling climate change "the doomsters' favorite subject" predicated on science that is "extremely obscure" and leading to "worldwide, supra-national socialism.")

Climate change is still hotly contested and the debate is often shrill, with skeptics branded as "climate deniers" and activists derisively labeled "warmists." Tensions are palpable, as when nearly 800 NGO representatives walked out of the 2013 international climate negotiations in Poland.

How has climate change become so politicized? It requires us to tackle thorny ethical and economic dilemmas, like how the least developed nations will cope with the effects of climate change and who should help them. It highlights serious structural issues like how to reckon with entrenched carbon-based industry interests and the connected yet complex resistances to decarbonization efforts. It calls for global governmental collaboration on an unprecedented scale. Atmospheric chemist Rachel Pike comments, "It goes, of course, to the top of our sky, but it goes to the bottom of the ocean, to every corner of the globe. It's every nation, every people. It's political, it's economic, it requires debate; it's scientific, it's engineering. It's the biggest problem you could ever imagine." It's no surprise, then, that climate change prompts a range of individual psychological and collective societal responses—avoidance, fatalism, denial, paralysis and wishful thinking, to name a few.

It's also not surprising that the scientific evidence is contested, given that the indicators of climate change -- like changing precipitation patterns over decadal time scales -- may be difficult for ordinary citizens to detect, and given what's at stake once we acknowledge that those indicators are correct. Initially -- and even today, despite the fact that we've reached the gold standard for scientific certainty -- some have questioned the quantity and quality of the evidence, feeding the public's perception that the science is half-baked. In reality, by the time Hansen delivered his congressional testimony in 1988, he'd been researching the relationship between atmospheric components and temperature since the 1960s, building upon a line of scientific inquiry stretching back at least a century.

A crash course on climate science

During the previous century, French physicist Joseph Fourier (1821) and Irish physicist John Tyndall (1861) described the Earth's natural "greenhouse effect" whereby water vapor and other gases in the atmosphere regulate the planet's surface temperatures. By the end of the 1800s, Swedish chemist Svante Arrhenius had made the prediction that industrialized coal-burning would intensify the natural greenhouse effect. Remarkably, when Arrhenius calculated the quantitative effects on temperature his results were relatively close to what's predicted by modern climate change models.

In the 1930s, British engineer and citizen scientist Guy Callendar demonstrated that global temperatures were rising, using data from more than 140 weather stations around the world. Callendar argued that rising CO2 levels were to blame, but his hypothesis failed to gain widespread acceptance in the scientific community. Two decades later, American researcher Gilbert Plass analyzed the infrared absorption of various gases and created the early computational models suggesting that a 3- to 4-degree rise in temperature would result from doubling the concentration of atmospheric CO2. For the scientists aware of Plass's work, Dave Keeling's findings a few years later were undoubtedly unsettling: the American geochemist provided the first unequivocal proof that atmospheric CO2 levels were increasing, based on analysis of atmospheric samples he collected at the Mauna Loa Observatory in Hawaii.

Many scientists assumed that the world's oceans would absorb the extra atmospheric CO2 that human industry was producing, until American oceanographer Roger Revelle and chemist Hans Suess demonstrated otherwise. The authors of a 1957 National Academy of Sciences climatology report quoted Revelle: "In consuming our fossil fuels at a prodigious rate, our civilization is conducting a grandiose scientific experiment."

Revelle's subsequent testimony before a Congressional committee helped put climate change on the radar of elected officials. In 1965, a presidential advisory panel warned that the greenhouse effect was a "real concern," and the U.S. government's engagement deepened when Nixon established the National Oceanic and Atmospheric Administration (NOAA) in 1970. Political and scientific interest in climate change grew during the ‘70s, culminating in the First World Climate Conference sponsored by the WMO in 1979. The Second World Climate Conference a decade later paved the way for the United Nations Conference on Environment and Development (UNCED) in 1992, where the United Nations Framework Convention on Climate Change (UNFCCC) was launched and the groundwork laid for subsequent international climate change negotiations.

The challenge of communicating climate change

The task of translating climate research for policymakers and the general public has been hampered by multiple definitions of climate change within and outside of the scientific community. As Roger Pielke Jr. argued in his 2005 article "Misdefining climate change: Consequences for science and action," definitions used by the UNFCCC, IPCC and others profoundly influence public opinion and the range of probable policy choices. Additionally, the conflation of "climate change," "global warming" and "the greenhouse effect" in news coverage has fueled public confusion about how to diagnose and treat the problem. For our purposes here, "climate change" is any change in climate over time due to natural variability or as a result of human activity. This is consistent with the IPCC's use of the term.

Rachel Pike's comment that it's the "biggest problem you could ever imagine" reminds us that climate change is a dense and multifaceted issue. There are facets of climate science and policy where convergent agreement dominates, while in other areas, contentious disagreement has generated worthwhile debate and discussion. The media's conflation of these diverse dimensions into one sweeping issue has contributed to confusion and created a breeding ground for manipulation from outlier viewpoints to inadvertently or deliberately skew public opinion.

It's important that we critically assess who ‘speaks for climate change' and understand their agendas. To the extent that their claims are flatly reported, or that in the name of fairness and balance speakers are frequently placed on equal footing irrespective of their expertise, individuals and organizations have become empowered to speak with authority through mass media. This skews how citizens and policy makers understand climate change issues, the stakes involved and the spectrum of possible actions to take. Cognizant of this, in 2013 the L.A. Times announced it would no longer print letters from climate change detractors. L.A. Times letters editor Paul Thornton wrote, "Simply put, I do my best to keep errors of fact off the letters page; when one does run, a correction is published. Saying "there's no sign humans have caused climate change" is not stating an opinion, it's asserting a factual inaccuracy."

About this TED Studies collection

While poorly communicated information can hamper the ability to make important decisions related to climate change causes and consequences, accurate and engaging information accessed through these TED Talks gives you power: power to understand, power to share your understanding with others, and power to take action.

Here we'll consider the environment as our planet's renewable and non-renewable natural resources, and a support system for the quantity, quality and sustainability of human activities. We'll see science as a systematic enterprise that builds and organizes knowledge, sorting through the unceasing flow of human experience. We'll explore policy as guides for decision making about human management of environment, articulating the principles, intentions, and mandates about who gets what, when and how. And we'll contemplate values as systems of conduct and broad preferences (individual to societal) concerning the morality of outcomes.

We begin with three modules that center our considerations on the climate science. First, through science journalist Lee Hotz's TED Talk, we explore the evidence that the climate is changing. Next, photographer James Balog contributes additional compelling, visible, measurable documentation of certain climate change effects. Balog's talk also highlights critical elements of the certainty/uncertainty debate that has dogged the issue. Third, through the TED Talk by climate scientist James Hansen, we explore the convergent agreement in the scientific community that humans contribute to contemporary climate change.

We continue with three modules exploring the politics of taking action through mitigation, adaptation and cross-cutting market-based, risk-reduction regulatory measures. We start with a TED Talk from former United States Vice President Al Gore, who calls for various ways to reduce our emissions of greenhouse gases into the atmosphere (mitigation). Next, we turn to the TED Talk by environmental lawyer Vicki Arroyo, who suggests ways in which human communities can reduce their vulnerability to climate change and increase resilience (adaptation). Then we consider cross-cutting, often market-based risk reduction efforts by way of a TED Talk from journalist Naomi Klein. Her talk opens a space where we can critically evaluate climate risk reduction endeavors such as the market-based cap and trade proposals that are considered an essential tool by some, and merely a shell game by others.

We finish with two modules that focus our attention on important values and ethics questions. First, former UK Prime Minister Gordon Brown challenges us to build a stronger global society by cutting carbon emissions in a way that is beneficial and equitable to all nations. Finally we turn to sustainabily strategist Johan Rockström's TED Talk about how nine ‘planetary boundaries' (which include climate change) can usefully guide ecosystem and environmental protection for future generations.

Let's begin with a look at the scientific evidence that's being unearthed at" the South Pole; science journalist Lee Hotz takes us there via his TED Talk "Inside an Antarctic time machine." 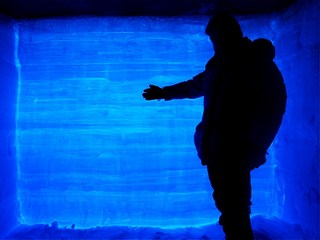 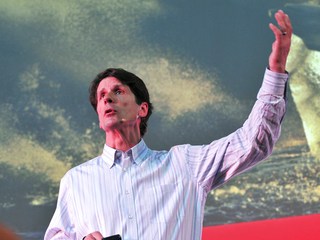 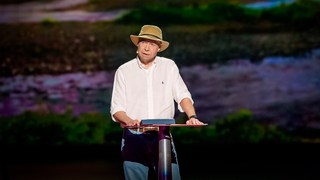 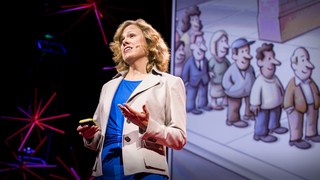 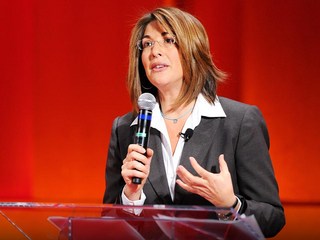 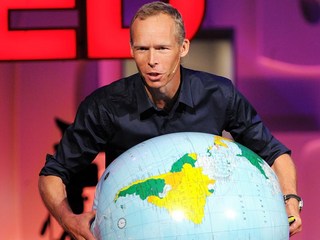