Written by the educators who created The Edge of Knowledge, a brief look at the key facts, tough questions and big ideas in their field. Begin this TED Study with a fascinating read that gives context and clarity to the material.

To the outside observer, it may seem that physics is in some ways the opposite of art and that physicists must sacrifice their artistic intelligence to make way for cold rationality and logic. But nothing could be farther from the truth: Each step forward in our understanding of the universe could not have been conceived without an enormous dose of intuition and creativity.

Physicists are on a quest to figure out how nature works at the most fundamental level. This is a romantic story, penned in what may seem the least emotive of languages: mathematics. What's surprising is that the immeasurable beauty of the world is far from lost once its inner workings are expressed in this abstract language. Moreover, there remains something deeply intriguing about the fact that the universe is governed by the rules of mathematics in the first place. As we'll hear from Murray Gell-Mann in the first of the TEDTalks in The Edge of Knowledge, these beautiful mathematical laws are "not merely a conceit of the human mind" — instead, they're an intrinsic part of nature.

Many successful ideas in science can be described as beautiful and very often this is a reference to the simplicity and conciseness of nature's laws. Einstein's special and general theories of relativity, which describe how space, time and gravity behave, are based on only three brief postulates. The laws of electromagnetism, which govern every aspect of how we experience the worldthrough sight, sound, smell, taste or touch, are so concise thatthey can be written on the front of a T-shirt. The Standard Model of Particle Physics, which describes all of the known particles and three of the four forces that act between them, fits on the side of a coffee mug. As we will hear from Garrett Lisi, looking for beauty in the patterns that emerge in the laws of physics can tell us about how the universe works at the most fundamental level.

Science is a collaborative discipline and a global one too. It is the extent to which scientists cooperate that allows science to move at an incredible pace. The majority of the ideas presented in these TEDTalks have been around no longer than 50 years; some less than a decade. Since these speakers featured in The Edge of Knowledge delivered their TEDTalks, scientists working in global collaborations have developed and implemented several new experimental measurements. Most recently, the European Space Agency's Planck satellite has made precise measurements of the Cosmic Microwave Background (CMB): the results are in agreement with the predictions of the Standard Cosmological Model, which describes how the universe evolved from the Big Bang to what we see today. In Brian Cox's TEDTalk, we'll hear about the search for new elementary particles at CERN's Large Hadron Collider, encompassing the work of over 10,000 physicists from over 100 countries. This search is underway, and appears already to have yielded one of the most important scientific results of the 21st century: the discovery of the Higgs boson, the final ingredient predicted by the Standard Model of Particle Physics.

Notwithstanding the significance of these recent discoveries and their agreement with predictions, our picture of the fundamental structure of the universe is far from complete: a number of big mysteries remain in both particle physics and cosmology. As we'll hear from Patricia Burchat, many of these mysteries link together the physics of the smallest elementary particles and the largest distances of the cosmos. One of the most enduring mysteries is how to reconcile a complete theory of gravity with our understanding of the fundamental particles. From Brian Greene, we'll hear about the potential of string theory to solve this problem and the possible existence of tiny, curled up, extra spatial dimensions.

However, fundamental laws are not enough on their own. Aristotle said that "all human actions have one or more of these seven causes: chance, nature, compulsion, habit, reason, passion, and desire." It's the first of these — chance — that is not decided by the laws of physics; in fact, chance is not decided at all. The fundamental laws of physics cannot predict what will happen; they can only tell us what might happen. This uncertainty is built into the laws of quantum mechanics.

As we'll hear from Aaron O'Connell, the most striking feature of quantum mechanics is that it's weird. For example, we're challenged to contemplate the possibility that a thing can be in more than one place at the same time. It's quantum mechanics, more than any other idea in fundamental physics, which forces us to question our intuition about how everyday objects behave. For the microscopic constituents of the universe, our everyday observations simply do not hold. In spite of its counter-intuitiveness, quantum mechanics has come to define our modern world through the technologies that it underpins. From the tiny switches crammed by the billions onto microchips to medical scanners and laser therapies, all rely upon the weirdness of quantum mechanics.

Ultimately, science remains an empirical discipline. Thinking up beautiful theories is not enough on its own: every theory must stand up to the experimental observations of how nature actually works. If it doesn't, then the theory can't be correct and we must try again. If, on the other hand, our observations and predictions agree, then we're encouraged and — if the evidence is sufficient — we might even dare to claim some measure of understanding.

Through our human creativity, expressed in a process of trial and improvement, incremental advances in our understanding accumulate and scientific progress is made. As the chess grandmaster Gary Kasparov puts it, our success is "the ability to combine creativity and calculation...into a whole that is much greater than the sum of its parts." With each of these steps forward, science closes one more door and moves on to try one of the many, many doors that remain open.

This series of TEDTalks discusses some of the toughest questions and the most profound ideas in fundamental physics. The concepts not only challenge us to think objectively and rationally, but also require us to put aside many of our everyday preconceptions and intuitions about how nature works. Be prepared to re-watch the talks and re-read the supporting material; trying to get your head around 13.8 billion years of the universe's history isn't something you can do in an afternoon!

Let's begin with CalTech physicist Murray Gell-Mann for an introduction to the Standard Model of particle physics and the quest for a unified theory. 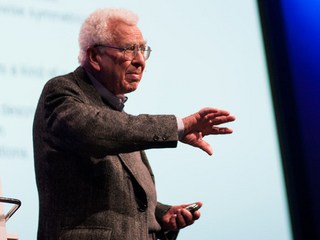 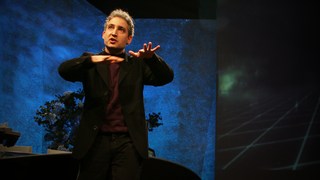 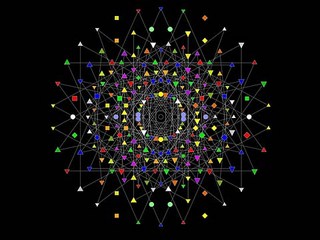 An 8-dimensional model of the universe 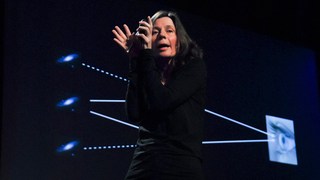 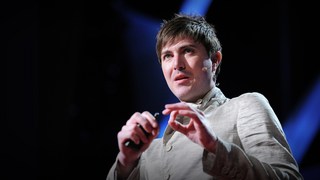