Written by the educator who created What Makes Us Human?, a brief look at the key facts, tough questions and big ideas in his field. Begin this TED Study with a fascinating read that gives context and clarity to the material.

As a biological anthropologist, I never liked drawing sharp distinctions between human and non-human. Such boundaries make little evolutionary sense, as they ignore or grossly underestimate what we humans have in common with our ancestors and other primates. What's more, it's impossible to make sharp distinctions between human and non-human in the paleoanthropological record. Even with a time machine, we couldn't go back to identify one generation of humans and say that the previous generation contained none: one's biological parents, by definition, must be in the same species as their offspring. This notion of continuity is inherent to most evolutionary perspectives and it's reflected in the similarities (homologies) shared among very different species. As a result, I've always been more interested in what makes us similar to, not different from, non-humans.

Evolutionary research has clearly revealed that we share great biological continuity with others in the animal kingdom. Yet humans are truly unique in ways that have not only shaped our own evolution, but have altered the entire planet. Despite great continuity and similarity with our fellow primates, our biocultural evolution has produced significant, profound discontinuities in how we interact with each other and in our environment, where no precedent exists in other animals. Although we share similar underlying evolved traits with other species, we also display uses of those traits that are so novel and extraordinary that they often make us forget about our commonalities. Preparing a twig to fish for termites may seem comparable to preparing a stone to produce a sharp flake—but landing on the moon and being able to return to tell the story is truly out of this non-human world.

Humans are the sole hominin species in existence today. Thus, it's easier than it would have been in the ancient past to distinguish ourselves from our closest living relatives in the animal kingdom. Primatologists such as Jane Goodall and Frans de Waal, however, continue to clarify why the lines dividing human from non-human aren't as distinct as we might think. Goodall's classic observations of chimpanzee behaviors like tool use, warfare and even cannibalism demolished once-cherished views of what separates us from other primates. de Waal has done exceptional work illustrating some continuity in reciprocity and fairness, and in empathy and compassion, with other species. With evolution, it seems, we are always standing on the shoulders of others, our common ancestors.

Primatology—the study of living primates—is only one of several approaches that biological anthropologists use to understand what makes us human. Two others, paleoanthropology (which studies human origins through the fossil record) and molecular anthropology (which studies human origins through genetic analysis), also yield some surprising insights about our hominin relatives. For example, Zeresenay Alemsegad's painstaking field work and analysis of Selam, a 3.3 million-year old fossil of a 3-year-old australopithecine infant from Ethiopia, exemplifies how paleoanthropologists can blur boundaries between living humans and apes.

Selam, if alive today, would not be confused with a three-year-old human—but neither would we mistake her for a living ape. Selam's chimpanzee-like hyoid bone suggests a more ape-like form of vocal communication, rather than human language capability. Overall, she would look chimp-like in many respects—until she walked past you on two feet. In addition, based on Selam's brain development, Alemseged theorizes that Selam and her contemporaries experienced a human-like extended childhood with a complex social organization.

Fast-forward to the time when Neanderthals lived, about 130,000 – 30,000 years ago, and most paleoanthropologists would agree that language capacity among the Neanderthals was far more human-like than ape-like; in the Neanderthal fossil record, hyoids and other possible evidence of language can be found. Moreover, paleogeneticist Svante Pääbo's groundbreaking research in molecular anthropology strongly suggests that Neanderthals interbred with modern humans. Paabo's work informs our genetic understanding of relationships to ancient hominins in ways that one could hardly imagine not long ago—by extracting and comparing DNA from fossils comprised largely of rock in the shape of bones and teeth—and emphasizes the great biological continuity we see, not only within our own species, but with other hominins sometimes classified as different species.

Though genetics has made truly astounding and vital contributions toward biological anthropology by this work, it's important to acknowledge the equally pivotal role paleoanthropology continues to play in its tandem effort to flesh out humanity's roots. Paleoanthropologists like Alemsegad draw on every available source of information to both physically reconstruct hominin bodies and, perhaps more importantly, develop our understanding of how they may have lived, communicated, sustained themselves, and interacted with their environment and with each other. The work of Pääbo and others in his field offers powerful affirmations of paleoanthropological studies that have long investigated the contributions of Neanderthals and other hominins to the lineage of modern humans. Importantly, without paleoanthropology, the continued discovery and recovery of fossil specimens to later undergo genetic analysis would be greatly diminished.

Molecular anthropology and paleoanthropology, though often at odds with each other in the past regarding modern human evolution, now seem to be working together to chip away at theories that portray Neanderthals as inferior offshoots of humanity. Molecular anthropologists and paleoanthropologists also concur that that human evolution did not occur in ladder-like form, with one species leading to the next. Instead, the fossil evidence clearly reveals an evolutionary bush, with numerous hominin species existing at the same time and interacting through migration, some leading to modern humans and others going extinct.

Molecular anthropologist Spencer Wells uses DNA analysis to understand how our biological diversity correlates with ancient migration patterns from Africa into other continents. The study of our genetic evolution reveals that as humans migrated from Africa to all continents of the globe, they developed biological and cultural adaptations that allowed for survival in a variety of new environments. One example is skin color. Biological anthropologist Nina Jablonski uses satellite data to investigate the evolution of skin color, an aspect of human biological variation carrying tremendous social consequences. Jablonski underscores the importance of trying to understand skin color as a single trait affected by natural selection with its own evolutionary history and pressures, not as a tool to grouping humans into artificial races.

For Pääbo, Wells, Jablonski and others, technology affords the chance to investigate our origins in exciting new ways, adding pieces into the human puzzle at a record pace. At the same time, our technologies may well be changing who we are as a species and propelling us into an era of "neo-evolution."

Increasingly over time, human adaptations have been less related to predators, resources, or natural disasters, and more related to environmental and social pressures produced by other humans. Indeed, biological anthropologists have no choice but to consider the cultural components related to human evolutionary changes over time. Hominins have been constructing their own niches for a very long time, and when we make significant changes (such as agricultural subsistence), we must adapt to those changes. Classic examples of this include increases in sickle-cell anemia in new malarial environments, and greater lactose tolerance in regions with a long history of dairy farming.

Today we can, in some ways, evolve ourselves. We can enact biological change through genetic engineering, which operates at an astonishing pace in comparison to natural selection. Medical ethicist Harvey Fineberg calls this "neo-evolution". Fineberg goes beyond asking who we are as a species, to ask who we want to become and what genes we want our offspring to inherit. Depending on one's point of view, the future he envisions is both tantalizing and frightening: to some, it shows the promise of science to eradicate genetic abnormalities, while for others it raises the specter of eugenics. It's also worth remembering that while we may have the potential to influence certain genetic predispositions, changes in genotypes do not guarantee the desired results. Environmental and social pressures like pollution, nutrition or discrimination can trigger "epigenetic" changes which can turn genes on or off, or make them less or more active. This is important to factor in as we consider possible medical benefits from efforts in self-directed evolution. We must also ask: In an era of human-engineered, rapid-rate neo-evolution, who decides what the new human blueprints should be?

Technology figures in our evolutionary future in other ways as well. According to anthropologist Amber Case, many of our modern technologies are changing us into cyborgs: our smart phones, tablets and other tools are "exogenous components" that afford us astonishing and unsettling capabilities. They allow us to travel instantly through time and space and to create second, "digital selves" that represent our "analog selves" and interact with others in virtual environments. This has psychological implications for our analog selves that worry Case: a loss of mental reflection, the "ambient intimacy" of knowing that we can connect to anyone we want to at any time, and the "panic architecture" of managing endless information across multiple devices in virtual and real-world environments.

Despite her concerns, Case believes that our technological future is essentially positive. She suggests that at a fundamental level, much of this technology is focused on the basic concerns all humans share: who am I, where and how do I fit in, what do others think of me, who can I trust, who should I fear? Indeed, I would argue that we've evolved to be obsessed with what other humans are thinking—to be mind-readers in a sense—in a way that most would agree is uniquely human. For even though a baboon can assess those baboons it fears and those it can dominate, it cannot say something to a second baboon about a third baboon in order to trick that baboon into telling a fourth baboon to gang up on a fifth baboon. I think Facebook is a brilliant example of tapping into our evolved human psychology. We can have friends we've never met and let them know who we think we are—while we hope they like us and we try to assess what they're actually thinking and if they can be trusted. It's as if technology has provided an online supply of an addictive drug for a social mind evolved to crave that specific stimulant!

Yet our heightened concern for fairness in reciprocal relationships, in combination with our elevated sense of empathy and compassion, have led to something far greater than online chats: humanism itself. As Jane Goodall notes, chimps and baboons cannot rally together to save themselves from extinction; instead, they must rely on what she references as the "indomitable human spirit" to lessen harm done to the planet and all the living things that share it. As Goodall and other TED speakers in this course ask: will we use our highly evolved capabilities to secure a better future for ourselves and other species?

I hope those reading this essay, watching the TED Talks, and further exploring evolutionary perspectives on what makes us human, will view the continuities and discontinuities of our species as cause for celebration and less discrimination. Our social dependency and our prosocial need to identify ourselves, our friends, and our foes make us human. As a species, we clearly have major relationship problems, ranging from personal to global scales. Yet whenever we expand our levels of compassion and understanding, whenever we increase our feelings of empathy across cultural and even species boundaries, we benefit individually and as a species. 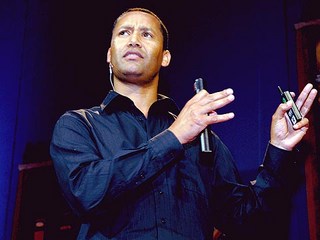 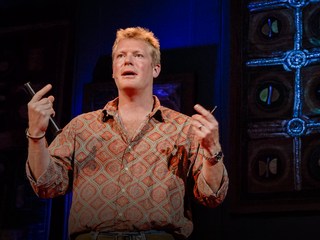 A family tree for humanity 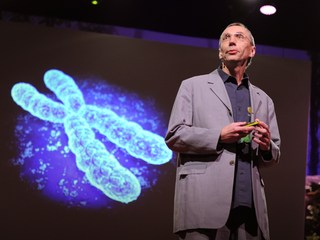 DNA clues to our inner neanderthal 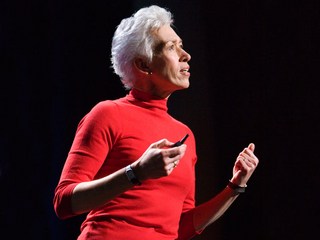 Skin color is an illusion 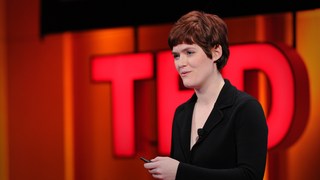 We are all cyborgs now 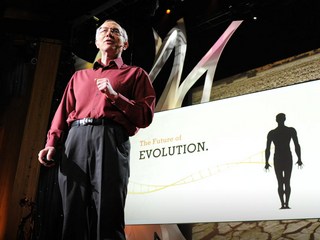 Are we ready for neo-evolution? 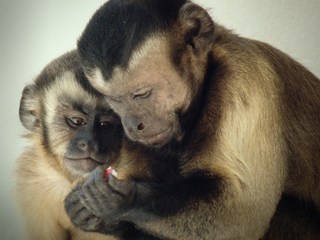 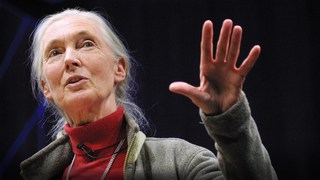 What separates us from chimpanzees?