TED-Ed Weekend is a youth conference that brings together student leaders from around the world for a chance to take over TED Headquarters in New York City.

TED-Ed Weekend showcases and amplifies the voices of the next generation of TED. It’s an opportunity for youth leaders around the world to connect, collaborate, and explore ideas that will shape their local communities and the global community. This annual conference includes inspiring performances, hands-on activities, and riveting TED Talks by members of the TED-Ed Student Talks program.

Audience:
The audience is about 35 groups of student representatives from their school or organization and is about 150 students overall. These students participate in the TED-Ed Student Talk program in their communities, with 24 countries represented at this event alone.

Connect: Students who attend TED-Ed Weekend get a chance to talk to potential mentors, meet youth leaders from different parts of the world, and form lasting friendships within the global TED-Ed student community.

Collaborate: Join hands-on media and animation workshops, workshops on community building and talk development, learn valuable new skills, and choose from a number of activities during the conference.

Explore: TED-Ed Weekend features an amazing lineup of youth speakers from around the globe. The TED-Ed team receives many video submissions of talks given by TED-Ed Student Talks participants, and the best of these talks are shared live in New York City during TED-Ed Weekend.

In order to attend TED-Ed Weekend, you have to apply first! Applications are available to TED-Ed Student Talks members only. To be considered as a speaker, students have to submit their talks at least 8 months before TED-Ed Weekend. Are you interested in attending, or know someone who would be? Learn more and apply now to bring TED-Ed Student Talks to your community so you don’t miss out on this global youth event!

Students who are not able to travel to New York City, can join TED-Ed Weekend virtually through TED World Theater. Learn more and sign up here!

Check out this video about TED-Ed Weekend 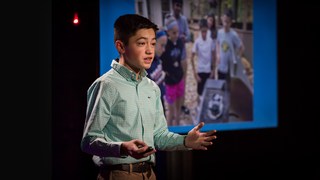 A plan to recycle the unrecyclable

How I found myself through music