ZigZag is a business show about being human. Join this zig-zagging quest with Manoush Zomorodi (Host of NPR’s TED Radio Hour; Fast Company’s 100 Most Creative People in Business) to discover new ways we can align our ambitions with systemic change that’s good for our fellow human beings. On Season 5, Manoush profiles six unusual dynamos reinventing business, their industries, and even capitalism in the name of humanity. It will change the way you see your work and yourself. 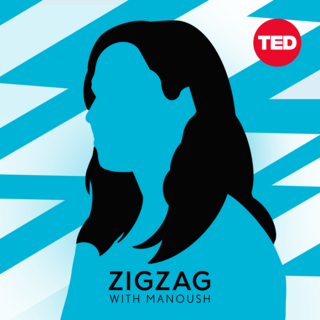 Manoush Zomorodi is the host of ZigZag and TED Radio Hour. She is a journalist, podcaster and media entrepreneur, and her work reflects her passion for investigating how technology and business are transforming humanity.

She has also created, hosted, and was managing editor of the podcast Note to Self in partnership with WNYC Studios, which was named Best Tech Podcast of 2017 by The Academy of Podcasters.

Prior to her time at WNYC, Zomorodi reported and produced around the world for BBC News and Thomson Reuters, including a few years in Berlin.

She was named one of Fast Company's 100 Most Creative People in Business for 2018 and has received numerous awards for her work including "Best Podcast Host" in the 2020 Webbys and The Gracie for Best Radio Host in 2014 and 2018. Her book "Bored and Brilliant: How Spacing Out Can Unlock Your Most Creative Self" (2017, St. Martin's Press) and her TED Talk are guides to surviving information overload and the "Attention Economy."

Zomorodi received a bachelor's degree from Georgetown University in English and fine arts. She is half-Persian and half-Swiss but was born in New York City, where she lives with her family.