Far Flung with Saleem Reshamwala is a journey across the globe in search of the world's most surprising and imaginative ideas. It's not a travel show, exactly. It's a deep dive into the ideas that shape a particular spot on the map, brought to you by local journalists and creators. Weave through the streets of Bangkok with a motorcycle midwife. Time-travel with dinosaurs behind a hardware store in New Jersey. Meet a guy who dresses up as a luchador to protect citizens from traffic in Mexico City. Drop in, listen up, dig deep.

(And yes, we used to be called Pindrop!) 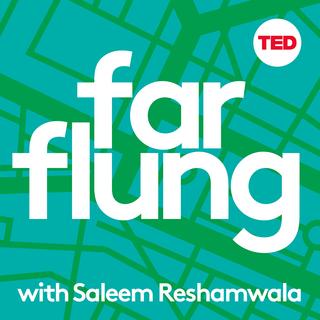 Saleem Reshamwala is a Durham, NC-based journalist and filmmaker whose recent work has focused on culture, ethnicity and music. Recent awards include Best Music Video at the Hip Hop Film Festival in Harlem (for G Yamazawa’s “North Cack”) and an Emmy-nomination for his work on implicit bias and race while at the New York Times. He's documented hip hop in Croatia, Morocco, Senegal, Ethiopia, Fiji, Panama and the Democratic Republic of Congo and has studied, worked or hung out in 50 countries.

Travel expands our horizons and opens our minds to new perspectives. With hundreds of hotels that span the globe, Marriott Hotels is your partner in exploring what the world has to offer you, and what you have to offer the world. Learn more at marriotthotels.com and let your mind travel. A member of Marriott Bonvoy.

Women Will is a Grow with Google program focused on women's economic empowerment. Active in 48 countries to date, it's helped inspire, connect and upskill millions of women. Check out the latest, learn more and join in on the conversation on our Instagram channel, @womenwill.