10 Reasons why you should ATTEND TEDxYouth@CityOfIndustry:
1. It is NOT a show but rather a Conversation on Our Shared Future and an amazing event to network with some of the most interesting people you'll ever meet in addition to hearing incredible IDEAS WORTH SPREADING!
2. There will be AT LEAST 10 speakers in the event ranging from talks of Quantum Physics to Environmental Politics to Mathemagics.
3. Food is Provided and it is all organic and healthy!:)
4. All Attendees will receive a profiled name badge that shows their interests and who they are (in addition to just their name) as well as a NETWORKING GUIDE of everyone present in the event.
5. There are NO Speaker-Attendee Barriers (unlike any other TEDx events) meaning the person sitting next to you might be the world-renoun Mathemagician or an AI Inventor working to create a system replacing data machines to intelligent softwares.)
6. Everyone (including our committee members) are able to partake a Networking Scavenger Hunt during intermission period that allows for a more comfortable situation to meet, have fascinating conversations and take pictures with the speakers and the really cool people attending plus get a free TEDxYouth@CityOfIndustry T-shirt once completed
7. We don't like the typical school chair seating so our seats will actually range from comfy chairs to sofas to even beanbags arranged in a way that maximizes the intimacy of each talk presented.
8. We have a highly spacious venue that is not only conversation sparking, convenient and cool, but some amenities include a giant octopus that hangs atop the food area- talk about a Daring Discovery!
9. We value everyone's ideas, thoughts, and opinions so much so that we created Project Discover (our initiative towards finding incredible student speakers) and the Global Initiative (aimed toward giving everyone a voice in the TED platform to promote TEDx and the event) We are ALWAYS taking Speaker Referrals. And thus we also have a Giant Wall of Ideas during the event that everyone would get to write on to share their Ideas Worth Spreading.
10. Our BIGGEST Goal is making it as accessible and affordable to the entire community as it cost only 10$ to ATTEND (generally TEDx Conferences cost $100) but hurry, our applications fill up soon especially because we are only taking 100 attendees so
APPLY TODAY at tedxyouthcityofindustry.com
______________________________________________________________________________
An Idea is So Powerful, once exposed, it impacts the way people view things and changes the world. With that, we start from the heart of it, the community, the power of LOCAL. Going into a joint system of areas that clearly are more than sheltered to the ground-breaking innovations made everyday. We aim to expose local students to Daring Discoveries from all over the world. Deriving from one local high school, we are now more united as a community, partnering with various schools in hopes that students will DISCOVER something DANGEROUSLY AMAZING and change the world with it.

Knowledge is POWER because IDEAS ARE DANGEROUS they IGNITE NON-conformity and they TRANSFORM lives.

TEDxYouth@CityOfIndustry is a joint community held and entirely student-organized TED event (previously TEDxGlenAWilsonHigh) that aims to empower and ignite a generation of radical youth that will have a critical knowledge and understanding of the world around them.
Our event especially focuses on giving young people a voice and the opportunity to experience a platform where their ideas are valued. A room filled with conversations of amazing thinker and doers on our shared future.

We believe that everyone should be exposed to the most daring and radical discoveries. These are the stories, ideas, and innovations people tend to associate with the notion of ‘Radical Openness’ and would take someone an extreme measure of boldness to present to any group of people either because they are either things that are unheard of or they break the norms of what we initially thought to believe about a certain aspect of the world.

Arthur Benjamin grew up in Cleveland, Ohio, and earned his B.S. at Carnegie Mellon University in 1983 and his PhD in Mathematical Sciences at Johns Hopkins University in 1989. Since then he has been a Professor of Mathematics at Harvey Mudd College, in Claremont, California, where he has served as department chair. His research includes Combinatorics, Game Theory, and Number Theory, with a special fondness for the Fibonacci numbers. He is past Editor of Math Horizons magazine, published by the Mathematical Association of America (MAA). In 2000, the MAA awarded him its national teaching award (the Haimo Prize) for Distinguished University Teaching. In 2006, he received the Beckenbach Book Prize from the MAA for "Proofs That Really Count". In 2012, he was selected by Princeton Review as one of The Best 300 Professors. In 1997, he applied his mathematical talents to the game of backgammon and won the American Backgammon Tour. Arthur Benjamin is also a professional magician, and frequently performs at the Magic Castle in Hollywood. One of his previous TED talks has been viewed over 5 million times, and is among the top 20 viewed. He is the author of several books, and four DVD courses from The Great Courses series, including "The Joy of Mathematics", "Discrete Mathematics", "The Secrets of Mental Math" and "The Mathematics of Games and Puzzles." He has demonstrated and explained his calculating talents to audiences all over the world and has appeared on numerous television and radio programs, including The Today Show, CNN, National Public Radio, and The Colbert Report. He has been featured in Scientific American, Omni, Discover, People, Esquire, New York Times, Los Angeles Times, and Reader's Digest. In 2005, Reader's Digest called him "America's Best Math Whiz."

Jason Alicea grew up on the east coast, first in Brooklyn, NY and then in south Florida. During college he unexpectedly became fascinated by physics and decided to pursue a research career in that field. This decision took him to the west coast, where he earned a physics Ph.D. at UC Santa Barbara and eventually became a professor at Caltech. His research explores new avenues towards "quantum computers" -- machines that have the potential to profoundly revolutionize society.

Paul Steinberg is Professor of Political Science and Environmental Policy at Harvey Mudd College.  He has spent the past 20 years studying biodiversity conservation and the human dimensions of global environmental problems.  He is the author of three books: Who Rules the Earth? (Oxford University Press), Comparative Environmental Politics (MIT Press), and Environmental Leadership in Developing Countries (MIT Press), which won the Harold and Margaret Sprout Award for the best book in international environmental affairs.  He is the director of the Social Rules Project, a multi-media initiative designed to raise public awareness about the importance of changing policies and other binding rules to promote sustainability.

Yolanda Gil is a computer science professor doing research on artificial intelligence systems that can collaborate with people to solve complex problems such as scientific discoveries. She was born in Madrid, Spain, and her family moved to Brussels, Belgium when she was young. Her fascination with math was sparked then, since she did not speak any French and yet she realized she could puzzle out the numbers that the match teacher would write on the board. She decided to become a computer scientist as soon as she realized that programming combines math with extraordinary amounts of creativity. After receiving her PhD from Carnegie Mellon University, she joined the Information Sciences Institute at the University of Southern California. She works on Discovery Informatics, developing intelligent systems that enable scientists to collaborate better in analyzing data across disciplines. She is also interested in the semantic web, which is the next generation of the web that encodes information and knowledge so computers can understand it and answer complex questions. She has more than 200 publications that span artificial intelligence, distributed systems, high-end computing, trust and provenance, data science, and a variety of scientific disciplines. She is the current Chair of ACM SIGART, the Association for Computing Machinery’s Special Interest Group on Artificial Intelligence. She has served in the Advisory Committee of the Computer Science and Engineering Directorate of the National Science Foundation, and helped establish a standardization effort for digital provenance at the World Wide Web Consortium (W3C). She was elected Fellow of the American Association of Artificial Intelligence (AAAI) in 2012.

Charu Sharma is a US-based Indian explorer, entrepreneur and author. With 5 National Awards, expeditions to all 7 continents, over 600 stage shows and two books in progress, this prodigy was enlisted as a “Power Woman” alongside such notables as Oprah Winfrey, Sonia Gandhi, Melinda Gates and Devita Saraf by Youth Incorporated magazine in March 2012. Charu has penned travel memoir Far From Shore inspired by her unexpected encounters with people and cultures around the world, and she is currently working on her second book Don't go with the flow on entrepreneurship. Charu has been involved with startups and VC firms in Silicon Valley and New York City, holds business certificates from the Stanford GSB and the Tuck School of Business at Dartmouth, and she has previously worked with NASA Scientists, researchers in Antarctica, Bankers at Wall Street, senior journalists and top politicians. At 21, she is currently studying Astronomy and Economics on a scholarship in Massachusetts at Mount Holyoke College, the first institution in the US where women could get college education.

Dr. Wenli Jen is an educational consultant, motivational speaker, writer, community leader, businesswoman, professor and nonprofit program director. As a second-generation Chinese American woman, Dr. Jen speaks about cultural competency, community collaboration, education and other related topics in national and state conferences. Her expertise in human development, psychology, and education has made her advice valuable to several communities. Dr. Jen obtained her doctorate in Educational Leadership from USC, master’s degree from Harvard University, and B.A. from UC Irvine. In addition, Dr. Jen is a licensed esthetician and credentialed teacher. She has two published stories in the Asian American anthologies, Pho for Life and Miso for Life and is a featured speaker for TEDxPCC in November 2013. Dr. Jen can be seen on television as a co-host and producer for Time Warner Cable shows including Heart and Soul, a women’s talk show and Showtime, a film and production review. Dr. Jen is also the 2012 Woman of the Year for the 24th Senate District of California and the 2013 Woman of the Year for the 49th Assembly District of California. Dr. Jen serves on the board of the National Women’s Political Caucus and works with United Nations Global Compact and UN Women – US National Committee.

Miguel Almena is a designer, educator and advisor on education in 3D Printing to government, non-profits, education and art sectors. He was formerly a designer for The Walt Disney Company and brings over a decade of experience to 21st Century Learners. His goal is to help schools and organizations routinely create opportunity for themselves by cultivating their creative identities through emerging cutting edge technologies that increase student/employee performance, motivation, engagement and retention. Currently his work involves a student collaboration on the enhancement between physical and digital environments by applying design principles inspired by nature, and implementing them in emerging digital design technologies. Areas of application include product, architectural design, digital fabrication and construction.

Dr. Talithia Williams is an Assistant Professor of Mathematics at Harvey Mudd College. Her professional experiences include research appointments at the Jet Propulsion Laboratory (JPL), the National Security Agency (NSA), and NASA. Dr. Williams develops statistical models that emphasize the spatial and temporal structure of data with environmental applications. She has been recognized for the development of a cataract model used to predict the cataract surgical rate for developing countries in Africa. In addition to her academic accomplishments, Dr. Williams is also a woman of faith, living out a lifestyle practice infused with bold splashes of servitude that embody the eternal ideals of God. She and her husband, Donald, actively teach and share foundational principles regarding the joys of Christian marriage. Dr. Williams’ talk will explore how each of us can begin to collect data about ourselves that can provide insight into our personal health. 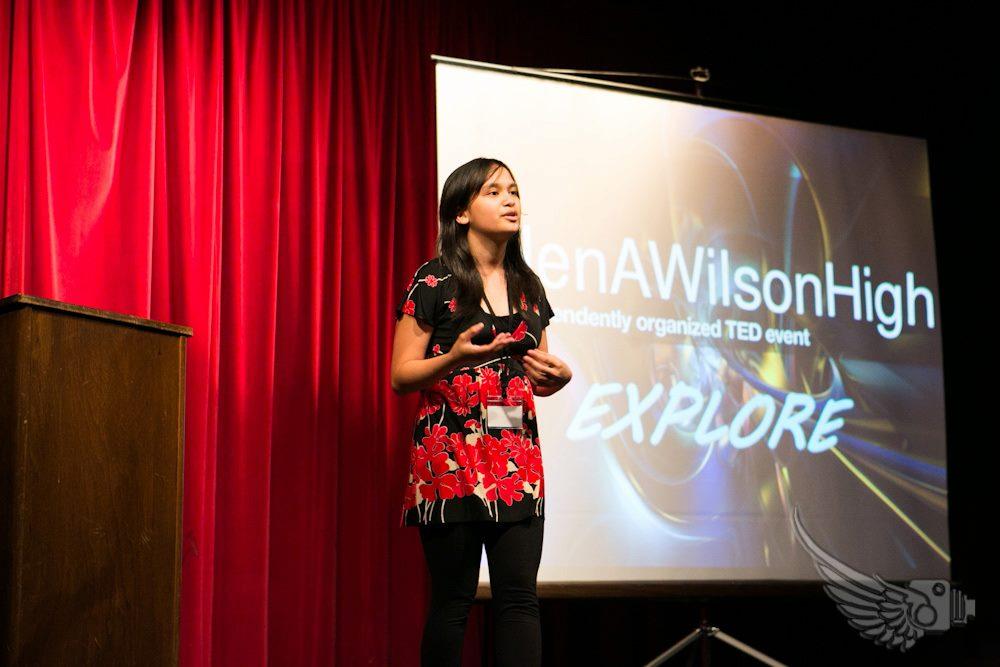