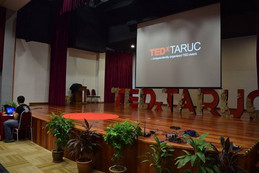 Born in the year of 1988, Carey Ng is currently the director of Miss Universe Malaysia Organization, model, and also the titleholder for Miss Malaysia 2013. Since young, Carey practiced non-stop in dancing wanting to be a choreographer. However, her dreams were crushed due to her accumulated injuries when she was 17. She dealt with that chapter of her life and channeled her energy in studying architecture. Upon graduation, Carey joined Miss Malaysia to challenge herself and has since benefited from her leap of faith.

Dennis Lau is one of the youngest violinists to achieve Grade 8 accreditation from the Royal School of Music. Dennis had once performed in the presence and honour of our late Sultan Azlan Shah (Sultan of Perak). While performing in the Islamic Fashion Festival, he had Stella McCartney (Creative Director of Olympic 2012 by Adidas), Princess of Monaco and other dignitaries as his audience.

Dr Salawati who is currently a senior lecturer in law at the National University of Malaysia obtained her PhD from UKM. She has provided consultation to the Malaysia Nuclear Power Corporation on the Development of Nuclear Power Plant in Malaysia. Being an expert in migration and refugees law, the Malaysian Social Research Institute has also consulted her on the issue of Palestine’s Occupation and human’s right.

Currently the Associate Dean in the Faculty of Engineering and Built Environment, Tunku Abdul Rahman University College, Dr Yip is in charge of the Department of Mechanical Engineering. He is a big fan of TRIZ and believes that innovative problems solving skill is the key to solve most of the problem in life. He helped students out in the process of developing their ideas and imagination into real and workable design that will change the world of engineering.

Being an engineer at heart, Frank has always been interested in building things from the ground up. He is currently the managing director for Orange internet Shop, Orange Property Group, Orange E-sports and also Skyler Tech Solutions. Skyler Tech is a Multimedia Super Corridor (MSC) status company which focuses on the development of SKY LAN Manager while Orange E-sports is the leading E-sports team in Malaysia on the look-out for pro gamers. It is currently one of the biggest gaming organizations globally and has been investing in companies of the gaming industry.

As an ex-Tarcian, Heislyc has been actively participating in the rising field of social entrepreneurship. Having the passion to lead and shying at nothing, Heislyc is currently the community ambassador of the Malaysian Global Innovation & Creativity Centre (MAGIC). He is in charge of connecting the community of entrepreneurship and educating startups in solving real life problems. He has also founded some new startups such as CoRate which is used to organize and summarise articles based on the interests of its users.

Being one of the pioneers of the Youtube industry in Malaysia, he is currently a famous internet celebrity in Malaysia. Initially a student of interior design, he once had a camera and a deep desire to try out new things, Joseph decided to experiment on making Youtube videos in 2011. This has led him to be the founder of Germani Productions and also made him nominated as the Top Asian Entrepreneur in The Asian Entrepreneurs website.

As a person who is always curious and willing to try new things, Shawn Tan is now a ‘chip doctor’, chartered engineer, entrepreneur, and also a law graduate. Even before completing his Phd from Cambridge and his undergraduate studies, Shawn found his passion in the designing of integrated circuits. Currently, his company, AESTE is home to the world’s fastest and smallest 32-bit multi-threaded RISC microprocessor core.

Having the opportunity to join a magic club a few years back has made him one of the most famous magician and mentalist in Malaysia. Zlwin has the opportunity to perform for VVIPs such as Raja of Perlis (Raja Syed Sirajuddin) and the former Prime Minister of Malaysia (Tun Dr Mahathir Mohamad). Zlwin has also performed globally in the Philippines, India, Arab, Australia, Hong Kong, Maldives, and Turkey. To add more to his fame, his Twitter account has also been acknowledged by one of the greatest magician of all times – Mr David Copperfield.