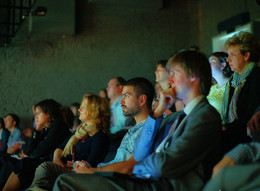 TEDxPerm Conference | The Art of Being took place on September 17 at "Stsena-Molot" Theater. Those who did not register for the conference and could not listen to the speakers in person had an opportunity to watch TEDxPerm webcast.

The conference went for 5 hours, during which 12 outstanding speakers talked to the participants about their achievements, inspiration, innovation, and scientific discoveries.

Sergey Kapitsa, a renowned scientist, proposed ways to restore the scientific potential of Russia in the context of globalization. A physicist Yuri Raikher gave a fascinating talk about the properties of magnetic nanoparticles. Olga Troitskaya, a psychologist, explained why people are scared of true emotions. An Indian entrepreneur Premchand Yadav presented his IT education project, through which over 173 thousand children from 400 schools have an opportunity to learn computers and explore the global net. Yana Frank, an artist and an illustrator, discussed why inspiration is the most important thing in art. Maksim Kronhauz, a linguist, reminded the audience about the words which the Russian language loses every day and proposed the creation of a Museum of Words.

During the break, participants could personally meet and talk to the speakers. In the second part of TEDxPerm, Cynthia Bouthot talked about the importance of venture funds. The theme of innovation and entrepreneurial freedom was continued by an investor in the field of biopharmaceutics, Evgeny Zaitsev. A linguist and simultaneous interpreter Dmitry Petrov shared his ideas about the science of new language acquisition. The founder of Russian leading Internet news sites Anton Nossik presented his philosophy of startups. An entrepreneur and business consultant Armen Petrosian reminded the participants that personal success depends only on the person himself.

The conference concluded with the talk by Director of Perm Museum of Modern Art (PERMM) Marat Guelman, who shared some life stories proving that success is impossible without trusting people. Between the talks, the audience saw recorded TEDTalks.

According to participants, TEDxPerm was an important event in Perm. Informal talks given by famous people, an opportunity to talk to speakers and a unique creative environment built a common space for spreading and implementing ideas.

According to Anton Nossik, "the impact of such events cannot be overestimated. When a group of bright and interesting individuals meet other bright and interesting individuals, who are not afraid of sharing their ideas and thoughts, which sometimes seem crazy and ahead of time, they get a desire to start sharing their own ideas and attracting followers."

One of the participants, Senator Sergey Gordeev, noted that "the level of speakers and the conference itself was very high, which makes it absolutely necessary to continue developing this format in our country. Support and promotion of such project as TEDx is important for those who are interested in innovative future of Russia."

is an expert in business development and innovation. She is one of the founders of Russia Innovation Collaborative and serves as President of the Collaborative Innovation Group, as well as head of UKTI Innovation and R&D programs, where she is working across the US to leverage innovation hubs more effectively. Ms. Bouthot was previously Consul Head of Trade and Investment at the British Consulate Boston. Cynthia holds a BS from Boston College with a major in Finance and a Masters in International Economics and Finance from Brandeis University.

Best known online as Miu Mau, Jana Frank is a well known artist, illustrator and creative director. She is the author of Maniac-Designer Diary and The Muse and the Beast. Her highly popular blog at LiveJournal is a reflection of her world, full of images and verbal sketches, thoughts about things eternal and transient, recipes for inspiration and creative ideas. Being a talented inspirer, Jana writes articles and books on how to get ahead in creative professions without cutting the Muse's wings. She provides sure recipes of saving major creative projects and ruining them as fast as possible.

was born in Kishinev (Chisinau, Moldova) in 1960. In 1983 he graduated from Moscow Institute of Communications. Since 1998 he collects modern art and organizes exhibitions. In 2005 he founded a Foundation for Modern Art Assistance. In 1990, Marat founded one of the first private galleries in Moscow. In 1999-2000 he organized over 20 non-official art festivals all over Russia. He currently serves as Director of Perm Museum of Contemporary Art (PERMM) and is a member of the Public Chamber of Russia since 2010.

PhD, Philology, is a famous linguist, Head of the Russian Language Department, Director of the Institute of Linguistics at the Russian State Humanities University, who penned multiple scientific monographs and textbooks. An alumnus of the Philology Department of the Moscow State University, he worked as scientific editor at the "Soviet Encyclopedia" Publishing House and participated in creating the "Linguistic Encyclopedic Dictionary". He is the author of Semiotics, or the ABC of Communications; Prefixes and Verbs in the Russian Language; Semantics. In his popular science bestseller The Russian Language on the Verge of a Nervous Breakdown (2007), he calls upon his readers not to get too emotional about the current state of their language. Maxim Kronhaus has been very active in academic and public discussions regarding the current state of the Russian language, arguing that the way today's Russians speak could not only be an object of criticism, but also an object for scrupulous scientific investigation.

is a famous blogger, journalist, startup manager and public figure. Anton was born in Moscow in 1966. He is the founder and first editor-in-chief at leading Internet news projects: Gazeta.ru, Lenta.ru, Vesti.ru, NTV.ru (NewsRu.com), BFM.ru. He is the founder of Internet Foundation Pomogi.org. In 2009 his universal non-search reference website WhoYOUgle received Runet award.

is a linguist, who knows 30 different languages and does professional simultaneous interpretation in 8 of them. Dmitry graduated from the Translation Faculty of the Moscow State Institute of Foreign Languages. He serves as senior lecturer at Translation Faculty of the Moscow State Linguistic University, where he coordinates the group of simultaneous interpreters. He had experience with all types of translation and interpretation and worked at the heads of state level. Dmitry Petrov is an author of some rapid language learning methods, including parallel learning of several languages. He organized a number of expeditions to Himalayas and other parts of India. In February 2008 he was the coordinator of Russia's Book Fair in Dehli, which was held as part of the Year of Russia in India.

is a successful entrepreneur, business consultant, owner of a media agency, a popular blogger, and a father of two. Armen publishes "Our Solikamsk" newspaper and a business journal "Business NS". He is a founder of a business lab – a so-called "ideas atelier", which helps clients discover new development opportunities. Armen's talents are diverse, while the number of his fans and followers grows with every new post in his blog, where he investigates performance improvement tools and fearlessly tests them on himself. Check out "Living is interesting" at www.petrosian.ru

PhD, Physics and Mathematics, is the Chief of Anisotropic Liquid Lab at the Institute of Mechanics of Continua of the Russian Academy of Sciences. He studies theoretical physics and is one of the authors of the ferronematic theory – liquid crystals filled with magnetic nanoparticles. He is an author of many publications, actively collaborating with universities in Brazil, France, and Germany. In 2009 his outstanding achievements in science were recognized with the Perm Krai Prize (1st degree). In 2010 he was awarded the national medal of order "Merit for the Fatherland" (2nd degree).

is a famous psychologist, consultant, and family therapist. She runs her own "Olga Troitskaya Workshop", where she conducts trainings and seminars on the psychological aspects of family relationships and managing stressful situations. A graduate of the Psychology Faculty of the Moscow State University, she has more than 20 years of psychotherapy experience and is the head of Educational Kinesiology Program at the Center for the Development of Interpersonal Communications. She also spent 10 years studying psychological perception of theatrical performances among teenagers. In 2009 she was featured in a series of popular science films, where she discussed family relationships "Happily Ever After: All About Man, Woman, and Family".

was born and lives in India, where he runs his own firm, Sanchar Infotech Private limited, which brings computer education to children in public and low-cost private schools that would not have access to computer education otherwise. His firm currently serves over 400 schools with over 173,000 pupils. His company also provides skills development and entrepreneurship programs for young adults, and has served over 4,500 people to date and funded 12 entrepreneurial projects. Premchand contributed to many educational publications. He served as Area Coordinator Committee of Resource Organization for Literacy, Treasurer of Suvidha Cooperative, which was established to manage an integrated waste management project. Currently he serves as Director of CAL & IT Training Program and is a member of the Board of Trustees of InfoTech Pratham Foundation. Premchand holds a bachelor's degree in sociology from Tilak Maharashtra University and Master's in Resource Mobilization and Management from S.P. Jain Institute of Management & Research. He is also a recipient of a highly prestigious Eisenhower Fellowship.

is the founder of CEO of Helix Ventures, a professional venture capital investor in medical and biopharmaceutical fields. He is a member of boards of several biomedical companies in Silicon Valley. Prior to founding Helix Ventures in 2008, he was a partner at Asset Management Company, one of the oldest venture capital firms in Silicon Valley, and is responsible for building up its successful biomedical portfolio. He actively supports non-profit entrepreneurship organizations and is one of the founders of the US-Russia Technology Symposium at Stanford University, annual "Silicon Valley Open Doors" investment conference, as well as a member of the Board of Trustees and former president of American Business Association of Russian-speaking Professionals (AMBAR). Evgeny is an author of multiple scientific and business publications on entrepreneurship and venture capital. He graduated from Altai State Medical University with honors in 1991. In 1993 he defended his PhD in medicine, and in 2002 he received an MBA from Stanford University.

PhD, Physics and Mathematics, is a Professor and Chief Research Associate at the Institute of Physics Problems named after P.L. Kapitsa, a member of the Russian Academy of Natural Sciences and European Academy of Sciences. He serves as editor-in-chief of "In the World of Science" journal. Sergey Kapitsa is an author of multiple scientific works in the areas of aerodynamics, accelerators, electrodynamics, synchrotron radiation, nuclear physics, history of science, population and demography, education methods and practice. He is the author of Science and Life and General Theory of Population Growth books. He has been the host of a popular science program ("The Obvious and the Incredible") on the Russian television since the 1970's. 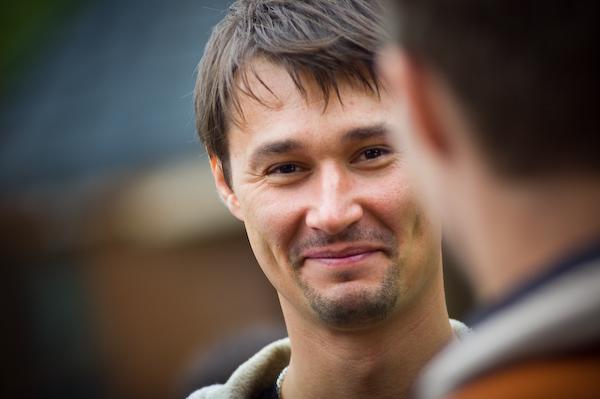