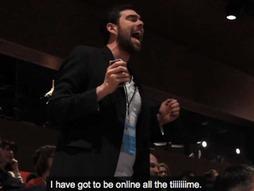 The cast and credits for the TED mission:

The cast and credits for the Gel mission:

The ideas behind a prank: Q&A with Charlie Todd

As may or may not have been clear from reading the internet today: it’s April Fool’s Day. At TED, it came a bit early: At TED2012 Charlie Todd staged a beautifully colorful prank. An actor (Eugene Cordero) played a speaker who had a technical difficulty with his talk, and then another, and then another, and… then […]

Improv Everywhere’s rainbow wheel of death at TED2012: Another view

Photo and video: James Duncan Davidson. Music: Tyler Walker Our photographer James Duncan Davidson made this great little video from all the hundreds of photos he snapped during Improv Everywhere’s prank on TED2012. Watch the whole prank … and learn more about how they did it.