Help me discover new cures for brain disorders utilizing a responsive neurostimulator computer device implanted into the cranial bone connected by wires to electrodes in the brain.

Create the final design for a portable Transcranial Magnetic Stimulator (TMS) that can erase a migraine headache without drugs.

Create a Brain Trust to rethink our approach to medical liability.

In 2011, the Transcranial Magnetic Stimulator (TMS) device allowed patients to have a drug-less means to relieve the pain of migraine headaches. Fischell's first wish, now known as a Responsive Neural Stimulator (RSN), has been shown to cure about 10% of all incurable epileptics who have used it. Additionally, 60% of all patients who used an RSN demonstrated at least a 50% reduction in seizure rates.

Robert Fischell invented the rechargeable pacemaker, the implantable insulin pump, and devices that warn of epileptic seizures and heart attacks. Yet it's not just his inventive genius that makes him fascinating, but his determination to make the world a better place.
Learn more about Robert 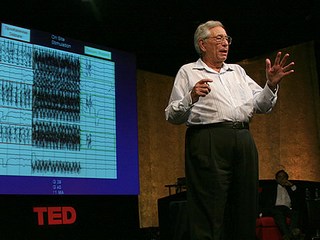