I wish to bring the world together for one day a year through the power of film.

Develop “Pangea Day,” a day which seeks to help people see themselves in others through the power of film. Create partnerships that enable the films to be viewed internationally, on the internet, and on mobile devices in many languages. Plan an extraordinary lineup of speakers and musical performers to host and accompany the film events.

On May 10, 2008, millions gathered to watch Pangea Day, a 4-hour program of short films from around the world interspersed with inspirational talks and global music. Public events were hosted around the world, and films were viewed by thousands in 105 countries. So far over 1 million viewers have watched the first 20 minutes of Pangea Day on YouTube. Pangea Day's total number of YouTube views is approaching 8 million.

2006 TED Prize winner Jehane Noujaim is the gutsy filmmaker responsible for Control Room, an astonishing documentary about Al Jazeera's coverage of the Iraq war and the contrasting notions of truth expressed in the US media.
Learn more about Jehane 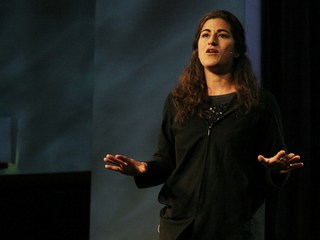 My wish: A global day of film